Writing for First Sports, Saj explains why the manner of New Zealand batting’s destruction and the success of his own side would have been heartening for the Pakistan head coach who felt that his team had conquered and laid to rest the demons of the first Test. 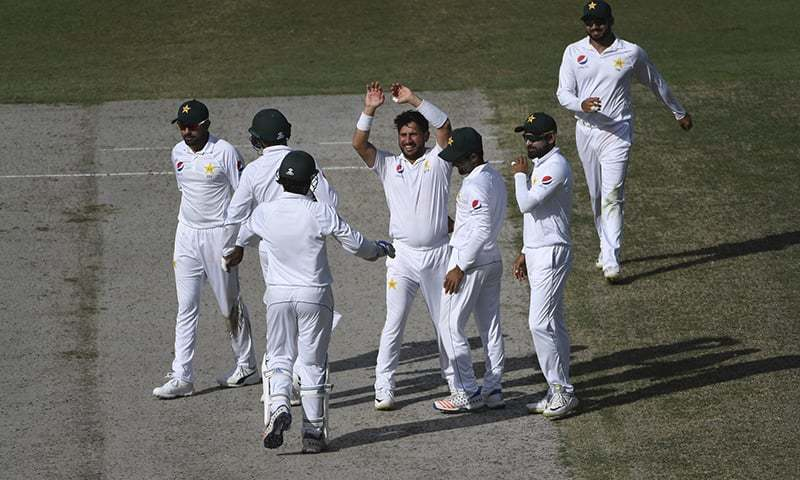 Nothing seemed to be out of the ordinary as the first Test between Pakistan and New Zealand entered its penultimate day. A Pakistan Test side relying on its bowling attack to put themselves in a position of dominance against a visiting team in the UAE was an expected outcome and something which observers of the game in the region had seen many times before.

Set a modest target of 176 on a placid pitch, Pakistan looked well on their way to a comfortable victory on Day 4, which would have given them a huge morale boost and set the tone for the rest of the three-match Test series. After all, they had dominated proceedings for most of the contest and it stood to reason that the home side would saunter home without too many hiccups.

However, those who follow Pakistan cricket would have known in their hearts that when it came to anything simple, their team had the ability to defy logic and confound observers without any prior warning.

In what could only be described as an hour of madness, Pakistan’s position of 130/3 descended from shaky to disastrous as batsman after batsman decided to outdo each other in ways of losing their wickets. Thus, from a position of relative strength at 130/3 to the ignominy of being 171 all out, Pakistan virtually snatched defeat from the jaws of victory.

As a shell-shocked Pakistan side struggled to come to terms with the loss, the Pakistan head coach Mickey Arthur described the loss as probably one of the worst defeats he had suffered in his career, a sentiment many of the millions of followers of the Pakistan team would have agreed with whole-heartedly.

With New Zealand now instilled with a new sense of purpose and confidence, which was given a healthy boost by Pakistan batting’s capitulation in the first Test, it was clear that something special had to happen for Sarfraz Ahmed’s men to overturn the momentum gained by Kane Williamson’s team.

Outwardly, there was no real reason to panic for Pakistan as they had done well during most parts of the first Test, but the demons in the heads of Pakistani batsmen were undoubtedly a worrying sign for the team management.

Did Pakistan get the team combination wrong for the first Test? Did their batsmen lack the skills to handle the likes of Trent Boult and Ajaz Patel — the star bowler in Abu Dhabi — and would these bowlers continue their domination in the second Test in Dubai? The signs were worrying, but Arthur had other plans as he set about repairing the mental scars of the fiasco in Abu Dhabi.

Whatever was said behind closed doors in team meetings before the second Test seemed to yield positive results with Sarfraz calling right on Day 1 of the match in Dubai. Pakistan openers then fell prey to some good quality swing bowling which may well have reignited some fears in the dressing room of impending doom. It was then left to the likes of Azhar Ali, Haris Sohail and Babar Azam to fashion some partnerships which took Pakistan to a safe and fairly secure score, allowing the skipper to declare at 418/5.

Whereas in Abu Dhabi, Pakistan batsmen seemed hell bent on moving the scoreboard without much care for the consequences, the approach to batting at Dubai was a cautious one. To many new followers of Test cricket, this would have been the equivalent of watching paint dry but to those who had seen Pakistan succeed before in the UAE, the home-side’s batting effort was a textbook example of attritional cricket. The idea being to grind down the opposition without undue risks, something which would have made the stalwarts in Younis Khan and Misbah-ul-Haq proud of their younger successors.

Babar Azam had been out on 99 in the series against Australia but his perseverance against a top-quality bowling attack shone through as he finally crossed the line to score his maiden Test hundred. The other centurion for Pakistan, Haris Sohail, had been guilty of throwing away his wicket after several good starts but in Dubai, he demonstrated a much more mature version of himself to end up as the highest scorer with 147 runs to his name.

And then there was Yasir Shah. He had been out of Test cricket for almost a year due to an injury and seemed out of form in his comeback series against Australia in the UAE. But as many who had followed his career and performances in the past knew better, it was near impossible for him to be kept out of the game for long. His mother had passed away only a few weeks ago and he could have been forgiven for any lacklustre performance due to this personal tragedy, but what the world of cricket saw in Dubai was a spin-maestro at the top of his game. In a half-hour spell of quality bowling, Shah combined with the ever-improving Hasan Ali to end-up with eight wickets and demolish the New Zealand batting as they were rolled out for 90. Pakistan then enforced the follow-on and just as it seemed that New Zealand could make a match out of it, Shah swooped in on Day 4 to pick another six wickets to take his personal match tally to 14 wickets and help his side to an innings victory.

The manner of New Zealand batting’s destruction and the success of his own side would have been heartening for the Pakistan head coach who felt that his team had conquered and laid to rest the demons of the first Test. If Williamson’s side felt on top of the world after their victory in Abu Dhabi, they were swiftly brought to the ground by re-energized and fired-up hosts, and if Pakistan can carry the momentum to the next match, tougher times could be in store for the Black Caps in the series-decider in Abu Dhabi.