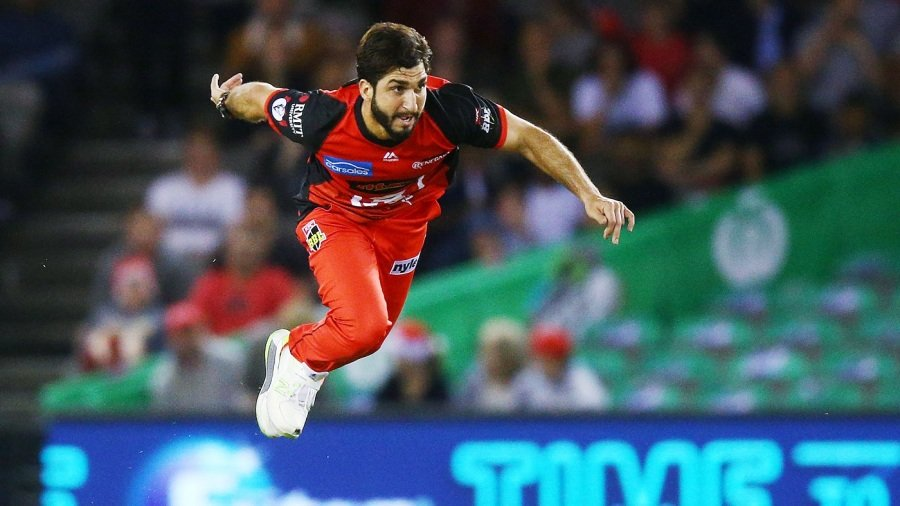 Pakistan’s recent struggles in South Africa during the Test series seem to have drawn a lot of unwelcome attention for one of world cricket’s most respected sides. Whilst Pakistan’s batting woes in all formats of the game are an open secret, what has been particularly painful for many followers of Pakistan cricket is the lack of fire-power in the fast-bowling department. It is in this context that the news of Usman Khan Shinwari’s exploits during his recent stint in the Big Bash League tournament has provided a positive outlook for Pakistan in the area of fast-bowling.

In his debut BBL season where he played for Melbourne Renegades and picked up 8 wickets in 7 games, Shinwari showed why his selection for the Melbourne side was met with approval when it was announced and in an exclusive interview with PakPassion.net, spoke about his experience of playing in one of the most well-established Twenty20 leagues in the world.

“This was an exciting time for me as this was my first experience of the Big Bash League. It was very enjoyable and a great learning experience as the quality of cricket being played in the BBL was excellent and the games were highly competitive. Also, the whole team environment was very pleasant which really helped me concentrate on delivering my best for the Renegades. The crowds in the BBL games were simply amazing and I really loved performing in front of such enthusiastic crowds. The experience of playing in front of such audiences has to be seen to be believed and I am glad I got that under my belt in this BBL.”

A veteran of the 2017 and 2018 editions of the Pakistan Super League where he took 22 wickets for Karachi Kings, the move to the BBL seemed like a natural progression for the 25-year-old pace bowler and as he explained, participation in both leagues has given him a unique opportunity for an excellent learning experience, “I consider myself lucky that I have had the chance to play in the PSL and the BBL which are both very high-class Twenty20 tournaments. Whilst PSL is a newer competition, the Big Bash has been around for a while but it’s difficult to say which is better as both tournaments present different challenges and as far as I am concerned, PSL and BBL are both excellent competitions for players to learn new skills and are also a great experience for the spectators as well.”

“Obviously when you come to a top-class tournament such as the BBL, your only aim is to perform well for your side and impress everyone. I wanted to take as many wickets as possible during my time here but most importantly, I wanted my contributions to help the Renegades win matches and hopefully later on, win the tournament as well.”

Afghanistan’s Mohammad Nabi and Usman Khan Shinwari have been friends and colleagues for many years and were part of the same BBL side as well. For Shinwari, playing alongside his friend brought a special satisfaction and provided a degree of comfort which helped him settle down in the side and he had many words of praise for the Afghanistan player, “Mohammad Nabi is a senior player and I really do respect him a lot as he has played a lot of franchise cricket in tournaments such as the IPL, CPL and BBL and also has a lot of international experience as well. I know him well as for the last 10 years, we have also played club cricket together, so we also know each other’s game really well. Playing alongside Nabi is always very enjoyable and watching him bat and bowl is always a great experience for me.”

With the likes of well-established competitions like the IPL, CPL, BBL, BPL and PSL it would appear that there is an oversupply of Twenty20 Leagues around the world. However, from Shinwari’s point of view, there is no such thing as too much cricket, as playing in different leagues offers a unique experience and also allows for his professional development which is also beneficial for his international career.

“Playing for the national side is everyone’s dream but with so many good quality Twenty20 Leagues happening around the world, it is also important for players to experience this type of cricket as it can really help improve their skills. For me, the experience of playing in different conditions and on pitches which are not the same as we have at home is an amazing one. I am convinced that playing in such leagues not only helps you test and develop your skills against some top-class players, but it also helps in building confidence in your own abilities which will be beneficial for me when I represent Pakistan in the next series I play for them.”

Pakistan Test captain Sarfaraz Ahmed recently lamented the lack of speed amongst Pakistan fast-bowlers but if he had been paying attention to the BBL and especially to Shinwari’s spell against Melbourne Stars, he would have been pleasantly surprised to see one of his bowlers bowl extremely fast. Shinwari’s express delivery which was clocked at 151 KpH was a pleasant surprise for many but was a feat that one should have expected given his role model.

“If there is one bowler who I consider my role model, then that is Shoaib Akhtar. I especially loved the way he could bowl at such quick speeds and take wickets, and that is what I am also trying to do every time I come in to bowl. In the game against Melbourne Stars, I was able to bowl that 151 KpH delivery as I was feeling that my rhythm was very good. Throughout that spell, I was saying to myself to bowl at the fastest speed I could and thankfully that worked and I produced that really quick delivery.”

The well-funded and sophisticated sports facilities in Australia would have been an eye-opener for someone like Shinwari who has been plying his trade in Pakistan for most parts of his career and those looking to improve the state of Pakistan’s domestic cricket would be well advised to pay heed to his views on the subject.

Many Pakistan players of the past have emphasised the utility of playing in County cricket in terms of the professional development of younger players. For Shinwari, participation in County cricket is an important aspect of his progress and can also benefit Pakistan as well.

“With some good experience under my belt from playing in leagues such as the PSL and BBL, I feel that I will also greatly benefit from playing in England for a County side in T20 and One-Day tournaments if the opportunity arises. Apart from my professional development, I also feel that my experience of playing in England can also help Pakistan if I get a chance to play in the World Cup or in the next tour of England so there are clearly a lot of positives of playing in County cricket and it's something that I would like to do in future.”

Pakistan’s recent dismal record in Tests has been a cause for concern for many ardent supporters of the side. The seemingly low supply of good talent to the national side is being touted as a major factor in the steady decline in Pakistan’s fortunes as a Test playing nation but if Shinwari’s steady rise is any indicator, Pakistan could well have an excellent Test player in their ranks in the near future.

“If you ask any top-class player, they will say that the real challenge for any cricketer lies in Test cricket and I also believe that. I would really like to play Test cricket for Pakistan one day and that remains my aim. However, I also know I have to work very hard to achieve that goal but God Willing, I hope to be selected for the Pakistan Test squad in the future.”

The eyes of the world of cricket are slowly but surely focusing towards the next major ICC tournament which will be the World Cup in England. To be played this summer, the 10-team tournament will feature some of the most exciting and strong teams of world cricket. As 2017 Champions Trophy winners, Pakistan have a reason to feel optimistic with Shinwari confident that his side has the capability to lift the Cup in July of this year.

“Pakistan has excellent Twenty20 and One-Day sides and the teams have excellent balance of good batsmen, all-rounders and fast-bowlers. Obviously, the upcoming World Cup will be a tough competition as its been held in England and the top teams of the world will be competing for the trophy, so it will not be easy for any team. But I am convinced that with the group of players we have now, we have the ability to take on the toughest of teams and we will try and win the 2019 World Cup.”

The advent of the Pakistan Super League in 2016 gave a new lease of life to Pakistan cricket which seemed to be lagging behind in terms of providing entertainment to its millions of stakeholders. Now approaching its 4th season, the PSL is considered as one of the most exciting tournaments in the cricket calendar and understandably, Usman Khan Shinwari is excited about taking part in the upcoming tournament and has set some very high goals for himself. “I am really excited about the upcoming PSL season. It’s a unique opportunity to play in Pakistan’s top Twenty20 tournament and I really cannot wait to be playing for Karachi Kings for the third time. Not only do I wish to participate in PSL 4, but this time around, I would like to take as many wickets as possible and am aiming to win the award for the best bowler of the season as well,” he concluded.