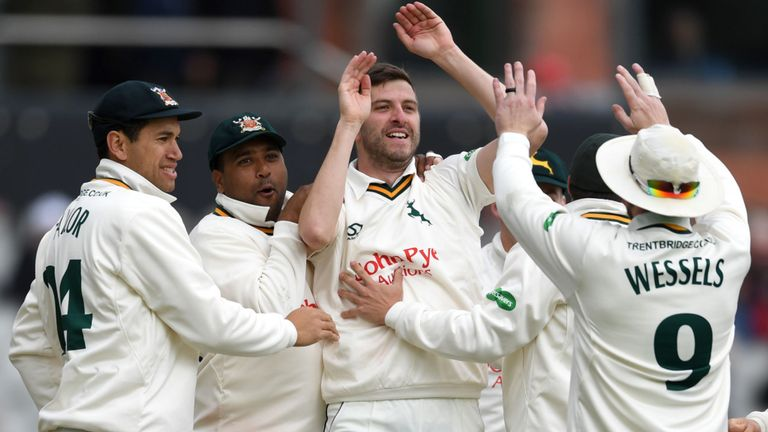 Nottinghamshire's Harry Gurney hopes enhancing his Twenty20 credentials in the Pakistan Super League will help him to catch the eye of England's selectors.

Gurney, who has 10 ODI and two T20I caps to his name, made his Quetta Gladiators' debut this week and is relishing the chance to play against top-notch opposition.

"When the draft results for the PSL came through and I found out that I'd been selected, I was delighted as this was an opportunity to come over and mix with people who play in different parts of the world and try and learn from them," he said.

"Ultimately, wherever I play cricket, I want to try and win trophies, so even here that will be the number-one objective and I believe we can do that as we have a strong squad."

With many Twenty20 tournaments around the world now testing the skills of a multitude of players, it is important for cricketers like Gurney to be convinced that, apart from the financial rewards of playing in lucrative franchise-based tournaments, they also gain from the experience of playing in high-quality competitions such as the PSL.

"I am very impressed with the standard of cricket in this tournament which has a good mix of local and foreign talent," said Gurney. "It's a strong competition with lots of good left-arm seamers from Pakistan and, of course, we also have some canny spinners as well, and these guys have grown up playing on flat pitches. So they have lots of tricks up their sleeves which does make for a good challenge for the batsmen.

"I get the impression that guys from Pakistan grow up on flat pitches without lateral movement so they have to have good slower balls and yorkers. In England, Australia and South Africa, you can use the pitch a bit more and get your variations that way. These guys have particularly good limited-overs skills which probably comes to them naturally due to the conditions they've grown up in."

Gurney - picked up by the Kolkata Knight Riders for the upcoming edition of the IPL for approximately USD $105,000 - is becoming well-versed in the global game.

"It's been a good few months for me as I had a good time in Australia with the Melbourne Renegades in the BBL and have then come here to the PSL in the UAE to get myself ready on subcontinental pitches," he said.

"That's not to say that I view PSL as a warm-up for IPL, not at all. The PSL is equally important to me. But it's nice that when I arrive in India, I'll have some overs under my belt on subcontinental pitches which would be useful," he added.

So how does the county-cricket scene in England and Wales compare?

"I think county cricket probably doesn't get the credit it deserves and I don't think it's quite as weak as people would think," said Gurney.

"I didn't go to the BBL and think it was a huge amount stronger than what we have in England. The franchise competitions such as PSL are interesting as from one year to the next, the team make-ups can be different, as can the conditions, but it's quite difficult to compare that with what you find in England.

"The fact is, that like anywhere else, we also get some great games of Twenty20 cricket in England as well as some which are not so good."

A fresh challenge awaits in 2020 when the ECB launches 'The Hundred' - complete with a player-draft system scheduled to take place in October - and Gurney says it is important the competition has time to bed in before people make a judgement on it.

"The natural reaction when you hear about it is, why are we changing things and tinkering with a successful formula?" he said.

"When the ECB launched the Twenty20 format in 2003, people were probably saying similar things. Let's see where we are in five-10 years' time with The Hundred before we make a firm judgement on its merits."

By the time this year's World Cup rolls around it will be four-and-a-half years since Gurney last played an ODI, but he is not completely discounting a comeback for England, no matter how stiff the competition for places.

"A return to England colours is not something I devote a huge amount of thought to at the moment, as my main priority is to play Twenty20 cricket around the world as much as possible and win as many trophies as I can," he said.

"My aim in playing PSL is that when I get a chance, I perform well so, that in future years, they'll have me back in one of the franchises. If performing well in franchise cricket around the world then leads to me putting on an England shirt again, that'd be a great bonus too."