In his latest article for SkySports, Saj explains why the increase in Pakistan Super League games to be played on home turf represents a key moment for the future of Pakistan cricket. 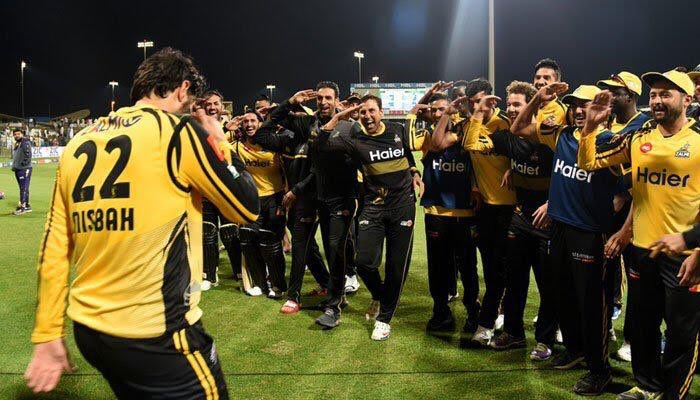 On a beautiful spring evening, a calm and collected Misbah-ul-Haq, took his Pakistan Super League side Peshawar Zalmi to victory with an undefeated 59 runs to his name.

In doing so, the 44-year-old former Pakistan captain also became the oldest player in history to score a half-century in the T20 format.

As the veteran campaigner raised his bat to acknowledge his achievement, he would have been slightly aggrieved to note that instead of many thousands of wildly cheering fans in the stands in Lahore, Peshawar or Karachi, he was greeted by a few hundred loyal spectators in the stands at the Shiekh Zayed Stadium in Abu Dhabi.

Similar lacklustre support had greeted Karachi Kings' Colin Ingram's brilliant PSL record-breaking innings of 127 not out in Sharjah earlier in the tournament. This and many other sparsely-attended games had clearly brought home the message that whilst the Pakistan Super League in UAE was initially a safer bet to entice foreign players to take part, it was failing miserably as a spectacle and in its service to Pakistan cricket.

To be completely fair to the people behind the inception of the Pakistan Super League, the primary objective of the tournament in 2016 was to establish the PSL in the international cricketing calendar and build an image of excellence in terms of standards of the competition. It therefore stood to reason that the majority, if not all, of the games would be played in the UAE to ensure that foreign players, the lifeblood of any such league, would build an affinity to the competition.

The first edition of the tournament, therefore, saw all of the matches being played in the UAE, whilst the following year the final of the tournament in an attempt to test the waters, was played in front of a jam-packed and vibrant Lahore crowd. The third edition saw three games in Lahore and the final being played at the historic National Stadium in Karachi. However, the current edition, will see a total of eight games being played in Karachi after a shift of venue from Lahore was forced due to the prevalent uncertainty in the region.

The significant increase in the number of games to be played in Pakistan in the 2019 edition of the Pakistan Super League, therefore, represents a major watershed moment in the history of the PSL and also represents a key moment for the future of Pakistan cricket.

Of course, the 'bringing cricket home' aspect of Pakistan's premier Twenty20 competition is a crucial one as has been witnessed by the frantic ticket sales in Karachi and the carnival-like atmosphere in Pakistan's most populous city. But, clearly, the administrators and the franchise owners also feel comfortable that the security situation in Pakistan has improved to the point that it no longer makes any business sense to not play the important final week of the tournament on home soil.

And so, the PSL action moves from the rather calmer surroundings of the UAE to a more frenetic one in Pakistan. The increase in the number of games to be played in Pakistan signals a significant move in the trend to restore top-level cricket in the country. Looking to the future, it is clear that a successful conclusion to the PSL in Pakistan will be presented to the world as further proof of the country's suitability once again as an international cricket destination.

To this end, the PCB have been at pains to invite David Richardson the Chief Executive of the ICC, as well as all representatives of the ICC's affiliated Boards to attend the final on March 17. Also, significantly, the PCB have asked security experts from Bangladesh and Australia to attend the final, as the Bangladesh Cricket Board and Cricket Australia are being looked at as potential tourists to Pakistan in the not-so-distant future. The obvious implication of these invitations is to ensure that a clear message is sent to the international cricket community about Pakistan's ability to host international teams and events in the major urban centres.

The PCB and the Karachi administration seems to have gone to great lengths to ensure that there is no room for any complacency when it comes to the security of the PSL teams. Whilst road closures and even extra security checks at the entry points to the city may seem excessive to some external observers and local residents, there is little appetite for any lapses which could send Pakistan cricket back into the abyss that they experienced in the wake of the tragic events of March 3, 2009.

Anyone visiting Karachi over the next few days could be forgiven for thinking that the city had been taken over by PSL fever. The billboards, cardboard cut-outs of players and the beautiful lights celebrating the arrival of cricket in town are just some examples of what the game of cricket means for the cricket-mad residents of Karachi and the nation as a whole. Karachi has been starved of top-class cricket, but now the fans and residents are ready to welcome some of the world's best players to their city with open arms.

The foreign stars from around the globe competing in the fourth edition of the Pakistan Super League have given the tournament and the nation a huge boost by agreeing wholeheartedly to travel to Pakistan. Progress can be measured quite simply by noting that Quetta Gladiators' stalwart Shane Watson who has previously declined to play in Pakistan has agreed to feature in Pakistan this time around.

When the victorious captain lifts the trophy on the evening of March 17 in Karachi, he will undoubtedly be met by thunderous applause as a nation starved of cricket on its own soil rises to applaud another significant milestone on the road to the revival of cricket. There have been many false dawns on this road to redemption for Pakistan cricket but one hopes that this time, it will be for real.