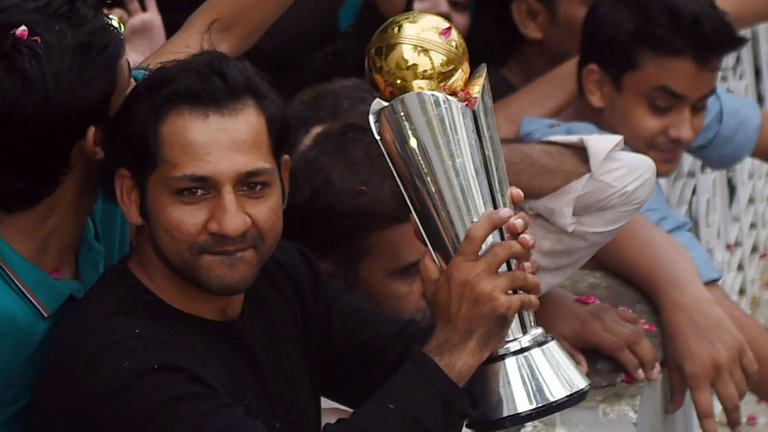 Pictures of a beaming Imran Khan with the 1992 World Cup trophy in his hands following victory over England at the MCG can still be found adorned on walls in the residences of many cricket-lovers in Pakistan.

The fact this achievement still resonates with Pakistani cricket followers more than 27 years later is a testament to how important the milestone was in the history of the cricket-mad nation.

If there was a chance Pakistanis would have moved on from the memories, it quickly disappeared with the election of Imran Khan as Prime Minister.

With the man who gave his nation the World Cup title in charge again, perhaps the stars are aligned perfectly for a memorable summer of joy for Pakistani supporters.

However, despite some optimism, the reality could be somewhat different to the dreams, even with Imran in place.

Pakistan have not been able to repeat the incredible performance of 1992 at a World Cup, but the unexpected and fairytale-like performance in the 2017 Champions Trophy in England has reawakened hopes of a magical victory this summer.

To many, such hopes are borne more out of wishful thinking than any concrete reasons. The reality is that Pakistan's recent ODI record and style of play has been woeful, as exemplified by their recent 5-0 loss to Australia in the UAE.

The series against Australia was designed to provide answers for the Pakistan think-tank as they looked to finalise their World Cup squad, but the manner of the capitulation created more questions for head coach Mickey Arthur and captain Sarfraz Ahmed.

An opportunity for Pakistan to test out their bench strength ended up in humiliation, leaving very little room for manoeuvre in terms of deciding on a team combination for challenges ahead.

Pakistan 'discovered' batsman Abid Ali and rookie pace-bowler Mohammad Hasnain during the series against Australia, but the masses were extremely unhappy with the manner of the five defeats, despite the Pakistan team management stating the series was purely to try out second-string players.

In happier times, the 17-man squad selected for the ODI series against England would have given a lot of hope to Pakistani supporters. Yet the current form of the side, which sees them languishing in sixth position in the ODI rankings, does not bode well for the World Cup.

The series against England will be an important one for Pakistan to acclimatise and finalise their World Cup squad, but there will be a lot of pressure and expectation on Sarfraz and his team-mates to get the tour off to a good start.

Like most modern-day ODI sides, the Pakistan batting will be heavily dependent on positive starts provided by their openers Fakhar Zaman and Imam-ul-Haq. While Fakhar's devil-may-care attitude to shot-making can provide thrills, the chances of him returning to the pavilion in a hurry are also very real. His century in the Champions Trophy final provided Pakistan with the platform that led to victory over India. He will once again be a vital component if they are to succeed.

With Haris Sohail, Babar Azam, Mohammad Hafeez and Shoaib Malik, the concern is that Pakistan's middle-order has the steady rather than spectacular look to it. Only time will tell if they have the capability for some much-needed batting fireworks, and Arthur has already stated that he expects better strike-rates from his batsmen than have been evident of late.

Sarfraz is a man with a lot on his plate. Keeping-wicket, captaining and then playing an important role with the bat will not be an easy task. However, if there is anyone who can take on this challenge and come out of it with his head held high, it is Sarfraz, as he showed emphatically two years ago.

Amongst the negativity surrounding Pakistan's chances in the ODI this summer, there are a few rays of hope.

One constant in Pakistan cricket over the years has been the production of young, match-winning fast-bowlers who are the envy of the cricketing world. In Shaheen Shah Afridi and Mohammad Hasnain, Pakistan have two teenage pace-bowlers who have the pace and ability to rattle any batting line-up, on any surface.

They are raw, they are young, they are untried in major tournaments, but they are the sort of cricketers who can change the course of a match in the space of a few deliveries.

In addition to the teenage tearaways, Pakistan have selected pace-bowlers Junaid Khan, Faheem Ashraf and Hasan Ali, all of whom were part of the Champions Trophy-winning squad. The spin-bowling department for Pakistan is very well-stocked, too - in Imad Wasim, Shadab Khan and Mohammad Hafeez, Pakistan have the guile, control and wicket-taking ability to trouble and control the batting of most opponents.

Shadab Khan has been replaced by Yasir Shah for the series against England, due to illness, but is expected to be fit for the World Cup and could be one of the stars of the tournament.

But the most talked-about aspect of Pakistan's World Cup squad has to be the exclusion of Mohammad Amir. In what may prove to be an inspired move, the selectors have effectively thrown down the gauntlet to Amir, asking him to show what he is capable of and show the desire he had at the start of his cricketing career.

Five wickets in 14 ODIs since the Champions Trophy final proves just what a struggle the 50-over format has been of late for Amir.

The onus is on Amir - if he does well against England by taking wickets and winning games for his side, his place in the final 15 for the World Cup is there for the taking. A below-average performance before the World Cup would see him making a lonely and uncomfortable journey back to Pakistan.

In true Pakistani-style, the squad for the England series and the World Cup has the capability to shine in English conditions. The bowling firepower has the ability and strength-in-depth to bowl out any opposition, but the key, as always, will be whether the batsmen can put enough runs on the board.

If the batting clicks, then a repeat of the Champions Trophy could be a realistic possibility. If the batting doesn't click, then even Pakistan's excellent bowling unit will struggle to lift the side to victory.