"We were pelted with rotten vegetables & stones after loss to India in 1996 World Cup" : Aaqib Javed

Aaqib Javed was one of the key figures in Pakistan bowling line-up from 1990 to 1998. He was part of the World Cup winning squad of 1992 and also played in the 1996 World Cup. Needless to say he knows a thing or two about playing in the cricket mega event and facing India in a high-adrenaline clash.

In an exclusive interview with Saj for Firstpost, just the before the epic India-Pakistan encounter on 16 June, the former Pakistan fast-bowler spoke about his own experiences of playing in the World Cup, the importance to world cricket of the upcoming iconic encounter between old foes India and Pakistan on Sunday, his advice for both sets of players as they prepare for the game and explained why Pakistan’s unpredictability could be the perfect foil for India’s overall superiority in batting and bowling. 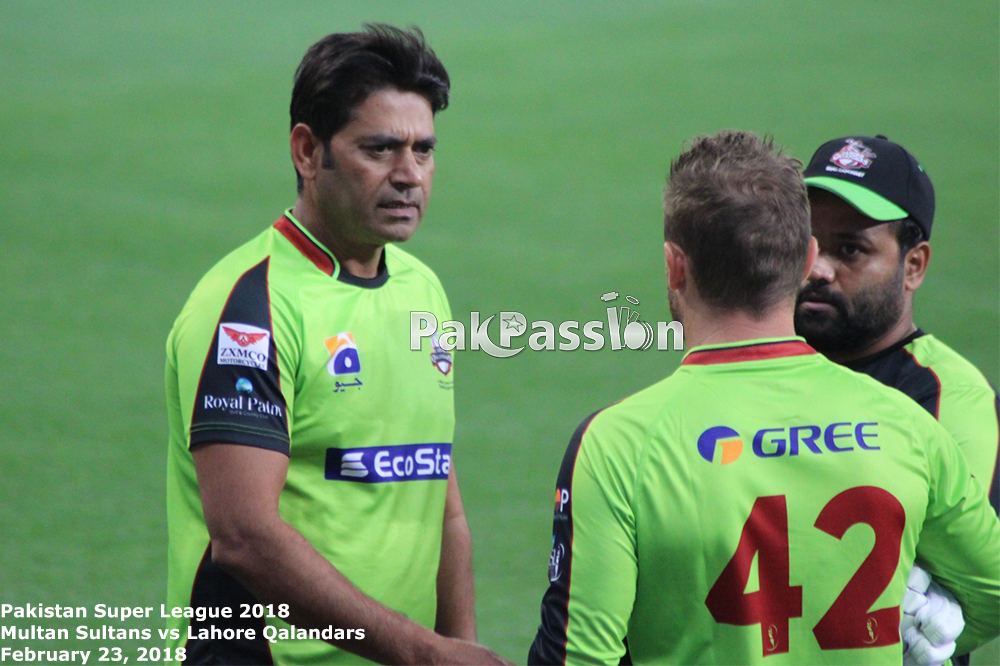 Firstpost (FP): Do you think it's possible for players to play such a game without any pressure?

Aaqib Javed (AJ): Look, it's easy to say that one should not take on extra pressure when playing an India-Pakistan game, but the fact is that this is something the players will have to face on the day of the match. This is why, in my experience, the temperament of the players is the key to success. As a player, the only way you will perform well in such games is when you play this game with a normal mindset and without fear of failure. Because, when one becomes too tense, then he cannot be expected to deliver the best performance in such high-profile games. But then, to expect players not to have a fear of failure in an India-Pakistan encounter is also asking too much. There are some players who are able to control this fear and are able to use their skills to the fullest but that does require some special character traits which are not common.


FP: How do the fans react to a loss suffered in a India-Pakistan match?

AJ: This is an emotional time for many fans and I still recall the time when we returned to Pakistan after losing in 1996 to India in the second quarter-final of the World Cup which was played in Bengaluru. On arrival, we were pelted with rotten vegetables, eggs and even stones and some of us received threats and couldn’t even step outside our homes for fear of safety for almost two months. In some cases, there were threats of players’ homes being burnt down so as a former player I can tell you that these games are very special. We all look forward to these encounters with eager anticipation but then players are also prepared to face the worse when things don’t go their way.


FP: What would be your advice be to players of both countries as they look ahead to the upcoming India-Pakistan World Cup encounter?

AJ: I would start by recommending Ian Chappell’s advice to both sets of players as they prepare for the upcoming high-profile game. He said something like your best chance of success happens when you go to sleep the night before and wake-up fresh in the morning without giving a thought to what game is to be played on that day. In today’s world, players would be well advised to not look at social media and go and watch a movie the night before to try and forget the challenge ahead.

FP: Sounds like good advice but how practical is it in today’s world and what is the best way to play such tense games?

AJ: Obviously, this is easier said than done and things are much more difficult for players in today’s world as opposed to the times when we used to play cricket. Nowadays, social media is flooded with hype about the upcoming game. On top of that, a player is being bombarded with messages on phones from friends and family encouraging you to do your best, so the player is unable to get a good night’s sleep as he is constantly thinking about this match. So, when they wake up, their mind is already filled with thoughts about the upcoming game and they are almost fifty percent mentally exhausted even before the first ball is bowled. Even the journey in the team bus is a tense one as is the team meeting before an India-Pakistan game. There is so much emotion that each player at the end of these meetings is wanting to do something extraordinary for his side.

Suddenly skills that matter take a backseat and all that is filled in the players heads are emotions and the focus is way off. The best way forward for both sets of players is to try and control their anxiety ahead of the game. When the match starts, try and not push too hard at the start of the game with cheering each other because that energy and motivation will be needed later when things are not going your way. In a match with so much excitement, my advice would be for players to slow it down and say less on the field and concentrate more on keeping themselves calm.


FP: How do you assess Pakistan’s chances in the ongoing World Cup?

AJ: We all know that Pakistan are capable of anything as we saw how they capitulated against a West Indies side in the first match but then defeated a much stronger England team in the next game. They once again played some mediocre cricket against Australia and lost that game. In my mind, Pakistan and West Indies are the only two sides in the world that can be so inconsistent. This is nothing to do with their skills but their mindset and this is how we grow up in Pakistan where we are a bit too relaxed at times and don’t really care about results that much. Same applies to the West Indies as well where if they win a game, they want to savour the moment and relax too much in the next game. But when the going gets tough and they know they have no choice but to succeed, they bounce back with great force.


FP: How do you rate India’s bowling resources compared to Pakistan’s in this World Cup?

AJ: To me, when comparing both sides, it's crucial to note that whichever side makes good use of the new ball will have a definite advantage. In English conditions, if you have new-ball bowlers who can swing and seam the ball, then you have a great opportunity of taking at least 2 wickets in the first ten overs. In that regard, India have extremely effective bowlers such as Jasprit Bumrah who I feel is amazing and is the best bowler in this World Cup. Then you have Bhuvneshwar Kumar who is an excellent swing and seam bowler and of course Mohammed Shami is also as good as any other bowler in the Indian line-up. Unfortunately, in contrast, Pakistan do not have a new ball specialist in their ranks. Although Mohammad Amir bowled really well against Australia, he only came to the fore later in the innings. Amongst the others, Shaheen Shah Afridi, Hasan Ali and even Wahab Riaz are not what I consider as new-ball bowlers.

Coming to the middle-overs, India are blessed with the likes of wrist spinners like Kuldeep Yadav and Yuzvendra Chahal whilst in Hardik Pandya they have an all-rounder who can make a difference. Sadly, after Abdul Razzaq, Pakistan are yet to produce a good quality seam-bowling all-rounder. This is a huge area of concern for Pakistan in all games and will matter a lot when they play against India as well.

In this tournament, Pakistan’s confidence looks shaken and the biggest example of that is that they are not comfortable playing their best leg-spinner Shadab Khan whom they dropped in the game against Australia. In contrast, India were so confident of their spinners that they played both Kuldeep Yadav and Yuzvendra Chahal in their crucial game against Australia. In terms of the comparison of spin resources between both sides, I would say that India are miles ahead.

FP: How would you compare both side’s batting line-ups ahead of the clash in Manchester?

AJ: When it comes to batting, the top 6 Indian batsmen are averaging close to 50 in ODIs and a side which boasts a batsman as accomplished as MS Dhoni coming into bat in the middle can only be classed as superior to all others. Shikhar Dhawan’s possible absence due to injury may slightly weaken the Indian side as he has been a consistent performer but overall their batting remains very strong and a huge challenge for Pakistan's bowlers.

In contrast, Pakistan’s top 3 batsmen are also very strong with good batting averages to show for themselves. Fakhar Zaman is a dangerous player and on his day is capable of big things but the problem with him is that he is inconsistent where he gets one big score after five to six innings. We then have Imam-ul-Haq who is a talented youngster, but very raw. In terms of comparison between the pairs of Shikhar Dhawan and Rohit Sharma versus Fakhar Zaman and Imam-ul-Haq, I am afraid there really is no way these pairings can be compared.

Whilst at the number 3 position, there is no real comparison between Virat Kohli for India and Babar Azam from Pakistan, I would say that Babar is improving steadily but really needs to do more. And then we have Mohammad Hafeez who has experience but after him there really is nothing to compare with the India batting line-up as putting Sarfaraz Ahmed in front of a vastly experienced MS Dhoni is a futile exercise.

It's obvious that there is no comparison possible between both sides in terms of experience and in terms of options available to each side. In such a situation, if Pakistan are to beat India, it will be through a special performance from one or two players. This could be something like an innings that Fakhar Zaman played in the Champions Trophy final or how Mohammad Amir took three top India wickets in the same game.


FP: Can Pakistan break India’s winning streak against them in the World Cup?

AJ: Look at South Africa who are ranked as one of the top teams of the world in all formats of the game, but curiously have never been able to win the World Cup. We also have examples of New Zealand and the current favourites England who are yet to win the trophy but have usually been top performers in all series leading up to the tournament. There is no explanation for it but somehow, they all seem to fail in the World Cup. Pakistan too have a similar issue when it comes to defeating India in a World Cup. Going back to my playing days, we used to regularly beat India in Sharjah but then somehow, we could never defeat them in the World Cup. However, this time around, there is hope from a Pakistan point of view. That hope is borne out of our brilliant victory against India in the Champions Trophy final. The current India World Cup side has many players who took part in that final so Pakistan can take hope and courage from the fact they beat a similar side in 2017. I feel that Pakistan have the ability to win against India in this World Cup, and they may well do it.