Writing for Sky Sports, Saj explains why it would be an error of judgement to write Pakistan off for what promises to be a fascinating tournament. 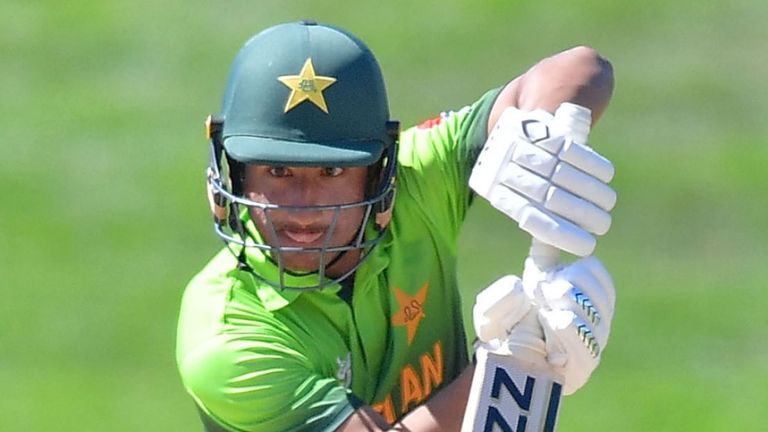 The much-maligned and often criticised Pakistan domestic cricket system has taken a lot of flak in recent times for what many believe is its inability to recognise and reward talent.

Detractors have also questioned whether enough is being done by the Pakistan Cricket Board to ensure that the talent-pool at junior levels is actually making its way to the top and subsequently to international cricket.

However, given the exploits of the likes of Babar Azam and more recently Shaheen Shah Afridi and Naseem Shah, who have represented the Pakistan U19 side with distinction, the PCB's critics can to a certain degree rest assured that the production line of talent is far from running dry.

Powered by self-belief and fuelled by some exceptional talent, Pakistan's young cricketers appear well prepared for the upcoming U19 World Cup in South Africa.

The current crop has a lot to look up to and emulate when it comes to Pakistan's record in the U19 World Cup. Pakistan have been runners-up three times and were back-to-back winners in 2004 and 2006, first beating the West Indies in the final by 25 runs in Dhaka, and then India by 38 runs in Colombo.

The 2006 victory remains a memorable one for Pakistani cricket followers, not only due to the fact that the opponents were arch-rivals India, but also due to the manner of the win, which was achieved after being bowled out for a paltry 109.

All seemed lost at the innings break, but a Sarfaraz Ahmed-lead side bowled out India for only 71 as Pakistan recorded a sensational win. If the current Pakistan U19 team needed inspiration, they can look no further than the 2006 scorecard and look at the pictures of the celebrations after that incredible win over India.

While past glory and achievements can be good indicators of a team's pedigree, the Pakistan youngsters of today know very well that expectations will be high back home and they will be up against some very tough competitors when their campaign eventually kicks off on January 19 against Scotland.

The training and preparation in Lahore at the National Cricket Academy has been intense with 11 hard-fought practice games being played among the squad and fringe players. Indeed, based upon comments from the former Pakistan batsman, Ijaz Ahmed, who is the current head coach, it would appear that this side has the fire-power and talent to go all the way and win the title for the third time.

The fact that teenage pace-bowler Naseem Shah, who recently made his Test debut in Australia at a reported age of 16 years and 279 days will not be featuring in the Pakistan line-up will have been met with sighs of relief by the opposition batsmen.

Shah also became the youngest fast bowler to pick up a five-wicket haul in Test cricket when he helped Pakistan to victory in the second Test against Sri Lanka in Karachi last month. However, understandably, the Pakistan team management feels that Shah should now focus on senior cricket rather than pursuing challenges at the U19 level, something that will have pleased many an opponent at the upcoming World Cup.

However, the relief of not having to face Shah could turn out to be temporary once batsmen come to note that the Pakistan U19 squad has some excellent fast bowlers who could well turn out to be among the stars of the tournament.

Pace bowling has always formed an important part of any Pakistan side's armoury and it's no different in the current U19 squad. Foremost amongst the speed-merchants is Amir Khan who, according to Ijaz, bowls at an average speed of around 86mph and has at times been clocked above 90mph. If the Pakistan head coach's words are taken at face-value, Amir could well make life very uncomfortable for batsmen on the bouncy South African pitches.

As well as Amir, Pakistan's fast-bowling resources will be well-served by Tahir Hussain and Mohammad Wasim Jnr, with all-rounder Abbas Afridi providing support to the strike-bowlers. The spin-bowling department, another forte of Pakistan teams of the past, is also well-served by the young talents of Amir Ali and highly-rated Arish Ali Khan, who will play a key role in Pakistan's campaign.

Pakistan's traditional bowling strength will be well-matched in the batting department by the presence of their wicket-keeper batsman and captain Rohail Nazir who, at the age of 18, has already chalked up plenty of domestic and U19 experience.

Alongside Rohail, Pakistan's batting hopes will centre largely around opening batsman Haider Ali, who has also impressed one and all with his U19 performances and who scored a hundred in the recently concluded final of the Quaid-e-Azam Trophy in Karachi.

Haider, in only seven first-class matches, has already hit two hundreds and three fifties, while he averages 43.60 with the bat in List A cricket. If Pakistan are to succeed in South Africa then a lot will depend on the form and contributions of Haider.

Pakistan teams of all ages have over the years made it their business to defy the odds and surprise observers. In Rohail Nazir as skipper and Haider Ali as the batting linchpin, they have two cricketers who could lift their team-mates to what would be a huge and much-needed boost for Pakistan cricket.

This Pakistan U19 squad has some exceptional talent and the potential is there to record a third title win at this level in South Africa.

While Pakistan may not be among the favourites, it would be an error of judgement to write them off for what promises to be a fascinating tournament.