"The experience of visiting Pakistan has been brilliant" : Alex Hales

England batsman spoke about his experience of visiting Pakistan, how impressed he is with the PSL 5 venues, working with Wasim Akram and Dean Jones and England's chances in the T20 World Cup. 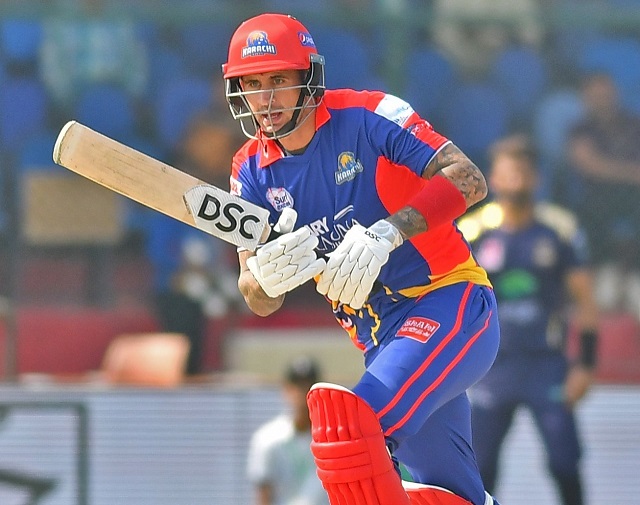 The Pakistan Super League’s unique role in revitalizing interest in Pakistan cricket has been a great success story. From the first edition of the tournament played in the UAE to a full-fledged domestic marvel in 2020 being played in front of packed houses in Karachi, Lahore, Multan, and Rawalpindi – the PSL has quickly become a fan-favorite.

Initial doubts about the viability of a tournament of such magnitude being held in Pakistan with foreign players in attendance soon evaporated into thin air as it was revealed last year that over 400 overseas players had expressed a desire to be included in the draft for PSL 5. It was clear that the PSL’s reputation as a well-organized and competitive Twenty20 League had a great impact upon the desire of many of the world’s top Twenty20 specialists to play alongside some of the most talented Pakistani players and their expectations were well rewarded when the tournament began this year on 20th February.

One of a contingent of 15 players from England plying their trade at the PSL in 2020, Alex Hales is no stranger to visiting Pakistan, but this year, as he explained in an exclusive interview with PakPassion.net, has been a much more interesting experience for him.

“The experience of visiting Pakistan has been brilliant and for that, I would like to offer a special vote of thanks to the guys at Karachi Kings who have made my stay very enjoyable and comfortable. We had an up and down tournament initially but have found our form in good time and hopefully, we can keep it up in the latter stages of the tournament.”

The tragic events of 2009 which resulted in the suspension of visits by international sides to Pakistan was a painful chapter for cricket in the country. More than ten years on from that fateful day and with adequate security measures in place, the PCB has achieved a major milestone by re-introducing top-level cricket in Pakistan which has drawn praise from Hales.

“It’s been a wonderful and safe experience in Pakistan and to be honest, I haven’t found the security overbearing at all during our stay here. I feel that the organizers have got it absolutely spot on and it’s the perfect combination of feeling safe and not being overbearing. Everything’s been brilliant and the hotels have been fantastic. Also, apart from the outstanding quality of cricket, the best thing about the PSL is the crowds who have come to see the games with many fixtures being sold out.”

The previous editions of the PSL had seen a limited number of games being played in Pakistan’s traditional cricket centers of Lahore and Karachi but in 2020 the tournament was brought home for the fans in Rawalpindi and Multan with some excellent results. In Multan alone, 80,000 people thronged the stadium in three games to watch the PSL stars in action. From a player’s point of view, there is nothing better than performing to the best of their abilities in front of a full-house filled with a passionate and appreciative audience, as Hales explained, “When I came to Pakistan last year, I just played two games in Karachi so now to get a chance to play in front of such amazing crowds in Lahore, Rawalpindi and Multan is absolutely brilliant for me. The atmosphere in these venues has been electric and second to none and with the standard of cricket being so good, I would say that the full package has been brilliant for me during this stint at the PSL.”

To have the opportunity to work with a legendary cricketer known to his fans as the Sultan of Swing and to have the counsel of one of PSL’s top Head Coaches is one that players clearly cherish to the maximum at Karachi Kings. The collective experience, according to Hales, that both Wasim Akram and Dean Jones bring to the table is second to none and the team environment for Karachi Kings is ample proof of that effect.

“Wasim Akram is a legend and I have had prior experience of working with him in the T10 League. I had a couple of games under Dean Jones when I played for Islamabad United last year so I know that both Wasim and Dean are very passionate about what they do and they certainly transfer that passion in the way we play our cricket and are creating a very relaxed environment at Karachi Kings which is great.”

As in previous years, the immense talent on display at this edition of the PSL is one that has fascinated all observers of the tournament. It’s no surprise that the abundance of skilled bowlers and batsmen which are stand-out features of the PSL have impressed Hales to no end. “The talent in Pakistan as shown in the PSL has been brilliant. In fact, every time you come to this tournament, there is always some new and emerging cricketer who has amazing talents and skills come through. This year, I have been impressed by Quetta Gladiators’ Azam Khan who played a good knock against us recently, and there is the young and very talented Umer Khan who did well last year for Karachi Kings and is continuing to do an excellent job this year too.“

So, what is it about the huge number of franchise-based Twenty20 Leagues that seems to capture the imagination of players in today’s cricket? Apart from the obvious financial rewards, there is a little more to the attraction of this style of cricket as Hales explains, “The lure of playing Twenty20 cricket is all about rubbing shoulders with some of the best players in the world. It’s really the way Twenty20 cricket is growing where you play with and against some top players and you get to make so many friends around the world. The competition is really tough in these leagues as you are playing in different conditions all the time against guys who know your game very well. You always have to look to improve if you wish to stay one step ahead of your competitors so I feel that it’s a very ruthless but very enjoyable circuit, and the Twenty20 world is something I have really enjoyed over the last two years or so.”

There is little doubt that the Twenty20 format is an entertainer’s dream and is very popular with crowds, the world over. However, many experts have felt that this style of cricket is having a detrimental effect on the technical abilities of players, especially if they wish to pursue a career in the longest form of the game. This is a point of view that Alex Hales disagrees with wholeheartedly.

“I am not too sure, to be honest about any effects on one’s ability to play Test matches if they play Twenty20 games. The skill-sets required in both formats, especially as a batter, are very different. I think as a young player, any chance you can get to play in different teams around the world with or against different players in varying conditions is actually gold dust. The more you can play with or against different players, the more your game will improve in the shorter or even the longer format of the game. Playing Twenty20 League cricket gives a young player a fantastic opportunity to get out there and meet other players, work under amazing coaches and in different conditions which is excellent for their development.”

Whilst tournaments like the PSL do provide England-based players with ample opportunities to utilize all parts of the year to play cricket, the county season in England always represents the highlight of the season. This year, however, there is an extra incentive with the advent of The Hundred tournament which Hales is looking forward to with eager anticipation.

“I always look forward to the county season but this time around it’s a bit more exciting as we have The Hundred tournament coming up. There is a lot of interest in this competition amongst players and it will be good to see how that will pan out. I have a few busy months of cricket coming up back in England and I am really looking forward to it.”

England’s fantastic triumph in the 2019 World Cup has been a culmination of some tough decisions and the discovery of some incredible talent. The World Champions are now perfectly placed to take on some of the toughest opponents in the Twenty20 format in the T20 World Cup later this year in Australia and as Hales explains, if their current form is any guide the T20 title is well within their reach, “England have a great chance of winning the T20 World Cup as the quality of their white-ball cricket is through the roof. There is some serious talent in the top-order and if they can carry that form of the 2019 World Cup into the T20 World Cup then I don’t see any reason why they can’t challenge the best sides in the world. Every team going into that tournament has their eyes on winning the tournament but if England play well, they have every chance of winning the T20 World Cup.”