"Mohammad Amir is still one of the world’s best white-ball bowlers" : Mickey Arthur

Former Pakistan and Karachi Kings coach discusses the upcoming PSL 6 season and why he feels the Karachi side have the firepower to retain their title. 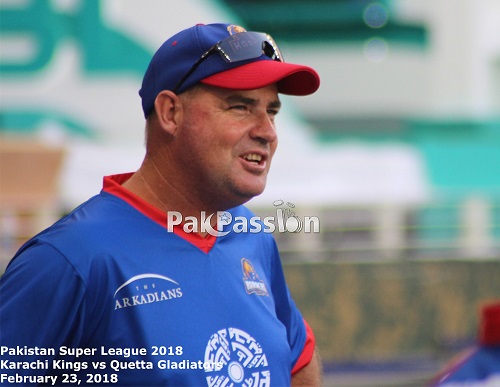 The customary build-up to the sixth edition of the Pakistan Super League’s (PSL) is well underway, with all six franchises finalizing their squads at the recent Player Draft. The 2021 offering of one of the cricket world’s top Twenty20 leagues is due to begin on 20th February in Karachi with the final scheduled to take place on 22nd March in Lahore.

Whilst Pakistan and Karachi Kings former Head Coach, Mickey Arthur, is currently busy with Sri Lanka’s home series against England, he has as expected been keeping a close eye on how the PSL squads are shaping up as he explained in an exclusive interview with PakPassion.net, “I’d be lying if I said I didn’t follow what was going on in the recent PSL draft as I do take a keen interest in this tournament. To me all the squads look very well balanced and I am sure we can all once again, look forward to a very competitive tournament this year.”

The 5th season of PSL, which was interrupted by the advent of the Coronavirus Pandemic and completed in November of last year, did produce some high-quality games which included a fall from grace of Islamabad United as they plunged to last position in the points table, as well as the resurgence of Lahore Qalandars who made it all the way to the final. This undoubtedly lends a more competitive edge to this year’s tournament and is an aspect that Mickey Arthur is very excited about, especially given the relative strengths of some of the squads.

“From what I have seen of the selected PSL squads, I do like the look of Lahore Qalandars as I feel they have a lot of strength, particularly from a bowling point of view with bowlers like Shaheen Shah Afridi, Haris Rauf and David Wiese in their attack. To be honest, all the teams look good though. I’ve got a special fondness for Islamabad seeing that they have Shadab Khan who to me has all the makings of an exceptional captain. In addition, getting Hassan Ali on their roster was also a good move for them and his presence could make a big difference this season.”

Previous editions of the PSL have always given rise to some exceptional young talents who have gone on to be beneficial to the national side. The likes of Shadab Khan, Shaheen Shah Afridi, Mohammad Hasnain and Musa Khan are just some of the names that have gone on to represent Pakistan after some excellent performances in the PSL. It is in this light that the former Pakistan Head Coach is perplexed by the fact that the likes of Abdullah Shafique who was recently selected for the national Twenty20 side ostensibly for his potential, has failed to find a home in any one of the six franchises for PSL 6.

“What was disappointing to see for me in this Player Draft was that guys like Abdullah Shafique were not picked up by any franchise. If you’re playing in the Pakistan national team as was Abdullah during the tour of New Zealand, one expects him to have been playing in the PSL, which to me is almost obligatory. This whole situation is fairly disappointing, as is probably for the players too.”

It is logical to assume that Arthur, who was appointed Head Coach of Karachi Kings for their debut season in 2016 and continued to hold that position until 2019 when he was replaced by the Late Dean Jones, has a vested interest in how the team he helped nurture has fared since his departure.

“I obviously follow Karachi Kings with a lot of interest because they’re my franchise. I really like the look of this squad and I feel that the inclusion of Dan Christian has really bolstered their all-round ability. I think it was Babar Azam who said it and it is something I totally agree with, which is that your overseas players will win you games, but it’s your local players that win you tournaments. It’s your core nucleus of local players that is the key in terms of picking teams and I am convinced that Karachi have the right mix of local and foreign players in their line-up.”

It would have been a marketing man’s dream to see a Karachi versus Lahore final in Pakistan’s premier T20 tournament and that is what transpired in November 2020. For Karachi, it was a 5 year wait to finally lift the PSL Trophy, but as their former Head Coach puts it, the Karachi franchise also has the firepower needed to continue their reign and retain the title in 2021.

“I am convinced that Karachi Kings have the ability to retain the title this year. In Babar Azam they’ve got one of the world’s best Twenty20 batsmen and I still think that they’ve got one of the world’s best white-ball bowlers in Mohammad Amir, and the same can be said about Imad Wasim who in my view is an incredible white-ball bowler. All in all, Karachi Kings are a very strong side and one that can once again, go all the way and lift the trophy in 2021.”