"There is an amazing mind-set among these bowlers" : Azhar Mahmood 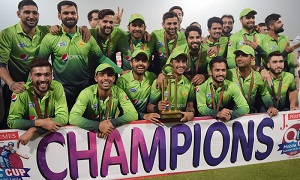 By Azhar Mahmood (7th November, 2017)
Disappointed at our loss in the Test series against Sri Lanka

Obviously, we were thoroughly disappointed by the loss of both Tests in the home series against Sri Lanka, but the fact of the matter is that we did not bowl well in both innings of the Tests. Again, this is not an attempt to look for excuses, but the guys were playing Tests after a long time as our last game had been in May of this year and that rustiness showed up against Sri Lanka.


Selection of Test bowling attack about choosing the best options

There has been some criticism of our decision to play one specialist spinner for the Test series, but in my view, this was the right decision. If you cast your mind back to the tour of the West Indies, we also played there with Yasir Shah in our team and that too on pitches which were very flat. On such surfaces our 3 seamers bowled really well and helped us win games. In the UAE, we did have two excellent spinners in the shape of Bilal Asif and Mohammad Asghar, but they were inexperienced which is why we did not pick them for the two games. Unfortunately, when I mentioned this to the media at that time, it was misconstrued to mean that both spinners were not good enough for this level of the game which was totally incorrect. On top of that, the pitch for the first Test in Abu Dhabi had a lot of grass on it, with the plan being to allow very little for the opposition spinners to work with. That type of pitch also suited our excellent pace attack. Where we actually lost the game was due to our batting which was really not up to the mark as we were unable to chase 136 in the final innings. I suppose the absence of the players of the calibre of Misbah-ul-Haq and Younis Khan was felt in this series but hopefully this will not be the case in the future.


Patience needed with the Test team

It is great news for Pakistan that the LOI teams that were finding it hard to win games and were being beaten by just about any team are now doing so well as we have seen from recent results. In contrast, the Test team which went to the top of the ICC rankings is now facing issues. Like I mentioned before, the departure of Misbah and Younis has had a negative effect on our middle-order and on top of that, some of our promising and senior players like Babar Azam, Azhar Ali and Asad Shafiq did not perform that well either. At this point, I would urge all of us to be patient with the youngsters as they try and establish themselves in Tests, as it takes a little time for them to find their feet in this format.

It’s not rocket-science to realize that in the modern-day LOI game, where boundaries are small, and bats are big, it is absolute madness to think that you can simply contain a top-quality opposition team by drying out runs. The only real way to stop runs from being scored against you is by taking wickets. In this regard, we are very blessed that we have a bunch of guys who are wicket-takers and are able to effectively execute the plans given to them and deliver on the field. There is an amazing mind-set among these bowlers that they need to get the batsmen out and not just worry about containing them, which is very important for the team as a whole. With this bowling line-up we are confident of taking wickets at every stage of the game regardless of how well the opposition is doing at that time. The proof of our recent progress is in the fact that in the last 9 ODI games, the most any team has scored against us is 236 which is a great sign for Pakistan cricket. On top of that, our bench-strength is improving rapidly with each back-up player who is called up performing really well when given the chance.

Having the amount of talent we have at our disposal has many benefits, apart from the obvious one of allowing us to beat top-class teams. It is because of that reason that we have been able to devote time to the likes of upcoming players like Faheem Ashraf and Usman Khan Shinwari to help them work on their bowling in the nets. The results of that work were visible as both Faheem’s and Shinwari’s line and length improved a lot during the T20Is recently. All our bowlers have the right skills but what I am teaching them is to know which skill to use against what type of batsman.

I also believe that we, as a bowling unit, are assessing the wickets much better than before. So basically, we have a better idea of what line to bowl and what variations to use on what type of wickets. What you see now is us bowling good yorkers with some excellent variations to back that up with. If we look at the example of Hasan Ali, you will see that he is bowling that special delivery with the ‘back of the hand’ with much more effectiveness after we worked on that type of ball. Similarly, Shinwari has improved his slower ball delivery and Mohammad Amir has also developed a newer slow ball as well. Of course, it is difficult to please all our fans, but I am sure they will also agree that we are making good and positive progress as far as our bowlers are concerned. I said this six months ago that we could change our fortunes with hard work and with God’s grace, we have done it and we are very proud of what we have achieved.


Faheem Ashraf is destined for greatness if he continues working hard

What a player Faheem has proved to be. When I first saw him in the emerging players camp, I knew that this guy had the potential to be the very best. He is a fantastic talent who has skills and has the desire to improve and work hard. I feel that cricket is all about confidence, and if given that confidence, Faheem has the potential to become an excellent all-rounder. I know that a lot of people complain about the lack of good all-rounders of the type of Abdul Razzaq or even myself but if the manner in which Faheem is progressing, people will soon forget about the past. Faheem is hard-working and gets his head down to the task and that is what he needs to continue doing in the future. He will always have our backing and encouragement and that message was conveyed to him and the results of that backing are there for all to see. His hat-trick in the 2nd T20I and the 2 sixes he hit in the last over of the final T20I against Sri Lanka are all examples of his skills which can only be good for Pakistan cricket.

The news of Shinwari’s injury that could potentially keep him out of cricket for a good few months has shocked us all. Before he came into the team this time, he had already suffered a similar injury before as well. Injuries to fast-bowlers are common occurrences and should not really be a surprise to anyone. Fast-bowlers from Australia and England also get injured, so this is not a Pakistani phenomenon as some people may think. Yes, we need to protect him from injuries as he is a future star for Pakistan, so we have tried to work hard on his fitness and ensure that the action does not put too much pressure on him. But preventing injuries is not an exact science and it is difficult as the stresses are different when practicing in the nets and when bowling in match situations.

What is strange about Shinwari’s injury is that a left-armer usually gets a front-side injury on the left of his body but this injury is the other way around. We will have to see how we can address this problem for him in the future. My intention is take our fast-bowlers to a bio-mechanics expert and analyse which muscles are getting what sort of load due to the bowler’s action. This way we can establish how to avoid injuries and get strength in the weaker areas of our fast-bowlers. Fast-bowling is a not an easy job as it requires repeating a strenuous exercise over and over again. You may see a bowler bowl a few overs in a match but what we don’t realize is that these bowlers bowl many overs in the nets almost every single day which is a tough ask for the human body.

From the videos we have recorded of Hafeez’s bowling action and from what our analyst can ascertain, his action looks very similar to before and there is no discernible change in his action. The final decision on his action, obviously, rests with the ICC and that will become clear when the result of his test are revealed soon. We wanted to check the action in detail when he was in Lahore at the LUMS biomechanics laboratory, but we ran out of time to do that. In the future, I intend to use this facility a little more to monitor our bowlers to prevent injuries and also to keep an eye on actions, so such issues can be avoided.

There have been some discussions regarding Mohammad Amir’s work-load and his subsequent injury problems. Unfortunately, in today’s cricket, apart from the stress on the body brought on by the games they play, players are also faced with pressure on their body due to travelling and lack of rest. Add to that the severe heat which we experienced in the UAE in the recent series - possibly the worst weather I have ever been exposed to, and you can understand the problems of fitness that can arise in such circumstances.

It’s difficult to explain the joy we all experienced when we played in Lahore recently. We all want international cricket to return to Pakistan and being part of the Pakistan team playing in Lahore was something special. We had full houses and the atmosphere in the games against the World XI and Sri Lanka was brilliant. For the audiences, the opportunity to watch their team play at their home ground must have been great, in fact for the youngsters to see their heroes perform in front of their eyes must have been an inspirational and a memorable experience. Of course, for the younger players in the squad, it must have been great to have felt what it means to play in front of home crowds and also to feel the adulation of their own people which will hold them in good stead in the future.
Discuss!