"Mohammad Amir should look to give up County cricket and T20 leagues instead of reducing international cricket" : Azhar Mahmood

In his latest exclusive blog for PakPassion.net, the Pakistan and Karachi Kings bowling coach Azhar Mahmood writes about his overall assessment of Karachi Kings performance at the Pakistan Super League, the inconsistent bowling effort by Usman Khan Shinwari, Mohammad Amir's intentions to play less Test cricket, the excitement of international cricket returning to Karachi and the ball-tampering scandal which has engulfed the world of cricket. 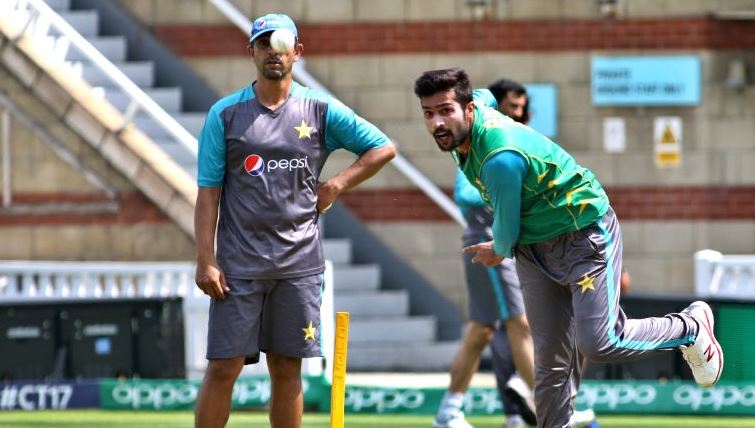 Disappointment about Karachi Kings inability to qualify for final in Karachi

Obviously, like all Karachi fans, I was disappointed by the fact that we could not reach the final of PSL 2018, especially as we appeared to be in a strong position after winning our first 3 games. We then had to share the points with Multan Sultans due to play being abandoned in Sharjah and then had to wait for the next game after a week-long break. As we all know, momentum is key in Twenty20 cricket and with this unusually long break, I felt that we lost that drive and our campaign suffered as a result. We were also a little unlucky with injuries to both Shahid Afridi and Imad Wasim. Apart from things we could not control, we also had a setback due to the super over finish against Lahore Qalandars where Usman Khan Shinwari bowled a no-ball at a critical point. In the final analysis, these are the issues which prevented us from qualifying for what would have been a memorable game for us in Karachi in the final.

Usman Khan Shinwari was making a comeback after an injury and he bowled well in the initial stages but unfortunately, at the crucial stage during the playoff in Dubai, he failed to perform well against Islamabad although to be fair, Luke Ronchi was in brilliant form that day. Along with Shinwari, Mohammad Amir also did not perform well in this year’s PSL despite having the potential to do much better than that. Now both bowlers need to put their heads down and work hard to get themselves back in form but unfortunately due to the fact that there will be a game every day in the upcoming T20I series against West Indies, there won’t be much time to fix issues. We would have liked more time between the three games as you cannot really do much meaningful technical work between the matches. So, if one of these bowlers has a technical problem such as with their wrist position then that cannot be worked upon in such a short period of time and especially when you have back-to-back games. All we can then do at this stage is to encourage, motivate and get the bowlers to back themselves so that they come back stronger.

Fast bowling standards at the PSL

I was really impressed by the quality of bowling on display in this year's PSL which was easily comparable to the best Twenty20 leagues of the world. Each of the franchises in PSL had a proper bowling line-up with no part-timers being employed as front-line bowlers. This can explain why several of the matches were so close where we had games that went to the last over and, in some cases, last ball finishes as well as super overs which added to the beauty of the tournament. Even Hasan Ali, who was coming back after a lay-off due to injury bowled really well towards the end of the tournament. Shaheen Shah Afridi was brilliant as was Wahab Riaz and then, Rahat Ali who is usually considered as a Test bowler also showed that he can play this format of the game. Coming back to Wahab, let me say that he was brilliant throughout the tournament in the way he bowled up-front and at the back of the innings as well and most importantly only bowled a few no-balls during the tournament. That particular fact was a very positive thing and pleasing for me as the Pakistan bowling coach as that is one aspect of the game we have worked on a lot with Wahab. I hope he keeps on working on his bowling and improving and if he does he will be back to his best soon.

The brilliance of Shaheen Shah Afridi at the PSL

I am very excited about working with Shaheen Shah Afridi in the coming series and in the future. He is only 17 years old, but he has tremendous potential in my opinion. What he needs to do to maximise his potential is to work hard on his fitness and skills. He is part of the squad that will play against the West Indies so hopefully we shall see him at close quarters and work with him to see if he can help him move up to the next level. The wonderful thing about him is that he is young, he can bowl at 140Kph and he can bowl reverse swing. He will need to work on his new ball skills and also to bring more variation into his bowling which will make him into a complete package.

In addition, we saw Umaid Asif bowling so well for Peshawar Zalmi as did Hussain Talat and Amad Butt who bowled with good pace as well. Mohammad Sami at his age was also bowling with good pace which was again very pleasing. Like I said, each team had proper bowling line-ups and they each had some excellent performers within their squads.

Rahat Ali defied his critics in the PSL

One bowler that really surprised many at the PSL was Rahat Ali. We all saw how well he bowled with the new ball at the start of the innings and then came back towards the end of the innings where he bowled yorkers and other variations with a lot of success. He also bowled with good pace and more importantly, with a lot of control. His performances in the PSL were surely food for thought for those who consider him a Test specialist only.

Bowling resources looking good ahead of the 2019 World Cup

These are good signs for us as we are about a year-and-a-half away from the World Cup in England. Based on what we have seen in the PSL, we are now in a position to discuss with the selection committee to see who the best choices are amongst these bowlers for Tests, ODIs and T20Is. This would help us rotate the personnel between games more effectively as well. So, the plan now is that after the end of the West Indies series, the team management will sit together with the selectors to discuss how best to look after the workload of the bowlers and plan ahead for the World Cup.

Mickey Arthur and I have spoken about the recent remarks by Mohammad Amir about playing less cricket and we can sympathise with him on the issue as he came back to playing cricket after 5 years and was thrust into the limelight. Also he had to play almost all the games in all formats for Pakistan since his return. In between, he has also played County cricket as well as other Twenty20 leagues. My advice to Amir, if he wishes to give himself a break from back-to-back cricket is to not play County or Twenty20 league cricket and instead concentrate on playing international cricket in all formats. This is simply because he is young, he has potential and if he looks after himself, he can go a long way without a doubt. Amir now has to make the final decision on this but as the team management, we will speak to him and guide him to come to a conclusion which is best for him and is in the best interests of Pakistan cricket.

Excited about return of international cricket in Karachi

It was an absolute pleasure to recently watch a high-quality game of cricket being played in Karachi after a period of 9 years. I have fond memories of the National Stadium where I have played games in the past. The Karachi crowds are amazing and they, like all of Pakistan, want to see international cricket being played in their city. We had international games being played in Lahore last year and it is wonderful that international cricket is also returning to Karachi very soon with the upcoming T20I series against the West Indies. It will be a short series but what I would like to see is a great set of games which will allow us to give a bit more to the people of Karachi. What it also means is that another venue for playing international cricket would have been restored in Pakistan which will mean that more matches can take place in future. These are all good signs for Pakistan cricket. As I have said before, cricket in Pakistan will only become stronger when our people see their heroes playing against international teams at their own home grounds.

It's obviously a sad time for international cricket and is very disappointing for me as a former cricketer that this ball-tampering issue has come to light and it is something which none of us would like to see happening in cricket. We have now seen the sanctions imposed on the three players which is the right decision and a brave one from Cricket Australia. Without going into details of the other such incidents that have taken place before, let me say that when you are under pressure on a cricket field, your mind does get cloudy and the 3 players took some bad decisions. They even lost that Test match as well which also made them the target of ridicule which, to me, is not right. The 12-month suspensions for Steve Smith and David Warner and the 9-month suspension for Cameron Bancroft by CA have been imposed to set an example to deter others from doing the same. The Australian players are treated as heroes and role-models and so the actions by CA have been taken to ensure that this does not happen again. What is important here is that CA have shown to the world that no one, and absolutely no one, is bigger than the game itself and this is probably a lesson that many others can pay heed to as well.