"Multan Sultans should be awarded PSL title based upon their position in the points table" : Azhar Mahmood

In his latest blog for PakPassion.net, the Multan Sultans bowling coach Azhar Mahmood writes about his experience in this year’s Pakistan Super League, why he is impressed by the performances of Multan Sultan's young players, Rohail Nazir’s bright future, his impressions of working with Andy Flower and how Naseem Shah can stay injury-free with more game time. 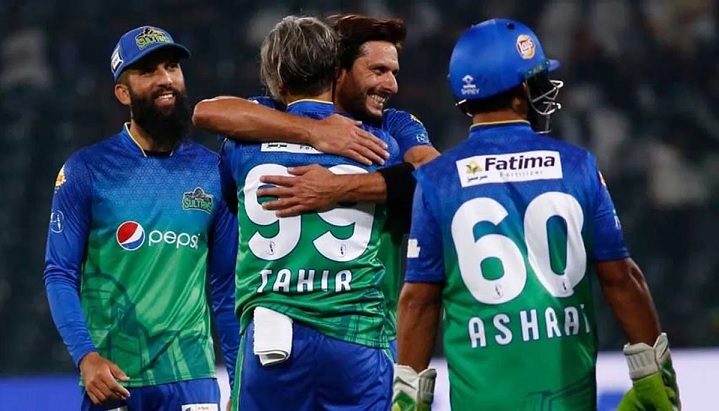 Let me start by saying that all of us at Multan Sultans are extremely satisfied with how the side performed in the PSL, especially as we finished on top of the points table which is something all teams desire. Apart from our performances, the fact that such a high-quality tournament was played in Pakistan was great news for all of us. It was great to see full-houses in Multan and Rawalpindi and the atmosphere was absolutely brilliant, especially in our home ground. It was an incredible sight to see enthusiastic fans lining the streets as we travelled to the ground and back and let me tell you, I have only seen that before in India when I played for KKR in the IPL, and never before in Pakistan.

When our squad was created for PSL 5, there were many people who did not think that this side had the capacity to go to the top of the table and would end up in a similar position as last year. But if you look at the composition of our squad, we had the right blend of youth and experience. We also had an excellent coaching team headed by Andy Flower and supported by the likes of Mushtaq Ahmed, Abdur Rehman and myself. Shan Masood was an excellent choice as our captain and lead from the front throughout the tournament. But, huge credit goes to players like Shahid Afridi, Imran Tahir, Sohail Tanvir, Mohammad Irfan who performed really well and Junaid Khan was excellent as and when he was given a game. Whilst the experienced players chipped-in as expected, for me the most satisfying and encouraging part was the manner in which the youngsters came to the table. So, players, like Khushdil Shah who batted so well and of course Zeeshan Ashraf who apart from opening the innings also kept wicket superbly. Then you had our inexperienced bowlers in the shape of Mohammad Ilyas and Ali Shafiq who were brilliant in the tournament. Specifically, Ali Shafiq bowled beautifully in the 18th over and then defended 15 runs in the last over against Peshawar Zalmi which was really impressive. And what can one say about Lala? He batted beautifully in our rain abandoned game against Karachi Kings and brought us back into the match which seemed to be slipping away. And not just batting, Shahid Afridi showed his class overall in his bowling as well. But regardless of how well Multan did in this tournament, for me the fact that PSL was played entirely in Pakistan was a matter of great joy and augurs well for the future of cricket in our country.

We were certainly blessed with the presence of one of the brightest prospects in Pakistan cricket, Rohail Nazir. Unfortunately, he featured in just two games for us, but this was due to the manner in which we constructed our team combinations and no other reason. We had to ask Zeeshan Ashraf to take on the wicket-keeping role which did not allow a place for Rohail in the side. But once we had qualified for the final stages, we decided to have a look at how Rohail could come to the party and let me say that he showed great skills and improvisations in the two games he played for us. In particular that shot against Shaheen Shah Afridi who was bowling well above 140 KpH was simply brilliant. He also showed us that he can bat up the order with ease, and also at the number seven position if needed. His progress is for sure a great sign for our cricket.

The idea to use data for our selection decisions was something that Ali and Alamgir Tareen have always insisted on and it’s an idea we used for our player draft as well. Whilst everyone uses data, our usage was different because of the depth of detail in the information we used. What this allowed us to do was to get rid of any idea of bias when choosing the squad or selecting teams for our games. What we as coaches were tasked to do was to use that data in the correct way and make strategies that are then executed by our players.


Andy Flower is one of the best coaches in the game

In my mind, Andy Flower is one of the best coaches in the game at the moment and I really enjoyed working with him during the PSL. The beauty of having Andy in our setup was that it was a great opportunity for me to learn from him. I found him not rigid but very flexible in his ideas and he was someone who always respected your opinion. He would listen attentively to what you have to say about an issue and ask you specific questions to ensure he understands the merits of what you are suggesting. He would then explain his decision which would be based upon careful consideration of all points raised. It was never the case that just because someone as experienced like Mushtaq Ahmed had suggested something, Andy would accept that advice straight away. Instead Andy would analyse that opinion and ask all pertinent questions before making his decision and then explain in detail why he had taken that decision. In fact, the whole Multan Sultan’s coaching team was a pleasure to work with and really made this season of the PSL most enjoyable for all of us.

Whilst it was unfortunate that the PSL was postponed due to circumstances beyond anyone’s control but I am in agreement with Shahid Afridi regarding his idea of awarding the title to the table-toppers, namely Multan Sultans. The fact is that each of the sides had played 10 games at the time when the tournament was stopped. Given that all teams had played equal games and no further matches were possible, Afridi’s suggestion makes a lot of sense. It’s a fair call in my view as Multan Sultans were far ahead of the other sides at 14 points and if the PSL is not able to resume then handing the title to us would be the right thing to do. This would be same as in the case where semi-final or final games are washed out due to rain, in such cases the team with the highest points would be declared winners.


PCB made the decision to postpone PSL at the right time

As always, hindsight is 20/20 and those criticising the PCB for waiting too long to postpone the tournament are being unfair. There were a few cases of Coronavirus in Pakistan initially and the PCB took this decision at the right time. They first stopped crowds from attending the games and then as further information became available and with the advice from Punjab and Sindh governments took the decision to postpone the tournament. To their immense credit, PCB acted immediately to get all involved in the tournament tested; thankfully all tests have come back negative which is a huge relief for all of us. To be honest, PSL was pretty much the only sports event in progress around the world so it was a sensible and well-timed decision by the PCB.

I have seen Shaheen Shah Afridi’s progress at close quarters from the time he became part of the Pakistan setup. I have always said that to me, he is one of the best young fast-bowlers Pakistan has at the moment. And I am glad that my view has not been proven wrong based upon the way he is currently bowling. I feel that he is a special bowler, but we need to take care of him and more importantly, he needs to look after himself too. In fact, I feel that all our bowlers like Mohammad Hasnain, Naseem Shah, Hassan Ali, Faheem Ashraf and Wahab Riaz – all performed exceptionally well at this year’s PSL and all can continue to serve Pakistan in the future. And it’s not just the bowlers who impressed me. Haider Ali was brilliant in the way he played and in him I see a player who has all the attributes of a batsman who is well suited for the modern-day game. I have already mentioned Khushdil Shah for his batting brilliance but Azam Khan was another batsman who stood out amongst the young players based upon some excellent innings he played for Quetta Gladiators. Whilst it’s tempting and almost fashionable to dismiss PSL performances as irrelevant but the fact is that with the T20 World Cup not too far away, these players have what it takes to be considered for selection for Pakistan.

It is a well-known fact that younger bowlers are prone to injuries and this is not something that Naseem Shah is prone to specifically. We saw that in the earlier days of their careers, even Wasim Akram and Waqar Younis suffered injuries. This is because the body of a young bowler is still getting used to the workload, so chances of sustaining injuries is higher. Naseem Shah has already had injuries as we saw on the Australia tour and also recently in PSL as well. It’s not always going to be easy for a bowler like Naseem as he bowls around 145KpH. He will need to be looked after by the PCB and attention needs to be given to his fitness as well. His action does make him a candidate for injury, but I am confident that Waqar Younis as bowling coach of Pakistan and his coaching colleagues will take care of these issues for Naseem. Regardless of this, it’s when Naseem Shah plays more cricket and his body gets used to stresses is when he will become less prone to injury. This is similar to how Shaheen Shah Afridi has progressed, and this is how I expect Naseem to develop in the future as he plays more cricket.