"Ignoring Imran Khan from PCB’s video tribute for the 1992 World Cup was a sad example of petty politics" : Aamir Sohail

Writing in his exclusive blog for PakPassion.net, Aamir Sohail retraces the steps of Pakistan's victorious World Cup campaign in 1992, explains why the team owes a lot to Imran Khan and Javed Miandad for their contributions to the ultimate victory, expresses his views on PCB's decision to ignore Imran Khan from the commemorative video tribute for the 1992 World Cup winners and examines what he believes is the PCB's inept handling of the PSL spot-fixing affair. 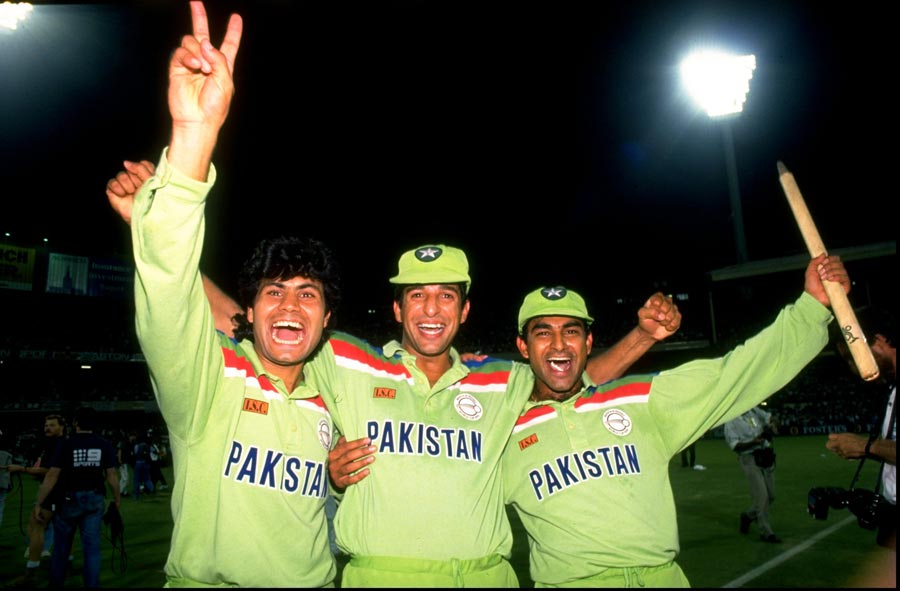 The twenty-fifth anniversary of our 1992 World Cup victory has come and gone but to tell you the truth it remains as fresh in our minds like it happened yesterday. To be honest, we had a slow start to the tournament, primarily because we were simply unable to build that perfect combination which could challenge our rivals. We were desperate to come up with the right combination so we tried different openers and experimented with players but nothing was working. I feel that it was only after that very close game against South Africa which we unfortunately lost due to rain that we started to feel that we had something going our way. The subsequent games all went our way with Ramiz Raja making a good comeback against New Zealand as an opener and we got the feeling that our situation was improving. The whole aspect of our roles and batting order was taking shape and the confidence was returning. In fact, the victory in the final group game against New Zealand was the point at which we felt that we were on our way to the finals.

But I have to admit that there was a lot of negativity around us and the criticism against us was coming through from all sides but we were determined to move on ahead towards our ultimate goal. We were focused towards winning this tournament and that is what propelled us forward. We put all such negative thoughts aside and the determination to win paved the way for our victory in the final.

The debt of gratitude for Imran Khan and Javed Miandad

It’s said that the captain’s role is crucial in guiding any team and in that regard, what Imran did for the team in that World Cup victory is a prime example of this. He kept egging us on through tough times in that tournament. He insisted that we not lose hope and gave us confidence and supported even those players who were struggling to perform. The result of that attitude from the captain was that when the crunch time came, all of the players he had backed delivered for him and Pakistan without fail. Whilst Imran’s role in gelling the team into this fine unit was brilliant, one cannot overlook what Javed Miandad did for the team as well. He carried the batting during some very tough situations and held the innings together whilst helping others around him to bat well. He was so thorough that before the games, he would tell each of us what was expected from us as the innings progressed, and also told us about which bowlers could be taken-on, which was simply brilliant. He was a great influence on the team and definitely one of the main architects of our victories.

The incredible feeling of victory as we lifted the Cup

To say that we were excited on the evening of the final would be an understatement but regardless of those feelings, we were far from being overawed by the occasion. We were definitely enjoying the atmosphere and the ambiance of the MCG which due to the traditional Australian-English rivalry was overwhelmingly vocal in our support. Our brand of cricket also had a lot of fans in Australia and we had quite a few Pakistanis cheering for us that day as well. And what can one say about feelings when the final England wicket fell? For a start, we fell to our knees to thank the Almighty and then we literally had to pinch each other to remind ourselves that this was indeed reality. We had to convince ourselves that his was not a dream and that we really were the World Champions. If the feeling at this point is difficult to describe then the joy and pride we felt when we lifted the trophy was simply incredible as well.

Too much made of Imran Khan’s victory speech

In times of such high emotions where we all felt overwhelmed by the occasion, it is perfectly understandable that Imran or anyone else for that matter would not have come prepared with a speech. No one in that frame of mind would be able to plan what they would say after winning such a great victory. Imran Khan’s focus was on establishing a hospital to treat cancer in Pakistan and he probably forgot to thank everyone in that moment. To be honest, none of us really thought about this as we were delirious after the win and frankly no one was in any shape to put serious thought at that point in time. However, since then, Imran has more than compensated for that minor lapse where he at numerous times has appreciated and thanked his team for working together to achieve the goal of becoming World Champions in 1992.

One can only describe not including Imran Khan’s message for the commemorative video by the PCB as a crude example of petty politics. We all know about the political affiliations of the top brass of the country’s cricket administrators so this wasn’t that big a surprise. What they have demonstrated is their narrow-mindedness and nothing more. But they have to realise that nothing they can do can take away the honour from Imran Khan or Javed Miandad or even Aamir Sohail. We were all part of that team that won the trophy. They need to understand that history cannot be changed and it is the PCB that will come out of this looking shallow in their outlook from this episode.

The whole spot-fixing saga has left the nation cold, especially as we thought we had gone past this stage after the events of 2010. What is most annoying is the way this is now being handled and that we were told by the PCB they had incontrovertible evidence against the accused players. So, if the evidence is so solid then what is the need for this Tribunal circus? Why not punish the guilty players based upon this proof and if they don’t agree, they can appeal against it in whichever forum they like. Simply issue players with Show Cause notices about these allegations and then give them time to explain or take whatever the punishment is prescribed in such cases. The Tribunal is just a poor and confusing way to deal with this as is the whole idea of threatening some players where those accused in the Justice Qayyum report have been allowed to walk away and some have been re-inducted after expiry of their bans. There seems to be no coherent policy to deal with this situation and the manner in which past cases have been dealt with has put the PCB on a slippery slope.