"PCB can learn from Cricket Australia's handling of the ball-tampering scandal" : Aamir Sohail

Writing in his exclusive blog for PakPassion.net, the former Pakistan captain Aamir Sohail expresses his views on the recent ball-tampering scandal, the lessons PCB can learn from Cricket Australia's handling of the crisis, the perils caused by the unusual glorification of the PSL and why PSL performances should not be used as the sole criteria for selection of Pakistan players. 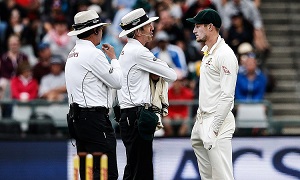 There is no doubt that the current ball-tampering scandal has lead to some concerns about the future of the game, but the real question is whether the emphasis on this matter is overblown as I feel that we should be concentrating on improvements to the game, and not on the negative aspects of the game. What the powers that be need to work upon is to think about what is good for the game and how it can be improved. Let’s stop worrying and wasting our time about trivial matters otherwise the game will not progress. When we devote our energies towards the right goals, then these matters will become secondary and issues such as this will probably not happen. I feel that this is the reason why our great game of cricket gets hit by such unwelcome incidents. Put simply, when we have tainted players from the past days involved in decision making for the game in various capacities, what sort of a message are we sending to the future generations? All the current fuss about ball-tampering is simply a result of this type of attitude and there seems to be a culture of impunity which is now resulting in the recurrence of such scandals in different forms.

The punishments given, and the public humiliation suffered by Steven Smith, David Warner and Cameron Bancroft in my view are more a reflection of the disgust and disappointment that the Australian nation felt rather than how Cricket Australia handled the situation. When one represents one’s country, it is a huge responsibility. You are simply not playing cricket, but you are custodians of your country’s image being presented to the world. The Australians felt embarrassed about the fact that the actions of a few had brought shame to the nation and they acted to put that right by imposing such sanctions. Contrast that attitude with what has happened when such issues have been uncovered in Pakistan. It's sad to note but the fact is that we are used to such issues and our reactions are proof of that. We have a very lenient attitude to such problems and have shown no resolve in handling these problems head-on. If we had put our foot down on numerous occasions in the past, then the embarrassing and damaging scandals that hurt us so much would not have re-occurred and I suppose this is a big lesson for us to learn from the current ball-tampering issue. The PCB can learn from Cricket Australia's handling of the ball-tampering scandal.


PSL should only be regarded as a good addition to Pakistan’s domestic cricket, and no more

I view the Pakistan Super League as nothing more than a very good addition to Pakistan’s domestic calendar. And as it is part of Pakistan’s domestic cricket, it should only take place in Pakistan and nowhere else. The issue we have is that whilst our security services and the armed forces are providing full support for PSL matches to be played in Pakistan, we also have foreign players publicly refusing to come to the country on the basis of fears of personal security. When that happens, it sends a confusing message to the rest of the world. It is a major setback and its seems to be a case of one step forward and four steps back for Pakistan cricket. For the last 4 years we have been listening to claims that international cricket is being revived in Pakistan, but we see that the visiting West Indies squad is without some of their top players. They have refused to visit Pakistan, ostensibly for reasons other than security and we are now back to square one in that regard. If reports are to be believed, the West Indies cricketers who have managed to come to Pakistan have been offered close to $US 25,000 as extra money which once again makes for poor marketing sense for Pakistan as a safe destination for cricket.

It appears to me that the performances in PSL are being used to judge and therefore select players for the Pakistan national team. Even one good performance at the PSL is being touted as reason enough to represent Pakistan which does not make sense. There seems to be a case being built in favour of the PSL as a dependable provider for cricketers for the Pakistan team. We now have a situation where the top performers in Pakistan first-class cricket are not even being asked to come into the PSL draft process so how can such a player ever play for Pakistan? As an example, consider Mohammad Saad from WAPDA with 9 first-class hundreds to his name who did not feature in the PSL. What sort of a message are we giving to a player like him? How can he ever get a chance to represent Pakistan? The PSL is a good addition for our domestic game but it should not be considered the be-all and end-all of Pakistan cricket which is somehow the impression being given out by the PCB. This kind of an attitude carries with it a huge peril. What we are saying to the young and upcoming cricketers is that as long as you can hit a few fours and sixes and be a slogger then you can play for Pakistan. As is we are suffering from a shortage of quality batmen and this approach will certainly not help that cause. On top of that, the representatives of the domestic cricket associations who are the providers of the raw material for the PSL, are not even invited to PSL which is incredible and not the way forward if we wish to improve our cricket.

We are being told that the PSL is where we are discovering and nurturing talent. If that is the case then can someone please explain, why was one of our most exciting talents, Fakhar Zaman moved around in the batting line-up for Lahore Qalandars? He is an opener who was moved up and down the order. Similarly, Umar Akmal was subjected to so much uncertainty in his batting position that one is compelled to ask if whether the purpose of the PSL is to move Pakistan cricket forward or backward?


Why waste a PSL slot on Kamran Akmal if he is not to play for Pakistan?

Kamran Akmal had an excellent PSL 2018 and ended up with lots of runs for the runners-up, Peshawar Zalmi. Despite that he was ignored for selection for the Pakistan squad for the series against West Indies, which begs an obvious question, why waste a PSL slot on Kamran Akmal if he is not to play for Pakistan? It would have been much more logical to give someone else a chance to play in the PSL rather than select Kamran Akmal and then ignore him for selection in the Pakistan squad despite his good performances.

There was a lot of talk about exciting new talent coming out of the PSL and Hussain Talat’s name has been mentioned a few times. He is a decent player, but he is one who is yet to score even one first-class hundred. If the selectors would like to play him as a batsman in the national team, then I do wish him luck, but this is the wrong precedent being set. We are continuing to ignore our best batsmen in domestic cricket and breaking their hearts. Instead we are saying that if you can play this 'get-quick' runs type innings in a Twenty20 game in the PSL then you have a bright future ahead of you with the Pakistan team. Forget about technique or textbook batting but all you need to do is to hit some fours and sixes in the shortest period of time and you are on your way as an international player. If the selectors are convinced that Hussain Talat or Asif Ali type of batsmen will win Pakistan 5 out of 10 matches then I suppose there is a case for selecting such batsmen for the national team. But let me tell you from what we have seen, such batsmen in the recent past have been very rare and all we have seen are batsmen who can play well in one or two games and then flop for the rest of the time. We have played many such players in our team before and I do wish him luck. I recall a player by the name of Bismillah Khan who seemed to be setting the world on fire for Quetta Gladiators in 2016 and was termed the find of the tournament at that time but he is nowhere to be seen now.

I was impressed by Shaheen Shah Afridi’s bowling as he bowled really well during the PSL and has shown his talent even before this tournament. He is 17 and I feel that with bowlers, you can push them into international cricket at a young age without too much of a risk, as long as you are happy with their talent. The only note of caution I would like to sound for all concerned is that we need to make sure that Shaheen Shah’s bone structure is mature enough to absorb the pressure of international cricket without causing injuries. We have seen that players like Usman Shinwari and others have been played early but ended up with injuries or have become unfit so we need to be careful in that regard.


No fitness tests before selection for Pakistan T20I squad?

Whilst we are on the subject of fitness, I was under the impression that no players would be selected for the national squad without fitness tests. If that is the case, what fitness tests were conducted before the announcement of the Pakistan squad for the series against the West Indies? We cannot have such double standards and more importantly, we need to know if after playing such an intense tournament as PSL, our boys are still fit or not and if there is a possibility that they may break down during the series.