The Pakistan Under-19s leg-spinner speaks to PakPassion about his introduction to cricket, his career to date and hopes for the future. 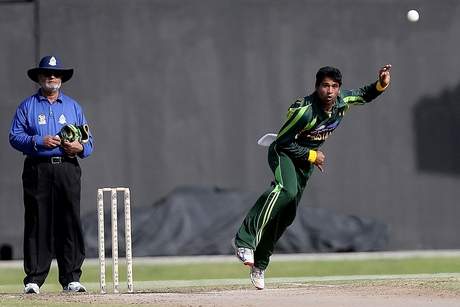 I’ve always had a keen interest in cricket for as long as I can remember. Nobody in my family played cricket at a professional level but it seemed like cricket was always on the television in our house, or as a family we’d be discussing Pakistan’s latest performance or watching videos of old matches. Cricket was very much part and parcel of my growing up and almost as soon as I could walk I had a bat and ball in my hand.

I always wanted to be a fast bowler. In fact at school I fancied myself as a pace bowler. I had the long run up and thought I could be the next Waqar Younis. However I was also a big fan of Shahid Afridi, he was my hero and the main reason I became a leg spinner. I think given my height (5 foot 6”) I made the right decision as there aren’t too many quick bowlers this size.

My coaches at P&T Gymkhana club in Lahore have really put in a lot of effort with me since I started playing cricket there. I’d particularly like to mention Kamran Khan who has day in, day out worked very hard with me alongside all of the other very hard working coaches there. In addition the world famous umpire Aleem Dar who also plays at P&T from time to time has really helped me and guided me and I will always be grateful for his time and advice.


District/Regional and Pakistan Under 19s

I was the leading wicket taker last season in district Under 19 cricket and also the leading wicket taker in regional Under 19 cricket last year so it was a fantastic season for me. Following on from the success of last year, I was then called up to attend the pre Under 19 Asia cup trials and was successful. We held some trial matches in Lahore and things went very well, I took wickets and thankfully impressed the selectors and coaches.

The tournament was my first for the Pakistan Under 19s and it was really pleasing to do so well. The hat-trick against Afghanistan Under 19s was particularly enjoyable as to take a hat-trick at any level of cricket is a fantastic achievement. I feel that I bowled well that day and my confidence was up. I was in two minds as to what to bowl on the hat-trick delivery but decided upon a googly which landed perfectly and bowled the batsman.

The tournament as a whole was great for the Pakistani players and will definitely help us in the future. From a personal perspective I was very proud of my efforts and hope to build on the success of the Asia Cup in future.


Under 19 Asia Cup final against India

It was heartbreaking to lose the final particularly to India. Our fielding let us down in the final and we made some costly errors and dropped some vital catches. However this has made me and my team mates even more determined and I think we will get our revenge over India Under 19s at the World Cup later this year. We were really down after losing the final, but our coaches told us that we tried our best and that we should look to the future.

I’m working very hard on my batting and already I feel that I am showing signs of improvement. I really do not want to be a bowler who bats a little. I want to eventually be a genuine all-rounder.


The Art of Leg Spin

I don’t think people realise just how difficult it is to bowl leg spin. It’s an art that takes years to perfect and to develop those skills. I’m at a stage where I am still learning the art of leg spin and I have lots to learn. However I feel that day by day, match by match I am improving and with more matches under my belt and the more I bowl, I feel the better I will become.

I’ve given myself the challenge of becoming a successful leg spinner and I’m determined to succeed at the highest level.

Shahid Afridi is one of my favourite cricketers and as mentioned earlier he’s the main reason I became a leg spinner. I met him at the National Cricket Academy in Lahore last year and also met him recently in the UAE. Afridi watched me bowl at the NCA and stated that if I kept on working hard at my game I would improve and definitely play for Pakistan one day. He also said that I had all the attributes that a good leg spinner should have, so that was really good for my confidence.

I also admire Shane Warne who is a legend of the game and also Abdul Qadir who was quite simply a brilliant bowler. I watch videos of Warne and Qadir whenever I get the chance and it’s fascinating to watch them bowl and to see how they disguised their variations.

Many young cricketers sign up for departments and hardly get a chance to play. I’ve taken advice regarding this and have decided to play regional cricket for now rather than sign for a departmental team. My focus at the moment is to play regional domestic cricket and Under 19 cricket for my region and for Pakistan.

My dream is to play for Pakistan for many years. I want to revitalise leg spin bowling in Pakistan. I appreciate that there is a lot of hard work ahead for me and there’s lots to learn, but I have faith in my ability and my coaches. I want to establish myself at Under 19 level, in domestic cricket and then hopefully become a regular pick for Pakistan at senior level.