Saud Shakeel is a promising young talent from Karachi who bats left-handed and is also a part-time slow bowler as well. He has been a regular member of the Pakistan U19 squad in recent times. At 18 years of age, Saud has already been making headlines from the time he played in the Inter-region U19 leagues where he captained Karachi Whites and up to representing Pakistan in the U19 World Cup in February/March of 2014. In an exclusive interview with PakPassion, Saud spoke about what inspired him to take up cricket, Pakistan U19s disappointing display in the U19 World Cup final and his hopes of joining the senior team in the near future. 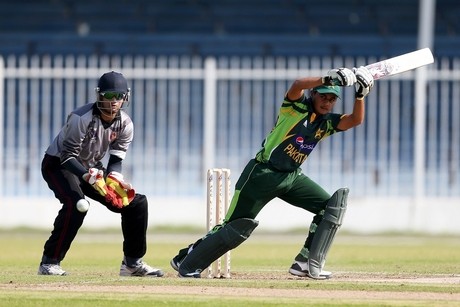 PakPassion: How did you get into cricket?

Saud Shakeel: I used to watch cricket on television with great interest when I was young. I had a craze for cricket and always wanted to become a cricketer when I grew up. I also used to copy the style of cricketers by watching them. My craze for cricket has brought me here.


PakPassion: Who were your role models when you were growing up?


Saud Shakeel: I was a cricket fan and liked every cricketer who played good cricket. But if I have to name one, I'd go with Mike Hussey. He was a brilliant stroke maker and used to time the ball so well that he was a treat to watch. You could watch him bat all day. In Pakistan, I really admired Saeed Anwar a lot. I liked his style of batting very much. He was an elegant player.


PakPassion: How were you selected for the U19s?

Saud Shakeel: I had a craze for cricket and I always wanted to become a cricketer. When I was in my teens, I joined UBL Complex. From there I attended the the U19 trials and was selected afterwards.


PakPassion: You had a mixed U19 World Cup. How do you feel about that?

Saud Shakeel: Yes, the U19 World Cup didn't go according to plan. Unfortunately, I didn't score a lot of runs there, which is a regret. I firmly believe that we should get over all these bad patches as improvement always follows when you learn from your mistakes.


PakPassion:Pakistan U19 seem to have a few jitters against the Afghanistan team prior to the U19 World Cup in UAE. Did that effect the team's preparations for the ICC event?

Saud Shakeel: Personally speaking, I had a fairly good time against Afghanistan. However, our team was bundled out cheaply in the 3rd match and in that match only, I failed to perform. We all went into the U19 World Cup in full spirits and had no negative impact of anything on our minds.


PakPassion: You had a training camp in the NCA as well. How was it for you to train there with state-of-the-art facilities?

Saud Shakeel: The NCA provided us with the best facilities in the world. The coaches and the trainers there at the NCA are very hard working and gave us full support. There is no doubt that the NCA is state of the art and it was a matter of pride for me to work at a venue with such facilities as well under the watchful eyes of some of the best trainers in the world.


PakPassion: What went wrong for Pakistan as a team in the U19 World Cup?

Saud Shakeel: I won't say anything went wrong for us in that event. We gelled as a team and gave our best shot in the tournament. I thought it was a great achievement for us to reach the final, which we could have won, but were unfortunate not to win.


PakPassion: As a player, Sami Aslam has done wonders. How do you see him as a captain?

Saud Shakeel: I must say Sami Aslam is one of the most naturally gifted players in Pakistan. He has proved his worth time and again. He's an exceptional talent and one to look out for the future. As a captain, he's very cool and always motivates us. He sets an example whenever he takes the field and encourages us to do well too. He's a role model for upcoming players.


PakPassion: Which Pakistan cricketer do you admire the most these days and why?


Saud Shakeel: Everyone in the Pakistan side is well deserving and has done a lot of hard work to reach there. I won't name any specific player. Misbah bhai, Shahid bhai, Hafeez bhai and Younis bhai etc. are a source of inspiration for us youngsters and in the newcomers I really like the way Sohaib Maqsood plays. He's technically very sound and hits the ball very cleanly.


PakPassion: What are your future plans and aspirations?

Saud Shakeel: There are no set goals to be honest. I take every match as it comes and it's my aim to perform well in that. As every cricketer, I also want to represent my country one day and that's my ultimate aim.


PakPassion: Which U19 players do you think will make it to the Pakistan team?

Saud Shakeel: It will be very harsh to name few players only as all the players are deserving and have the capability of playing for Pakistan in future. I'd say Sami Aslam, Imam ul Haq, Zia ul Haq, Kamran Ghulam and Zafar Gohar have all done wonders for the U19 team and it won't be a surprise to me if all of them go on to play for Pakistan.


PakPassion: When do you think you can break into the Pakistan senior team?

Saud Shakeel: I am not thinking about it yet. I believe I am still very young and I have a long career ahead of me. My job is to score runs and the rest is on the selectors. Whenever they feel I am good enough, they can call me up. If I had to give an approximate time duration, I'd say in the next three years, I hope to be part of the Pakistan team.


PakPassion: You do a bit of bowling as well. Are they any plans to improve on it and emerge as a proper all-rounder?

Saud Shakeel: Yes, I do bowl a bit as well, but my prime focus is on my batting. I really want to improve my batting first and then think about my bowling, which to me is a secondary option. However, I'd like to be selected in the Pakistan team as an all-rounder.


PakPassion: Physical fitness is a problem being highlighted a lot as a key issue with our players. How are you working on that aspect of your game?

Saud Shakeel: Yes, it's a serious issue and we are wary of it. We go through lots of drills in the fitness sessions at the NCA. We have qualified trainers here like Yasir bhai and Saboor bhai. They are very cooperative and make sure we are fully fit. Even Julien Fountain gave us useful tips to stay fit and healthy, along with helping us with our fielding. We have been given separate fielding plans and we try to implement them.