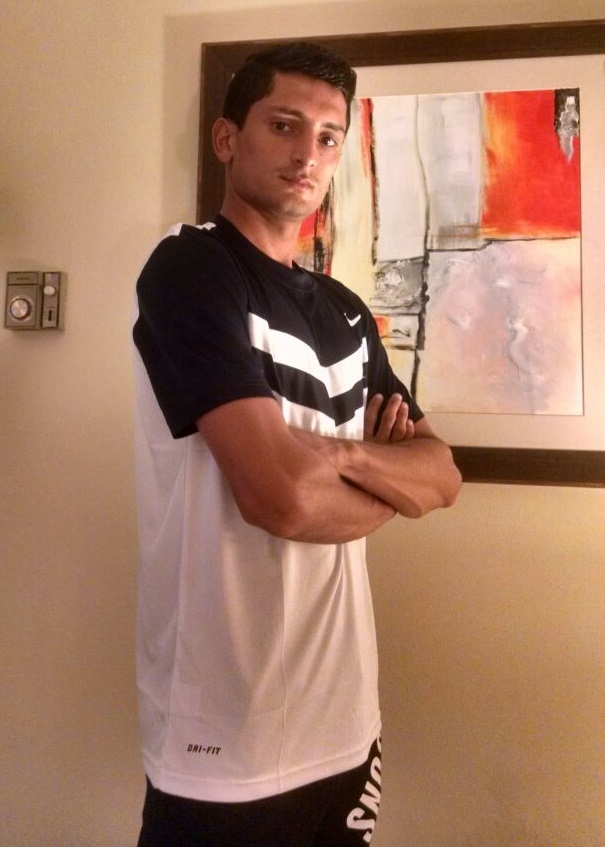 Ghulam Mudassar shot to fame by his performances in the 5th Corporate T20 Cup 2016 in Karachi where he bowled with exceptional maturity to trouble some seasoned batsmen. With forty wickets in the previous domestic season, selection for the Pakistan A team bound for Zimbabwe and a ten-year contract with PSL team Lahore Qalandars, Ghulam looks set for a bright future.

Background and interest in cricket

My family’s origin is from Hazara but I grew up and learnt my cricket in the city of Karachi. It was the usual story of playing in the streets with taped balls at a young age and like every youngster in Pakistan, the interest in cricket was natural. My parents, like other parents in the world, wanted me to succeed in life but they were not happy with my love for cricket and they really did not support this obsession with cricket. The same was the case with the teachers at the Al Maarij school. I had to bunk classes and go for practice without telling parents. Not what I would recommend for others but that is how I had to go about it. Thankfully, now that I have somewhat succeeded in cricket, my family is much more relaxed about this, so much so that my younger brothers would also like to follow in my footsteps which is very pleasing for me.

I have completed matriculation and if time allows, I will do my best to complete the next levels of education. I feel that it is important for cricketers to have education as that can also help in making them better all-round sportsmen and individuals.

My formal introduction to cricket was done at the Fakharuddin Baloch Cricket academy in Karachi at around twelve years of age in the year 2011.

I then followed the normal route of playing Under 16 first in 2011 where I played for Karachi region and then played three years of Under 19 cricket for Karachi region and various departmental teams such as Port Qasim Authority and The State Bank of Pakistan starting in 2012. I also played Grade 2 cricket where I represented Pakistan Customs before making my debut in First-Class cricket in 2015.

I made my First-Class debut for Karachi Whites in November, 2015 and then List A debut for the same team in the National One-Day Cup in January, 2016. I didn't feel any real nervousness or tension in my debut game even though I was up against some quality players in the opposition team, as I knew I had a job to do. Basically if they had bats in their hands, I had a ball as my weapon! With the Almighty’s help, the first season passed by very well where I picked up thirty-one wickets in First-Class and nine wickets in List-A. This is a performance I am really proud of and am really looking forward to the next season to further improve myself.

Most memorable performances so far in First Class cricket

I thoroughly enjoyed all games in the season but obviously my best performances in First-Class where I took 5/28 against Lahore Whites was really special. Although I took a handful of wickets, I feel that wicket of Fawad Alam who was playing for a top quality team such as National Bank of Pakistan (NBP) was probably a wicket which gave me a lot of satisfaction. Similarly, in List A games my best performance for Karachi Whites came in the National One-Day cup when I took 4/84 against NBP where I took some top tier wickets in the shape of Nasir Jamshed, Mohammad Nawaz and Fawad Alam. Of course in the current National Twenty20 Cup, the wicket of Umar Akmal in my debut game in this tournament will always be very special for me as he is a terrific batsman and has been hitting everyone out of the park so far.

My speed has yet to be measured but I am happy to be classed as a fast-medium bowler. I am obviously very much influenced by the great sultan of swing, Wasim Akram in terms of his bowling. I do realise that speed isn’t everything in the modern day game and fast bowlers cannot simply rely on this for wickets. This is why I have been working on yorkers and bouncers as well as other variations but the delivery that I feel gives me the most wickets is the inswinger. I hope to continue working hard on my bowling to refine this delivery further. For this I am lucky to have the advice of one of Pakistan’s best bowlers Aaqib Javed who has gone out of his way to work with me to improve my bowling. The other person who has also helped me a lot in terms of advice is the former Pakistan spin-bowler and now selector, Tauseef Ahmed. It is amazing to have the help of such top quality bowlers and I am sure this will be visible in my future performances.

Opportunity to represent Pakistan A

It was a great moment for me when I heard the news about my selection. It is a dream come true to have the opportunity to have the star which is our symbol on my cap. You will not believe this but I did not sleep for three nights as I was so excited by this news. All my family and friends congratulated me on this. I cannot but thank the selectors for choosing me for the tour of Zimbabwe with Pakistan A. I will be in a squad with some top young players from Pakistan and this is a wonderful opportunity for me to learn and improve myself and hopefully get in the sights of selectors for an opportunity in the senior team. But first I have to make sure that the trust put in me by the selectors is justified and that will be my first goal.

Opportunity to play for Lahore Qalandars

Once again, I can only offer my humble thanks to Aaqib Javed and Muddasar Nazar who have picked me for the Lahore Qalandars team. Aaqib saw me bowl during the 5th Corporate T20 Cup 2016, organised in Karachi by Moin Khan, and he felt that I had something special. He invited me to Lahore where he asked me about my dreams and future goals. When I told him that I want to be the best and represent my country, he said you have the ability to do that and we, Lahore Qalandars, will support you in achieving those dreams. I then took part in open trials in Faisalabad where I was formally identified for selection in the squad. God willing, I will play in the next edition of the Pakistan Super League in 2017. This is indeed an honour as I was one of many others who appeared in those trials. As a result, I now have a ten-year contract with the Qalandars which I am really happy with as it gives me a great platform to achieve higher goals.

I am a great fan of Test cricket and that is the format I would love to play in for my country as that is really the truest test of any player’s abilities. I know I have a lot of work ahead of me which includes just not improving my bowling but also to be able to bat with confidence and field well to reach that level. However, let me also that I will also be happy to represent Pakistan in any other format as serving my country is the ultimate goal of any player and I am not different.