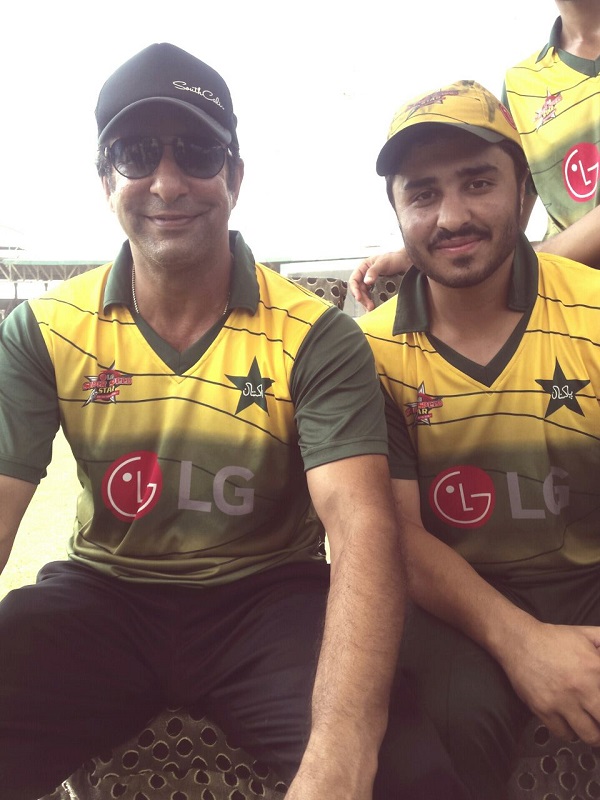 Like most Pakistanis, I was interested in cricket from a young age and started playing tape-ball cricket in the streets around my home. I was lucky that unlike many others, I come from a family which encourages sports. In fact, my father Dr. Mohammad Ali was a footballer who played in the Pakistan Premier League. He was of course interested in football but my interest was always in cricket and he never stopped me from pursuing that interest. With a backing like that, there was no hurdle in me pursuing cricket as an interest and a profession. He encouraged me to play cricket but also asked me to pay attention to education as well.

I completed matriculation in Chaman and then moved to Lahore where I attained intermediate qualification and am now enrolled in the GC University in Lahore where I have completed one semester. I intend to continue my education and hopefully cricket will not be a hindrance to this goal.

Anyone who is crazy about fast-bowling should not look past Shoaib Akhtar if they are looking for a role model. In my view, all genuine speed bowlers in Pakistan use Shoaib as an example and want to emulate him to increase their speed and bowl like him and I am no different. In batting, I want to play like AB de Villiers and I do model my batting on his style of play. Of course, I cannot become him but I do aspire to be like him in the future.

I started playing hard-ball cricket for a local club in Chaman called Afghan Cricket Club where I debuted at the age of thirteen years. I also played for my school but once I joined this club, I was told to only play with them so my school cricket stopped at that point. I then moved to Lahore where I joined the Cricket Center Club in 2013. I then moved on to New Ittefaq group due to it being closer to my place of study. So I played with 3 clubs and have continued to do so.

No one taught me to bowl; I am a self-taught bowler. Anyone who saw me bowl would be amazed at my bowling style and say that I was naturally gifted. It was only in 2015 that I got a chance to be coached properly and what better coach to have as your first coach than the legendary Wasim Akram. This happened in August of 2015 when I was selected for the LG Super Speed Star camp which was held in Karachi and was a lucky break for me. At that time, I was not playing in any district or regional team was just playing club cricket. I was told about the trials and I qualified for the Karachi camp from Baluchistan by bowling at around 142 KpH. This pretty much set my career rolling in the right direction as after attending the Karachi camp, I was selected for the Quetta regional team for who I played four Twenty20 games in September of 2015. Remember, that I had not played any district other regional cricket so this was an amazing promotion for me.

I was told about trials being held in Quetta by the PSL team Quetta Gladiators to select players for a camp to be held in December. I applied for this and was invited to take part in it. These trials were supervised by Moin Khan and Iqbal Qasim and I was picked for the camp as I bowled very quick there. No contract has been offered by Quetta Gladiators but I will be attending this camp and hopefully I can impress them further. This camp will happen before the PSL 2017 edition so I am hopeful that something good can come up from this for my career with a possible inclusion in this tournament in the future.


Bowling at 147 KpH and being selected for the PCB camp

I was asked to attend a PCB regional trial on the 26th of October where I bowled a very quick 147 KpH delivery which impressed some top names like Mushtaq Ahmed. I was selected due to my bowling speed and will attend a camp in December in Multan which will feature players who have been selected from other regions.
Wicket taking delivery

Outswing is what is my favoured delivery which is natural to me but my real weapon of choice is the bouncer which I can deliver at speed. I can bowl Yorkers too but if you wish to scare a batsman so that he makes a mistake then it must be a bouncer which you need to bowl and I am good with that delivery. Whilst a Yorker is effective as a ball, a good batsman can counter it and block it. The bouncer is a much more difficult ball to play which is why I use it as my main wicket taking delivery.

I intend to use all opportunities that are offered to me to gain more experience and to show the world what I am capable of. Whether it is playing cricket for a region or department or in any other league, I will be willing to step-up and show my skills. What is important is that all these opportunities are a stepping stone to my goal of representing Pakistan. I will add that my preference is to play Test cricket as that to me is the ultimate way of judging any player and performing well in that format is what gives you the most satisfaction.
Thanks to Stem Sports and Uzayr Raja for his assistance with this interview
Discuss!