A profile of Sameen Gul who is a young and fast-improving pace bowler from Jamrud in Khyber Pakhtunkhwa. 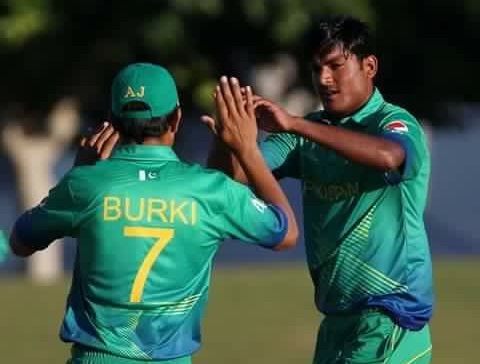 I started playing tape-ball cricket in the streets around my home in Jamrud so the story of my love for cricket is like many others in that sense. There was a lot of opposition to cricket not just by my parents but also from elders in the area where I lived as this was considered a fruitless pursuit and concentrating on education was advised as a better option for me. Whilst my love for the game made me overcome this resistance as I would sneak out of home for practice without telling anyone, I still managed to complete education to a matriculation level.

The South African bowler Dale Steyn has always been my favourite and I have always wanted to bowl like him. Closer to home, I have always liked Wasim Akram and Waqar Younis as they are Pakistan’s best ever fast bowlers. If you ask me who impresses me most in today’s team then it has to be Mohammad Amir.

There were no opportunities to play hard-ball cricket in government funded schools in Jamrud so the only option I had to play proper cricket was by joining a local academy. I did this because friends and people in my school told me that I had the talent for fast-bowling and the only way to do justice to that was to play in one of the established academies. So, I started to go there every Sunday to practice with one of the senior players there and he got me enrolled in the Jamrud-Khyber academy in 2013. Based on my training at the academy, I was asked to join the Khyber Green Cricket Club in 2013 where I continued to perform well, taking four wickets in my very first game.


Under-16 cricket for FATA

In early 2014, I appeared in the Under-16 trials at the Gaddafi Stadium in Lahore for FATA region. This trial was supervised by the former Pakistan fast-bowler Sarfraz Nawaz. I suppose I made a good impression and I was selected to play for FATA region for two games in the ensuing Pepsi PCB Cricket Stars Under-16s Tournament which was held in May 2014. My coaches were very impressed and told me to continue in that way as they felt that I had a great future ahead of me.


The Under-17 England tour and injury

The summer of 2014 was another excellent experience for me as based upon my earlier performances, I was selected to represent Pakistan Under-17s in a One-Day series against the ECB Elite Player Development Under-17s in England. This was a great opportunity for me to experience cricket in a country where the game has its roots but unfortunately for me, I was injured after playing one game. The coaches felt that I had stiffness in my body due to the weather change which was enough to rule me out.

This wasn’t a serious injury but more of a case of the body not adjusting to different weather conditions. A part of the problem was also that I did not have much idea of maintaining my fitness but the result was that it was a short tour for me. I was out of cricket for a good three months before I could recover and start bowling as normal.


Representing Pakistan in the Under-19 World Cup

Once recovered from injury and as part of the preparation for the Under-19 World Cup in Bangladesh in January of 2015, I was selected for a Pakistan Under-19 team which took part in a tri-series involving Pakistan, Australia and New Zealand. I took seven wickets in four games and this again was a great experience for me in Limited-Overs cricket ahead of a bigger tournament.

I have had some foreign tours under my belt and was full of confidence about playing in foreign conditions but of course, any player would love to represent his country in a world competition and I was proud to be playing in the Under-19 World Cup. Although we did not win the tournament, I got to play five games including the all-important quarter-final against the West Indies. I picked five wickets in this tournament which is a memory I will cherish forever.

In 2015 I was picked to play cricket for regional Under-19 teams in Khyber Agency (April) and FATA (September). The games I played for the Khyber Agency were two-day games and I had good success in them as I picked up twenty wickets in five games whereas my association with FATA Under-19s saw me play seven fifty-over games in the Inter-Region Under-19 One-Day Tournament 2015/16. Here I picked up seven wickets which boosted my confidence. My performances in the regional games earned me a place in the Pakistan Under-19 team which toured Sri Lanka in October of that year. At the age of sixteen, being part of a national Under-19 team where I was the third youngest in age was quite an experience and one I enjoyed a lot. I played one 'Test' match and three One-Day games and picked up ten wickets on that tour. More good news was to follow me later that year as I made my First-Class debut in November 2015.

This tournament was a very important tournament and was considered by many at the same level as the PSL. I was lucky that on Younis Khan’s insistence, I was asked to join his KPK team which was an honour. I did not miss out on many games in this tournament and had the awesome opportunity to play against some of Pakistan’s top players. I may not have taken as many wickets as I could have, but being part of a tournament like this was a great exposure for me, especially as I was part of a team who were crowned as champions.

I played my first First-Class game on November 30th 2015 for United Bank Limited (UBL) after my bowling was appreciated during a special young bowlers camp which was held in August 2015 and supervised by the world’s best known left-arm pace-bowler, Wasim Akram. If the road to make my debut was an exciting one, then the debut was a dream come true as I picked up four wickets in our game against Port Qasim Authority.


Influence and advice from Younis Khan

I was overjoyed at playing alongside the likes of such a senior player as Younis Khan at UBL and then later with the KPK team in the Pakistan Cup. He gave me so much confidence and kept on encouraging me during my debut and throughout the season as well.

The delivery I favour the most is an inswinger but I also consider myself an expert in bowling yorkers which will explain the number of clean bowled dismissals I have in the ongoing Quaid-e-Azam Trophy tournament. As far as my speed is concerned, I was measured at 142 KpH during the Under-19 World Cup but on the average I tend to be between the 130-135 KpH mark.

I am really enjoying the season so far. My team UBL is now in the Super Eights stage and I already have twenty-four wickets. This is a tally which I would like to improve as this is exactly the kind of statistic that the national selectors will be looking at when they make decisions.

The chance to play for the national team is all that every young player dreams of. I understand that I have to work very hard and continue maintaining the levels of performances I am putting in now. In terms of preference, I would love to play Test matches but I will also be happy to play in any format as long as I can serve my country.
Discuss!