A profile of Atif Jabbar who has put in some excellent performances in the recently concluded Quaid-e-Azam 2016/2017 Trophy. 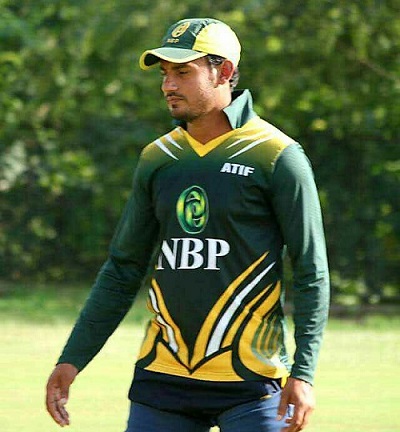 Like most children, I began playing cricket around my home in the village, Ratanpura where I was born. My father had no problem with me playing cricket but my brothers were against it as they were worried that I would not make anything much of myself if I didn’t give my full attention to studies. Thankfully, I did complete my education to the matriculation level.

When I got a little older, we used to challenge other villages for cricket matches. It was during one of these matches that Pakistan cricketer Qaiser Abbas’s brother Nayyer Abbas spotted me and told me to come and play for their club, Muridke Gymkhana. They explained the idea of playing club cricket and asked me to come and practice there and I started playing with them in 2005. I am indebted to Qaiser for working on my skills and for taking me on to play in their club. To this day, I go back and play for the club with both Qaiser and Nayyer so my association with them is truly permanent and I continue to learn from Qaiser till today.

I progressed to Grade 2 cricket and played for Medicam until April 2012. In that period, I also played for Sialkot Under-23s where I picked up twenty wickets in five matches which helped me in getting my First-class debut for UBL in late 2012.


First-Class debut with UBL and disappointment with SNGPL

Once again, club cricket had an important part in my career development. I was playing a game for Medicam when former Pakistan international and former captain of United Bank Limited, Shabbir Ahmed, spotted me and invited me to play for his First-class team.

I played my first game for UBL in November 2012 against Habib Bank Limited (HBL). This was my first game against a team which featured some big names of Pakistan cricket including Younis Khan, Imran Farhat, Asad Shafiq and Umar Gul but to tell you the truth, I wasn’t overawed by the occasion and I did enjoy bowling to Younis Khan especially as he was and still is Pakistan’s premier batsman. That is because I had already had experience of playing big games in my Under-23 days so I settled in well. I took three wickets on my debut which will always be something I will remember.

My stay at UBL started off well but unfortunately the results of the team were not that good. I played a total of three games for UBL and my season ended with them. The next season, UBL decided to disband the team and rebuild it, resulting in Shabbir Ahmed leaving the team. I too followed suit and was picked up by Sui Northern Gas Pipelines Limited (SNGPL).

If I had any ideas of things improving, that notion went out of the window as SNGPL did not allow me more than four games in the season. The reason for that was simply that SNGPL had some prominent players and opportunities were limited for me. Regardless of the reason and maybe the management did not see any real utility in me, I stayed on the benches playing just four games in the whole season.


The 2016 season with National Bank of Pakistan

I joined NBP and I can say that this was the season which I believe has changed my life and helped me realise my true potential. I was third in the list of wicket takers with fifty wickets with a best performance of 7/74 which was incidentally against UBL. But, I suppose the one that gave me a smile was my performance against SNGPL when I took seven wickets in the game and helped my team to a five-wicket victory. I guess they must have seen me bowl and then thought about my worth to them. Yet I don’t believe I did anything very special in this season and really if you look at my Grade 2 or Under-23 records, you will note that I am no stranger to taking wickets.


Role model and style of bowling

I was impressed by only one Pakistan fast-bowler and that was Shoaib Akhtar, but if you look at my bowling, it has always been like Lasith Malinga’s action. However, it would be wrong to say that I have copied the Sri Lanka bowler's action as my natural action is slingy in nature. My favourite wicket taking delivery is the Yorker, especially in First-class games but I can bowl with more variations in the shorter formats of the game where there is a need for such deliveries.

Despite my success in the longer format, I am a great fan of the shorter formats of cricket, especially Twenty20. I am now looking forward to the National One-Day Cup which starts soon to show my worth in that format. I am twenty-six years old but I have the wickets to prove that I can do well at the top level and all I now need is to be part of some of the camps for probables to show everyone that I am a capable bowler. For the moment, my aim is to continue taking wickets and to improve fitness and hope that the selectors will start paying attention to me.
Discuss!