A comprehensive profile of Zeeshan Malik, an upcoming young opener from Chakwal who excelled for Pakistan Under-19s at the 2016 Under-19 World Cup. 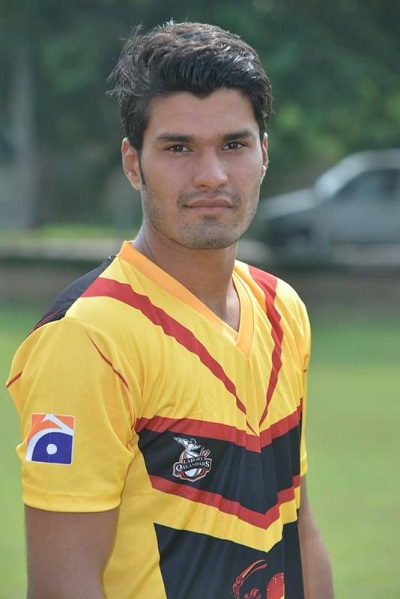 Whilst I was born in Chakwal, my family shifted to Rawalpindi when I was very young. That is where I started to play tape-ball cricket. Based on my performances in this format, a friend of mine asked me to join a local club to play proper hard-ball cricket so I joined the Greenland Cricket Club when I was 15 years of age and the love for cricket has not stopped since.

Playing Regional Under-16 Cricket and joining the NCA

I trialled for the regional Under-16s for Rawalpindi in 2012 and was selected and in that year, I was the third-highest scorer in the Pepsi PCB Cricket Stars Under-16 tournament. I was also the Man-of-the-Match in the final of the tournament where I scored 85 runs and also took 2 wickets. I suppose, based on that I was named in the list of 25 players who got a call from the National Academy for further training where I was trained by Ijaz Ahmed and Mansoor Rana.

Promotion to Regional Under-19 Level

As a result of my hard work at the Under-16 level and subsequent success in inter-district Under-19 tournaments, I was moved on to the regional Under-19s where I played for Rawalpindi region. I made an immediate impact there by scoring 99 in the first game and 208 in the second game that I played. It is this type of performance which got me a spot in the Pakistan Under-17 squad bound for England.

This tour took place in August 2014, and consisted of three One Day matches and one Three-Day match. Once again, I did really well with a fifty in the second match and then did extremely well with 158 in the second innings in the three-day game.

Success at the Pakistan Under-19 level

It started with being given the opportunity to play against Afghanistan Under-19s in a three match series held in Lahore. I scored fifty in the second game which we won by 7 wickets. My next assignment was with the Pakistan Under-19 squad to Kenya where I impressed many who had not seen me play before. I played four One Day matches on this tour and scored a brilliant 154 in the second game and remained not out on 76 in the fourth match.

Experience of playing in a World Cup competition

For any player, and especially a young batsman like myself, playing in such a tournament was the highlight of my career. It was a long and arduous route for me to get to this stage as I went through the regional Under-19 stage and also attended camps before being selected to represent Pakistan for this competition. In fact, in the build-up to this tournament, I played exceptionally well in the regional Under-19 tournament where I completed three centuries in a row during the quarter-final, semi-final and final. Obviously, my doing well in the foreign tours before the Under-19 World Cup also helped in my selection. During the World Cup, I had the honour to captain the team on two occasions as our captain was injured. My batting was exceptional during that tournament as I scored 89* against Canada and 93 against England.

Bowling as an added plus

I don’t bowl that often but depending on the team’s requirements and based upon the game situation, I have been asked to bowl off-spin. I did that on the Kenya tour and also in England but obviously, bowling is not the reason why I am in the team as we do have good bowlers who can do that job much better than me.

I have always been an admirer of AB de Villiers amongst non-Pakistani batsmen but closer to home I really enjoy watching the batting of Mohammad Hafeez and Ahmed Shehzad. I make it a point to watch their batting whenever Pakistan are playing cricket.

The move to First-class cricket

I played in the Rising Stars Cup organized by Lahore Qalandars in 2016 where I was captaining the Rawalpindi team. I scored a total of 171 runs in four games but strangely enough was not selected for the Lahore Qalandar's tour of Australia. But in a sense that disappointment opened doors for First-class cricket for me. I was called for trials for the Rawalpindi squad and made my First-class debut in October 2016. I have played four First-class games and put in reasonable performances but there is definitely room for improvement there. Unfortunately, I have been ignored for the Pakistan Cup tournament for the past two years and I can only hope this will change next year.

My mentor and guide, Sabih Azhar

Sabih is our region’s coach and was a great mentor to me during my Under-19 years. He has been instrumental in my development as he is involved in net practice and guides me on all aspects of my game. Since I have always been associated with the Rawalpindi region, Sabih Azhar has kept a keen eye on my development which is excellent for my progress as a player.

My aim is to continue working hard and not let any disappointments bother me. At the moment, I am very pleased that our team PTV won the Patron’s Trophy Grade II tournament and have qualified to play First-class cricket for next year. I may play First-class on their behalf or may stay with Rawalpindi which is something I will need to think about and decide after consulting with Sabih Azhar.