A profile of a talented young batsman, Saif Badar who has been tipped to be the 'next batting hero for Pakistan' by Lahore Qalandars' Director of Cricket Operations, Aaqib Javed. 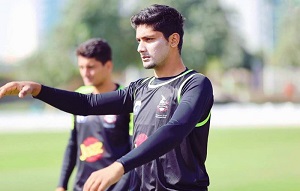 Like all youngsters, my interest in cricket began with playing cricket amongst friends in the back streets of my home in Sialkot. We used tape-ball to play these games and I bowled and batted as I really liked playing the game. My father was also very interested in cricket and he recognised my love for the game at an early age. My mother wasn’t that keen as she was more interested in making sure I studied but in the end, I suppose, my love for the game won the day.

Once again, it was my father who pushed me towards playing proper cricket as one day he saw some other parent taking their child to play what looked like proper hard-ball cricket. My father asked where this was and he was told that it was at special training which was given at Murray College. I then bought my first kit and started off at the age of nine at the college under the guidance of a famous local coach, Imtiaz Ahmed who was also known as Mithoo Bhai. The set-up there was like an academy and youngsters were taught the basics of cricket as well as given match practice. I am to this day grateful to Mithoo Bhai for his guidance and in making me the cricketer I am today.


Exposure to Under-16 Cricket

I continued playing local games in Sialkot and also participated in Under-16 trials a few times but I was told that I was too young and I had to wait another year. In one of the talent hunt camps that happened in our area, the famous former Pakistan player and coach Ehteshamuddin also saw me perform and was very impressed and really motivated me. Finally, in December 2012, at the age of 14 I was able to play for Sialkot Under-16 region. In my first year of playing Under-16 cricket, I was not able to perform and impress others. Understandably, tongues began to wag and people started to speak about how I was not suited for cricket. People started to say that I had been playing cricket for last 4-5 years and still had nothing to show for it at the Under-16 level. These comments really bothered me and I used to think about it a lot and used to wonder what I could do to answer these voices. What also did not help my situation was that my school would not give me time off to play Under-16 matches. My father had no option but to withdraw me from the school and from then onwards, I did all my schooling from home which was what fate had in store for me.

Seems that my luck was about to change as I was selected for District Under-19s in May 2014. Until then, I had very weak performances in all of PCB’s tournaments. But I was afforded a chance to play after missing out on the first three games and the reason I was included was because one of the players had to go to take an exam. I grabbed this chance with both hands by scoring 156* in my debut game. This allowed me further opportunities to play in three games in total in which I was able to score 217 runs. However, whilst I seemed to be scoring runs at will, I was still not considered good enough to play for the Regional Under-19 squad.


Moving from Club Cricket to Regional Under-19 level

The disappointment of not being picked for the Regional Under-19 was not an easy one to overcome but I continued working hard at club level. I played for various clubs and due to my good performances at that level, I was finally selected for the Regional Under-19s. In One-Day matches at that level, I played five games in the Inter-Region Under-19 One-Day Tournament in September 2015. My performances in that tournament were brilliant and I am sure I answered some of my critics as well my own self-doubts. I ended up with an average of 63 and a good strike rate of 89 as I scored 253 runs in four innings. By my own standards, my performance in the three-day version of the Inter-Region Under-19 Tournament in October 2015 was not what I had hoped for. Having said that, I still ended up with 321 runs in seven innings with an average of 46.

I was given a unique opportunity to be part of a training camp for the Pakistan Under-19's tour of Sri Lanka in late 2015. This was a camp consisting of 30 players but unfortunately, I was not selected for the main squad but included as part of the reserves. During this camp I had the amazing experience of being praised by former Pakistan cricketer Ijaz Ahmed. He really appreciated my batting and gave me a lot of encouragement. His words were to prove a great motivation for me in my future.


Tri-series in Dubai in 2016 with Australia and New Zealand

I was selected for this series which was held just before the Under-19 World Cup and did not perform very well in the first 2 games, scoring just 5 and 19. However, I was motivated by our coach and in the game against Australia I scored 53 runs. I then scored 99* against New Zealand after coming-in at number 6 in the last match of the series. We won the Tri-series and those performances will always be very special to me.


Success at the Under-19 World Cup in Bangladesh

This was one of the proudest moments of my career as I was the second-highest scorer for Pakistan in the Under-19 World Cup in 2016. All in all I scored 258 runs in six matches with two fifties to my name. All my hard-work from the previous years and advice of the likes of Ijaz Ahmed seemed to be having an effect as I had scores of 44 against Canada, 88 against Nepal and in the 5th place play-off against England, I remained not out on 75.

I was picked in the emerging players category to represent the Punjab squad for the Pakistan Cup in 2016. It was indeed an honour to play alongside my childhood hero and role model Shoaib Malik who also of course comes from Sialkot. This was my dream to play alongside Shoaib and I was very pleased that my dream came true. What was amazing was that Shoaib also became my mentor and gave me advice during the tournament and also continued giving me tips after the end of the Pakistan Cup. This was an exciting time for me and although I did not perform to my own satisfaction, scoring just 53 runs in five games, I learnt a lot from this experience and I am sure this will help me a lot in my future.


Developing as a batting all-rounder

I started to bowl leg-breaks during the Under-19 days and also bowled a few overs during the Under-19 World Cup, picking up a wicket against Afghanistan. During the Pakistan Cup, Shoaib Malik told me to be prepared to bowl as well but to be honest, my main emphasis was on batting alone. However, I was lucky that I was named for the two-week all-rounders camp at the NCA in May of this year. I was part of a list of 15 players chosen for this camp and fortunate that Mushtaq Ahmed spent some time with me to help me refine my bowling skills. He guided me by helping me understand what I was doing wrong and also provided me help to fix my issues. This gave me more focus and confidence on this side of my game.

I have had a great association with the PSL side Lahore Qalandars. I was part of the Lahore Qalandars’ Jazz Rising Stars team that went to Sydney in November 2016 ahead of the main PSL tournament in early 2017. That was a great experience for any youngster and I really enjoyed the opportunity to play against quality opposition in Australia. I have to thank the management of Lahore Qalandars and also Aaqib Javed for their role in encouraging us youngsters. So, players like Usman Qadir, Mohammad Irfan Jnr and myself were associated with the full Lahore Qalandars squad during the PSL which was an amazing experience for all of us. I did not get to play any games for the Qalandars during the 2017 PSL but I am really hopeful that I will get an opportunity next year.


Areas of improvement in the future

Whilst I have done well in the One-Day and Twenty20 format, I have not been able to perform that well in the longer formats of the game since my Under-19 days. So that is an area which I need to improve upon if I am to play First-class cricket which requires one to play longer innings and get to bigger scores. I am lucky that I have great advice given to me on this aspect of my cricket at the NCA by Mudassar Nazar who told me that the only way to become a good cricketer is to develop the ability to play longer innings. In addition, the likes of Lahore Qalandars coach Paddy Upton and our captain Brendon McCullum also gave me tips on technical issues with my batting and that is what I intend to improve upon in the upcoming months. Once again, being part of the PSL has really helped me learn a lot as even though I didn’t play a game, just sharing the dressing room with such big names has really made me a better cricketer overall.