A comprehensive profile of an exciting young bowler from FATA, Shaheen Shah Afridi, whose height and natural talent with the ball have caught the eye of many pace-bowling enthusiasts in Pakistan. 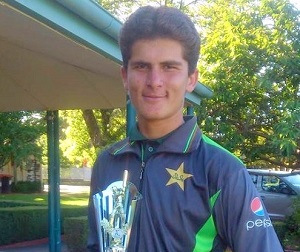 I am the youngest of seven brothers and belong to a family where my father is a retired government officer from Khyber Agency. My interest in cricket from a very early age was driven by the fact that our eldest brother, Riaz Afridi, was a Pakistan Test cricketer and he was my inspiration from a very young age. He taught me the basics of cricket including how to bowl and I will always be indebted to him for that help. Due to his success, there was no opposition to my choosing cricket as a career at home but I have also kept up with my education where I have recently completed the matriculation stage (Year 10).


Being selected for FATA Under-16 without any hard-ball experience

Incredible as it may seem, I had only played tennis-ball cricket until I appeared for FATA Under-16 trials in 2015, thanks to my brother Riaz. This was the first time I was handed a hard ball to bowl with and I was selected for the FATA regional team. I did not disappoint the selectors and picked up 12 wickets and was the highest wicket taker for FATA in PCB’s regional Under-16 tournament later that year.

As a result of my performance in the Under-16 tournament, I was asked to appear in a High-Performance camp in Karachi in 2015 in respect of selection for the Under-16 tour of Australia which took place in November 2015. This was a camp consisting of 20 players and we were all put through our paces in practice games as well as fitness tests. Thankfully, I was picked as part of the 16-man squad for the tour which consisted of three One-Days and three Twenty20 games. As one can imagine, this was a great experience of playing in alien conditions and I feel that I did not disappoint the selectors for their trust in me. In the six games we played, I claimed four wickets which helped us win both the One-Day and Twenty20 series 2-1 apiece.

The period following our return from the Under-16 tour for Australia was a crucial one for me as in this time I continued to impress everyone with some good performances in PCB's Cricket Stars Under-16s Tournament 2016. By taking 19 wickets during this tournament, my name came under the scanner for selection for the important ACC Under-19 Cup which was to be held in Sri Lanka towards the end of 2016. After my fine performances in the regional Under-16s, I received a call to join the camp for the ACC Under-19s Cup selection camp. This was incredible as I was still at the Under-16 level and had played no regional or district Under-19 games. At that point, I felt that to be even called-up for an Under-19 camp for such a prestigious tournament was an achievement in itself. Once at the camp, I was given valuable advice and guidance by the likes of Mudassar Nazar, Mushtaq Ahmed and Mansoor Rana and after performing well in the practice games, I was named in the 19-man squad for the upcoming tournament.


Performance at the ACC Under-19 Cup in Sri Lanka

I was slightly fortunate that despite not playing any Under-19 cricket at that point, I had some experience of a foreign tour due to my involvement in the Under-16 tour of Australia. As a team, we also had the very useful advice given to us by Mohammad Hafeez who had spoken to us during our training stint at the NCA in Lahore. He had advised us about conditions which we could expect in Sri Lanka and the strategies the bowlers and batsmen could adopt for success in the tournament. I believe that this advice proved useful for the team and for me personally. I took five wickets in the three games I played against Singapore, Afghanistan and Bangladesh and was also able to contribute with the bat with 48 runs off just 33 balls in one of the matches. It was disappointing that we did not win the tournament but playing in an international setting was a great experience for all of us.

With the ACC Under-19 Cup experience under my belt, I was much more confident when I played the Inter Region U-19 One Day Tournament 2017/18. It was great to see that I topped the bowling charts in this tournament with 21 wickets to my name in 8 matches whilst I was also the third-highest scorer for FATA region with 154 runs. Later, I also participated in the Regional Inter District U-19 Tournament 2017-18 and took 29 wickets in four matches.

Wasim Akram is a legendary cricketer for Pakistan and whilst I was inspired to take on cricket due to my eldest brother Riaz Afridi, Wasim has always been my idol and I have always looked to copy his style by watching video clips of his bowling. Although I have not had a chance to discuss my bowling with him, I have had the honour of meeting him at an airport. We did not speak for too long as he was on his way to catch his flight but he was with Rashid Latif who knew of my bowling and he told Wasim about me as well.

My out-swing has been the main reason for taking wickets in the past especially in my Under-16 days. Later on, I have developed in-swing also which I feel has given me more options to take wickets. Of course, watching Wasim Akram’s bowling videos has also allowed me to fine-tune my bowling even further. As Hasan Ali has shown recently, having variation in one’s bowling is also important and I also bowl with variety but as always, all that depends on the match situation as well as the bowling conditions. Whilst bowling is a core strength for me, I also consider myself an all-rounder and always play each game with the intention of excelling in bowling, batting and fielding.

As a player, one is always looking to improve oneself and also setting challenging targets in the future. I am no different in that sense and my top target is to represent Pakistan in the ICC Under-19 World Cup in 2018 which will be held in New Zealand. There can be no greater honour than to represent one’s country and I will do what I can to ensure that I am selected for this tournament. Of course, at a personal level, to play in the PSL is another goal I have set myself as well. Before I can achieve any of these targets, I know that a lot of hard work is needed to show the world what I am capable of. I am currently taking part in the FATA Regional Under-19 cricket camp in Islamabad under the supervision of Coach Ayaz Akbar Yousafzai and Saqib Faqeer where we are putting in a lot of work on all skills. The PCB in this regard has done a tremendous job to provide players like us great opportunities to prove ourselves by creating tournaments such as the One-Day Pentangular Cup which is scheduled sometime after Eid. It will be a dream come true if I can book a place in the Pakistan Under-19 ICC World Cup squad and achieve something for my country as well. After that milestone, I would love to take part in the PSL and then work towards representing Pakistan at the senior level as well.