A comprehensive profile of Lahore Qalandars' latest find, Rawalpindi's Harris Rauf, who has taken everyone by storm by clocking the fastest ball recorded in the talent hunt program. 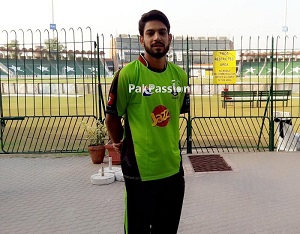 As every other youngster in the country, I started playing cricket when I was a young boy. I used to play street cricket initially, before captaining my school team. I have played cricket outside Rawalpindi as well, but never actually played any club cricket. I used to run on the streets, shadow practicing and rolling my bowling arm over. Even when I was studying, I used to shadow practice a lot. No one in my family has ever played cricket so there was no example for me to follow as such. The passion for the game came from within me.

My family was always against the idea of me playing cricket. A lot of trophies that I won playing cricket were thrown away at home. As would be the case in a typical Pakistani parent, the emphasis was on studies and it was expected that I would study engineering or medicine. Playing cricket was a waste of time as far as my family was concerned. I used to sneak out from my house to play cricket, and when I returned back, I would be scolded for playing cricket. But, I had other ideas. I always wanted to pursue my passion and here I am today. Yes, I was a little disheartened by the opposition from my family but as I always say, your passion always drives you and you must fight for it.


Early days as a cricketer

As mentioned before, I did not play any club cricket at all. I played cricket for my college and university, though. For my college, I won the 'Sportsman of the Year' award. I studied at International Islamic University in Islamabad. My coach at university was Naseer Sahib. I cannot thank him enough for all his efforts. He was the first person to identify the talent I possessed and he always believed in my expertise. If I have reached this far, it is all because of the trust he had put in me.


Aspirations to become an all-rounder

I am quite confident about my batting as well and feel that I can be an all-rounder but at the moment, my focus is on fast-bowling which is my strong point.

Last year, I did not sign up for the first edition of Jazz Rising Stars as I wasn't playing hard-ball cricket regularly then. My coach motivated me and he was the one who believed I could be selected for the second edition should I work hard. This year, I registered for the trials in Gujranwala and got selected. I clocked at 92.3mph, which was the fastest recorded delivery in the talent hunt program.

I have been sent to the Lahore Qalandars Academy, where I have been assigned a personal trainer. I am working hard with him in the gym these days to improve my ground fitness. I am getting special tips from him and have been told that I can improve my speed to a further 5kph-7kph should I work hard on certain areas, including my run-up. I am really excited and am looking forward to working with the Qalandars' staff.

Never in my life did I think I would be sitting with Shoaib Akhtar one day, let alone being compared to him in terms of my bowling speed. He is not only a legend and a stalwart in Pakistan cricket, but also considered legendary in world cricket. I am extremely privileged and honoured by the prospect of him working with me and improving my bowling speed.

As a fast-bowler myself, I was naturally interested in emulating other fast-bowlers and as I come from Rawalpindi, I have always idolized my hero Shoaib Akhtar since my school days. His services for Pakistan cricket are second to none. I have heard the stories of his playing days, when he used to take pain-killer injections every time he ran on to bowl. He has had his troubles, but those obstacles never stopped him from representing his nation. Other than him, I have always liked Dale Steyn. I used to watch his bowling videos and tried to imitate him on the field. Apart from his immaculate line and length, Dale Steyn is a master of swing bowling, and he does it at a brisk pace, which is not easy at all.

As every budding cricketer in the country, my aim is to play for Pakistan one day. It's a gradual process, it will take time, but I hope I get to achieve my dreams. For now, I feel really lucky to be working with the likes of Aqib Javed and Shoaib Akhtar. I am extremely thankful to Lahore Qalandars for staging a merit-based talent hunt program. I may be playing the PSL next year, but I am not sure as of now. I'll continue working with the coaches in the Lahore Qalandars Academy and hope to improve myself further.