A profile of a Rohail Nazir, a young wicket-keeper batsman from Islamabad who has impressed one and all by piling on the runs in Under-16 and Under-19 cricket. 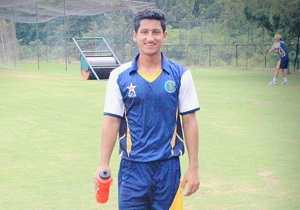 As a family we have always been interested in cricket. One of my brothers, Tahir, is an expert tape-ball cricket player but no-one except me has played hard-ball cricket. I, like many others, started playing cricket in the back-streets with no formal introduction to the game. My father always encouraged me to play cricket as he had an interest in the game as well and that helped me a lot to develop myself.

I did not play cricket at the school level but in 2015 I went for selection trials in Islamabad for the regional Under-16 level and was told that I needed to play club cricket before I could join up. The coaches really liked my batting, but I was told that I wasn’t ready for the demands of that level of cricket but they also said that I didn’t need to feel disheartened at that time. They wanted me to become more mature before trying out for the regional Under-16 team. My name was not included in the final list of selected players for that year which was disappointing. However, looking back that was a good thing for me as I joined Diamond Cricket Club in 2016 at the age of 15 where I was first exposed to the hard-ball which was to help me in my eventual selection for the Islamabad Regional Under-16 squad.

Once I was selected for the Islamabad Under-16s, I was appointed vice-captain and I did not let my side down as I scored two centuries at the Pepsi PCB Cricket Stars Under-16s Tournament in my debut season. This caused my name to be picked for an NCA camp which in turn, lead to my selection for Pakistan Under-16s series against Australia which was held in the UAE in early 2017. Most of the players on the tour were a little stressed about playing a side from Australia but I had no issues with that as I was confident that I could absorb all the pressure. I wasn’t wrong as I ended up with two hundreds to my name as well as seven stumpings and a catch. My performances were appreciated by all and I also made a lot of friends from the Australian team who are now looking forward to seeing me in Sydney during the Lahore Qalandars' tour of Australia.

I was fortunate enough to have played Grade 2 cricket for Omar Associates which was captained by Saad Nasim and was also named for the Federal Areas Squad for the Pakistan Cup in 2017. This team had some big names like Imad Wasim who was our captain as well as Mohammad Hafeez, Sami Aslam and Haris Sohail. Whilst I did not get a game in the Pakistan Cup, the experience of being in a squad with such top players was very helpful for a young player like myself when I played in the Rising Stars tournament for the Lahore Qalandars.

It was an amazing experience playing at this level at such a young age where I represented Islamabad region. I was declared best all-rounder/outstanding cricketer for the 3-day tournament where I scored 508 runs and took 25 catches while also affecting two stumpings; this really was a proud moment for me and my family. Overall, in both One Day and 3-day tournaments, I scored 914 runs to become the 2nd highest scoring batsman and had 44 dismissals in total. Obviously these kinds of performances also helped me in eventually getting selected for the Lahore Qalandars Rising Stars squad for Australia and will of course help me progress in the future as well.

I have had the honour of playing in the Rising Stars tournaments organised by Lahore Qalandars on two occasions. Whilst the first time, it was a new experience, in 2017 I was better prepared due to having played Grade 2 cricket and also being part of the Federal Areas Pakistan Cup squad. To me, the Lahore Qalandars environment is the ideal starting place for any young player. They really do look after their players very well and give everyone a fair chance. During the Rising Stars’ games this year, I was not getting enough chances to bat so Aaqib Javed told me that they wanted to wait for a time until I had batted before taking a decision on the Qalandars squad for Australia. Thankfully, in the last match, I got to bat and scored 29 runs off just 12 balls and that performance played a big role in my selection for the Australia bound squad.


Happy as a wicket-keeper batsman

I am very happy keeping and feel that I can contribute much more doing both jobs. I do not feel any stress doing dual duties and my performances are not affected by this. I have no problems opening or playing one-down at all or for that matter any position as required by the team.

I am extremely indebted to Moeid Shiekh who has been my mentor and coach at the Diamond Club. He has taken great care for my progress and responsibility for my progress. He has been like a big brother to me and helped me based on his own experience. In terms of a role model, I have always been a fan of AB de Villiers as I have always found his style of batting to be amazing and of course, he has also kept wickets for South Africa in the past.

Like any youngster in my position, I am looking forward to a future where I will represent my country but I do understand that there is a lot of work to be done before that can happen. My long-term goal is to play in Tests for Pakistan as that to me is the best way to judge the true worth of a cricketer. In the short term, though, I have a few targets to achieve. The main one is the Under-19 Asia Cup which will be held in Malaysia in November and I hope to be a member of the Pakistan squad and hopefully good performances in that tournament, coupled with a good tour of Australia with Lahore Qalandars should also get me a place in the PSL side for Lahore. All these goals require hard-work which I am prepared to do, God Willing.