A comprehensive profile of a batsman from Karachi who has impressed in a series of List A matches over the past few years and is currently the top-scorer in Pakistan's premier first-class competition, the ongoing 2017/18 Quaid-e-Azam Trophy. 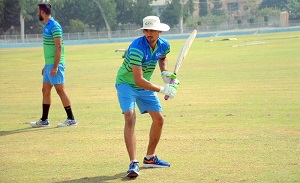 
Developing an interest in cricket

I developed an interest in cricket due to my father, Syed Liaqat Ali, who was a cricket player himself. From a very young age I used to watch him play matches and that put the spark of cricket in me and is the reason why I am playing this game today. Unlike many others, a career in cricket was not frowned upon in my household and my father's love for cricket was a major factor in that attitude from my family.


Playing Under-16 cricket for Karachi

I received no special training to play hard-ball cricket. I was simply blessed with natural talent for which I am thankful to the Almighty. It was this talent which helped me get picked for PCB’s Mobilink Hunt for Heroes One-Day tournament in 2009 for Under-16s. I represented Karachi Under-16s and made 364 runs in 7 games and was 3rd highest run-scorer with Babar Azam at the number 2 position for run-getters. The tournament was my first proper introduction to hard-ball cricket at the age of 15. Before that, my only real connection with cricket had been the odd 12th man type assignment in matches that my father played in. I had also played zonal Under-15 so that also gave me some idea of what was expected at the top-level but the Under-16 level was my big step-up.

The elevation to District and Regional Under-19 level

I was invited to an Under-16 training camp at the NCA after this tournament and after I returned from that assignment, I was asked to play the last 3 games of the Inter-District Under-19 tournament as captain for 3 matches where I scored 271 runs. My career then took a turn for the positive as between September 2009 to Oct 2011 I represented Karachi Zone IV, Karachi Blues, Karachi Whites at the Under-19 level. Along the way, I scored 5 centuries with a highest score of 300* during the Inter-District Under-19 Tournament in May 2011.

In June 2012, I was asked to play in the Asian Cricket Council Under-19 Asia Cup in Malaysia and then went to represent Pakistan in the ICC Under-19 World Cup which took place in August of the same year. Both these tournaments did not yield many runs for me but I did gain a lot of experience from playing in such high-profile tournaments. I was lucky to be part of a team which had some names who are now regulars in the current Pakistan team. Players like Babar Azam who was our Under-19 captain, followed by Sami Aslam, Imam-ul-Haq and Mohammad Nawaz had been my team-mates since the Under-16 days and we really enjoyed each other’s company during these tournaments.


Moving on to First-Class Cricket

My reputation at the Under-19 level due to some good scores resulted in my selection for the Karachi Whites regional team and I made my first-class debut in the Quaid-e-Azam Trophy in December 2012 where I scored 58 in the second innings. This was an amazing experience as I had some top cricket players in my team such as Fawad Alam, Sarfaraz Ahmed and our captain Mohammad Sami.

Whilst I played 5 matches in my debut first-class season, I was still learning so could not get as many runs as I had hoped to score. But as my confidence grew in each season, the run-scoring abilities have grown as well. The ongoing season where I am now playing for UBL has seen me score 175 versus Lahore Whites and 232 against PTV which are examples of my capabilities.

The shift to UBL was driven by my desire to experience a tougher form of cricket in a department team and I will say that I was not disappointed. The current UBL team has some top-class players who have been a pleasure to play with and I am always getting good advice from Sohaib Maqsood and Shan Masood which I am sure will help me improve as a batsman. The UBL players and management are very supportive and I believe their encouragement is making me perform better than ever.

I have always preferred to play in the middle-order and that is where I have scored most of my runs, but of course, I will bat at a position which suits my team so there is no real issue there. My father has always taught me to take my time and settle in which I really feel is the secret of my success so far. I know that there has been a lot of talk about the quality of pitches and so on during the current Quaid-e-Azam Trophy but all I am interested in is applying myself and scoring runs for my team. It is true that conditions can be tough for batsmen but this is where a player’s true abilities come into focus and sometimes hard graft is required to succeed. Thankfully, I feel that I have the patience and the ability to stay on the pitch and score big and I can only thank my father for instilling that quality in me.

I am 24 years of age and time is moving on so I am quite keen to find a place in the national team. I was part of the camp held in Lahore for selection for the Pakistan One-Day squad which toured the West Indies earlier this year. I was observed and I feel that I was well liked by Pakistan coaching staff including Head Coach Mickey Arthur. I am also encouraged by the fact that one of the selectors, Tauseef Ahmed, has seen me in action during the current first-class season and I can only hope that I have done enough to impress him so that he can recommend me for selection later.

I am obviously pleased that players from my batch like Babar Azam and Imam-ul-Haq are now part of the national squad but I suppose it is sometimes a matter of luck as I don’t believe I have done any worse in the domestic level than any of the others. Given my skills in all formats of the game, I feel that I can be a good pick for any of the PSL teams should they wish to select me. Whilst I am confident that I can play in all formats of the game, my preference is to play in the One-Day and Test formats. I understand that there are some sceptics who feel that players who play the shorter format of the game are unable to succeed in the longer form but as I have shown, that is not true and hopefully I can prove that by playing for Pakistan in the future.