A profile of Mohammad Taha who is a promising young batsman from Karachi and has recently been in the limelight due to his fine performances in the ACC U19 Asia Cup. 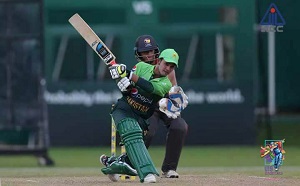 It was the usual story of playing tape-ball cricket in the backyard or streets around my home when I was very young. My father used to play cricket on Sundays and I would go over to watch him play local games and that is where my interest in playing proper cricket seems to have come from. Thankfully, I belong to a family which has always been very fond of cricket so no one in my household had any objections to my intense interest in cricket and I took on this game with their blessings. Obviously with my interest in cricket, my education has suffered so I am still looking for time to complete my matriculation at school. It's not that easy when you are playing cricket most days of the week so hopefully, I will be able to complete all requirements for this qualification in the near future.


Playing regional Under 16 cricket for Karachi

After playing cricket at the zonal level in Karachi, I was selected to play in the PCB-PEPSI Cricket Stars U16 Two Days Tournament for Karachi U16s in May 2016. I played as a batsman for this team where I was the top-scorer 514 runs in seven matches and also took 33 wickets. Later that year, based on my earlier performances, I was appointed captain of the Karachi U16s where I lead my team to victory in the PCB-PEPSI Stars U-16 One-Day Tournament, scoring 545 runs in eight matches. I also went to Dubai to play an U16 series but that didn’t work out too well for me as I only scored 64 runs in 3 One-Day and 3 Twenty20 games.

Due to my excellent performances at the Under-16 level, I was asked to play for the Karachi Region Whites U19s where I scored 491 runs in the Inter Region U19 Three Day Tournament 2017/18 and over 350 runs in the Inter Region U-19 One-Day Tournament 2017/18. I was then named in the squad for the ACC U19 Asia Cup which was played in Malaysia and joined the training camp for this tournament at the NCA. Whilst practising at the NCA, my batting was appreciated by all coaching staff including our coach Mansoor Rana which gave me a lot of confidence for that tournament.


Experience of playing in the ACC U19 Asia Cup

I had a lot of confidence in my abilities as a batsman and that is a must for any batsman. I knew that I was there in the Pakistan U-19 squad because I had achieved something before so there was no need to feel inferior to any of the big batsmen who were playing in that tournament. I was really proud of the fact that I was representing my country in this tournament and this was not a small thing. This kind of thinking played a very important part in my good performances in Malaysia.

Whereas my personal performance was satisfactory as I was top-scorer with 250 runs and also took two wickets, I feel that as a team we did not perform as well with the bat as we should have and were perfectly capable of doing. It is possible that we were a little overawed by our opposition and read too much in their past performances. We had all been playing cricket from a young age and we had always been taught to play the ball and not the bowler, but we seemed to have forgotten that lesson during the tournament and our results were far from satisfactory due to that reason.

My batting style changes with the demands of the situation. I believe that a batsman who can score runs is better than one with a good style of batting but has no runs to show for it. I also do not believe in emulating any other cricketer as my belief is that a batsman needs to be true to himself and needs to play to the best of his abilities as that is all that counts in the end. Although I can bowl well, I always play as a specialist batsman and I would prefer to be known as a batting all-rounder, a good batsman who can bowl as well.


Hopes of playing in the ICC U19 World Cup

Every player in the world dreams of representing their country in the ICC’s top tournaments and I am also very excited and looking forward to selection for the ICC U19 World Cup which will be played in New Zealand in January-February 2018. Of course, the final decision for my selection is with the selectors but I am confident that my performances in the ACC U19 Asia Cup as well as those during the U19 regional tournaments will be taken into account when the squad is named. If selected, there is no doubt in my mind that I will do my utmost to put in the best performances and help my side win the U19 World Cup. I do hope that a good showing in the U19 World Cup will also open doors for further success and a place in senior teams in the future.