A profile of a young batting all-rounder from South Waziristan whose big hitting in the recently concluded National T20 Cup caught the eye of many Pakistani cricket enthusiasts. 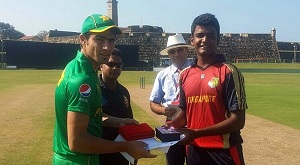 I first got interested in playing cricket watching my elder brother who used to play every Sunday in a ground nearby our house. I would accompany my brother and carry his kit. Sometimes I would get to pick up his bat or at other times, throw the ball at batsmen. At that time, I also saw players from the Bajwa Cricket Academy which was run by famous coach Asif Bajwa. I liked the way Asif Bajwa would enforce discipline and teach the young kids how to bat and bowl; the effort he put in was great and I too wanted to be part of this setup.

I told my father about it and he took me along for trials, but I was only 11 years old and I was told that I was too young to join the academy. But I didn’t give up and I would go to the Bajwa academy with my kitbag on a bicycle on a journey which took almost 2 hours. I was eventually admitted in the academy but for the first 2 years I was only allowed to field. I only got to bat in 2012 after putting in some hard time in the field, but I made an impact immediately when I made my batting debut. I recall that in that game, I went in to bat a time when eight wickets were down and the team looked like losing this match. I came on the field and scored 29 runs to win the game for the club. Asif Bajwa was really impressed by my batting and I became opener for the club for a few years.

Playing U16 cricket for Rawalpindi region

With the confidence of playing club cricket, I went for trials for regional U16s in 2012. At that time, I had little idea of how the whole system worked and what level of maturity was expected of players but I am thankful to Asif Bajwa who got me ready for these trials and his work made sure that I was selected for Rawalpindi Under 16s. Because of his support, my confidence was sky-high as I played my first U16 regional tournament, the Pepsi PCB Cricket Stars Under-16s Tournament 2012/13, where I was the top scorer with 220 runs. The next year wasn't that productive for me as I just played 2 games and scored only 43 runs in total, but for me all that was part of learning to cope with ups and downs in cricket and hopefully, that was a lesson I learnt for my future.


Joining Gul Club in Rawalpindi and playing U19 for Rawalpindi Region

On completion of my U16 years, I said goodbye to Bajwa Club and joined the Gul Club in Rawalpindi in 2015 as that was a better placed club for U19 cricket. I was then selected for U19 team for the Rawalpindi region. Despite some initial difficulties where my batting position was not settled, I found my place in the team as an opener. Then in the Inter-Region U19 tournament (2015/2016), I played 5 matches scoring 233 runs and had an impressive haul of 15 wickets. These performances did not go unnoticed by the selectors when it came to selection for the squad for the ACC U19 Asia Cup in 2016 which was held in Sri Lanka.

I was invited to a preparatory camp for the ACC U19 Asia Cup in 2016 and was selected to play for the team. They asked me if I would like to captain the team and I agreed even though I had no real experience of captaincy at this level. I suppose the weight of captaincy on my shoulders took its toll and I could only score 70 runs in the tournament, although I took 4 wickets which was somewhat satisfying. As a team, we could not qualify for the semi-final stage and so overall this was not a great outing for the Pakistan U19s.


Experience of playing Pakistan Cup in 2017

I played two matches for Punjab team in the Pakistan Cup in 2017. Although I had always played as an opener, for some reason, I was asked to play as a fast-bowler. Whilst I am quite happy calling myself an all-rounder, it was a tough call for me as this was my List A debut season and I did not perform that well, scoring just 27 runs and taking one wicket in 2 games that I played.

I played three games for Rawalpindi in this tournament but the one that I and many others remember was my innings of 42 against FATA. This was a tough run-chase, but I really enjoyed it and contributed in my team’s dramatic victory with one ball remaining. I really like playing Day/Night cricket and when I was told the day before that I will open the innings, I was really happy, and I guess my confidence paid off on that day. I did enjoy playing those big shots that day and hopefully this is the first of many such innings I will play in the future.

I feel that I can serve any team I play in as a fast-bowling all-rounder who can open the innings in batting. In terms of a role model, the Indian all-rounder Hardik Pandya is my role model. I really like and enjoy his style of play and I like many was impressed in the way he played against us in the final of the Champions Trophy. Faheem Ashraf is another player I admire but since I am a right-hander, Pandya is closer to my style of game.


Hopes of playing for Pakistan A and future aspirations

Like any other player of my age and experience, my eyes are focused towards representing Pakistan A in the future. Hopefully based on good performances at that level, I will look for a position in the Pakistan senior side. Along the way, I would like to be part of the Pakistan U19 squad for the ICC U19 World Cup which is to be held in New Zealand early next year. The selection camp is underway, and I am hoping that I will get selected for this major tournament. Of course, the Pakistan Super League (PSL) is also one of the big things in Pakistan cricket and I would be overjoyed if I can get to play in one of the teams for this prestigious tournament.