A profile of the highly-rated pace bowler from Islamabad, Muhammad Musa, who impressed with his recent performances in the 2018 Under-19 World Cup and who many believe has a bright future in the game. 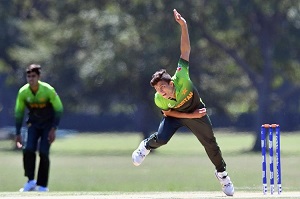 Our family moved to Islamabad about 15 years ago from Chitral and I was interested in cricket like any young person of my age and started playing cricket when I was in school. I had complete support from my father and my family as they are all great fans of the game, but other people in the area thought that cricket was not a proper profession and were against my playing cricket for a living. But, my move into proper cricket came when my cousin who was a club player himself told me that I had real talent and that I should play in a proper cricket club.

At the age of 16 in 2016, I joined the Islamabad Gymkhana Cricket Club. I was always interested in bowling fast and when I first bowled at the club I didn’t know much about what length to bowl at and so bowled some short deliveries and hit one batsman on the ribs and another on his helmet; the coach quickly took the ball away from me and asked me to go easy with that type of bowling.


Disappointment playing in the North Zone District Under 19 team

I was selected for North Zone District Under 19 team after trials in 2016 but I was not given a chance to play in the first inter-district game. I was so disappointed at this point that I was literally in tears as I thought I had no chance in the future. My coach in the team tried to comfort me and told me that I should not worry about this temporary setback as he felt that I had a bright future ahead of me. I was not to have much success with the North Zone team as I managed to take just one wicket in the one game I was asked to play. At this point, I was justifiably starting to lose hope of playing for the regional Under 19 team. But I carried on working hard with the expectation that this would help me go further.


Promotion to playing regional Under 19s

I was invited to take part in Regional Under 19 trials and I bowled with all my strength to scare a few batsmen. The selectors looked at my bowling and said that my selection was a must and I suppose my career took off from that point. In the Regional Under 19s stage, in 9 matches during the Inter-Region Under-19 One-Day and Three-Day tournaments, I had 28 wickets to my name which was a phenomenal start for me.

My success in the Inter-Region games lead for me to be called for a camp at the NCA where I was selected for the ACC Under-19 Asia Cup which was held in Sri Lanka in late 2016 but unfortunately I was not given an opportunity to play in this tournament which was very disappointing. But I made a promise to myself that if selected again, I would make sure that I had enough performances under my belt that they would not ignore me like this.

I was selected for the next instalment of the Under-19 Asia Cup which was held in November of 2017 and as I had hoped, I was asked to play in all 5 games that Pakistan played, where I took 9 wickets at an economy rate of 3.71. This made me the highest wicket-taker for Pakistan Under-19s in this tournament. I cannot describe in words the happiness I felt in representing Pakistan and also for being the highest wicket-taker for my side as I felt that all my dreams had come true and I had fulfilled the promise I made to myself before.

It was an amazing experience taking part in a tournament like the U19 World Cup. Representing one’s country is always special but being in the World Cup was truly amazing. As for our performance, well it was disappointing as we felt that we were doing really well until we played against India in the semi-finals and lost. Of course, the Indian batsmen played well but then our bowlers had the ball in their hand to take wickets and our batsmen also had our bats in hands to score runs, yet we failed. I feel that our batsmen should have done better and made a match of it. Win or loss is part of the game, but we should have fought all the way but sadly we didn’t. I don’t think we were under any pressure or felt fearful as a bowling unit but personally speaking, it was the opposite for me. I was filled with enthusiasm and fire to succeed against India but in the end, I let my feelings get the better of me and bowled without direction, giving away far too many runs. Obviously, the World Cup was a great opportunity for me to show my true worth to the team, but I failed to take this opportunity and that is disappointing. Hopefully, I have learnt my lesson and will be more mature in my approach in the future.

We were very fortunate that at the end of the semi-final game, the Indian Coach and former batsman, Rahul Dravid spoke with one of our players, Shaheen Shah Afridi. Unfortunately, I was already in the team bus when this meeting took place but Shaheen told me that Rahul Dravid praised both of us, saying that we were excellent bowlers and in the upcoming 3-4 years, we will become even more successful.

The two fast-bowlers who I have always been impressed by and whom I admire a lot are Waqar Younis and Shoaib Akhtar. I have watched videos of their bowling for hours and still watch them today. These bowlers have done wonders for our country and I would like to do the same for Pakistan one day, God Willing.

During the ICC Under 19 Cricket World Cup, I managed to bowl close to 147Kph which was amazing. I asked the officials and some experts about my bowling and specifically about any issues with my bowling action or run-up as I want to make sure everything is perfect with my bowling and they all told me that I was fine. These experts also said that if I continue bowling like this, I had the potential to increase my pace even further within one year. I have full faith in myself to achieve better speed with my bowling and God Willing will show more improvements in the future. In terms of wicket-taking deliveries, I feel that the bouncer is my most effective weapon and one that can get me wickets. Apart from that I can bring the ball into the batsman which can cause problems for him and also result in inducing false shots.

I understand that I need to work very hard as playing Under 19 cricket is not the goal as a cricketer. The real aim is to play for my country in the senior team and to fight as hard as my body allows to make sure that Pakistan win. I am hoping to continue improving my bowling skills and if I get a chance to play in more Under 19 and Pakistan A matches, I will show everyone what I am capable of. Playing in first-class cricket is another goal for me and hopefully, if selected for one of the teams, I can put in good performances and then be noticed by national selectors. No first-class team has spoken to me yet but then these things happen quicker when one has some connections which unfortunately I don’t at the moment. However, I have full faith my own abilities and hopefully such opportunities will come my way soon.