A comprehensive profile of Arshad Iqbal - A tall, right-arm fast-bowler who has starred for the Pakistan Under-19 team in Youth ODIs against Australia, New Zealand and at the 2018 Under-19 World Cup at the tender age of 17. 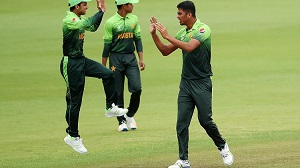 I had an interest in cricket from a very young age where I used to play in the village of Maneri which is in Swabi. I didn’t get that much support from my parents as they wanted me to concentrate on studying rather than playing cricket. When I was about 14 years of age, I started to play tape-ball cricket. People who saw me play tape-ball cricket were very impressed and advised me to play hard-ball cricket and I joined the Gohati Cricket Academy where Pakistan spinner Yasir Shah and Junaid Khan, the Pakistan fast bowler have also played from.

In a few months' time after joining the Gohati academy, I took part in the District Under 16 trials and was selected for Abbottabad Under 16s. However, I did not do that well at the Under 16 level where I took just 2 wickets in the PCB-PEPSI Cricket Stars U-16 Two Day Tournament 2015.


Promotion and success at the District and Regional Under-19 levels

A year after my setback at the Under-16 level, I was selected for Swabi Under-19s in the Regional Inter District Under 19 Tournament 2016-17, where I took 23 wickets in 6 games. Subsequently, I appeared in the Regional Under 19 trials and was selected for Abbottabad Region Under-19s. At this level, I struggled somewhat in the One-Day games but finished as joint top wicket-taker for Abbottabad in the Three-Day format. I was selected for the high-performance camp in Multan in 2016 and then returned in 2017 to play Inter-Region U19 tournaments. I played 5 One-Day and 7 Three-Day games for Abbottabad Under 19s and picked up 41 wickets in those matches, with 35 of them coming in the longer format where I topped the charts for my team.

It was an exciting time for me as I was picked as a reserve player for the Pakistan Under-19 team which went and played in the Asia Cup. Unfortunately, my services were not needed by the Pakistan Under 19s during this tournament but it seemed that my hard work was to be rewarded later with a place in the ICC Under 19 World Cup squad.


Experience of representing Pakistan in the Under 19 Cricket World Cup

I suppose after the disappointing performances in the Asia Cup, the selectors decided to look at other players as options for the all-important ICC Under 19 World Cup. I was called up and we had a number of practice matches where I bowled really well and impressed all the coaches and selectors. Amongst the senior coaches were the former Pakistan batsman Basit Ali and our Under 19 coach, Mansoor Rana who both really appreciated my bowling and made some encouraging remarks. This, I felt, was a great opportunity for me; the hard work I put in after not being selected in the main Under 19 squad for the Asia Cup seemed to have paid off with my selection for the Pakistan Under 19 World Cup squad.

As a team, we felt that we were heading in the right direction before the World Cup, starting with some great performances in the warm-ups and in One-Day series against Australia and New Zealand. As a fast-bowler, I really enjoyed bowling in Australia as the pitches provided good support for my style of bowling. Finally, when the World Cup started, I felt very honoured to be representing Pakistan at such a stage. This is something every young player dreams of and I was lucky to have been given that opportunity.

Victory and defeat are part and parcel of a sportsman's life, so I suppose, the loss to India in the semi-final whilst disappointing is something we took on the chin. Personally speaking, I was very happy with my own performance in that game and I really enjoyed taking the wicket of Riyan Parag as he was caught behind off my bowling at a time when India were scoring well; also, the ball was a little older which made the dismissal even more special. To be honest, to bowl alongside the likes of Mohammad Musa and Shaheen Shah Afridi was a unique experience as we all helped and supported each other out and I do hope that we can all bowl together for the Pakistan senior team one day, God Willing.

I have always been impressed by Wasim Akram and Waqar Younis and have followed their performances. They have also inspired me a lot in my life as I wanted to swing the ball like Wasim Akram and bowl yorkers like Waqar Younis. Of course, Yasir Shah who is also from my area has been a great support for me and also provides me encouragement and support whenever I meet him.

My most effective wicket-taking ball is the one I can bowl with out-swing which is also my natural manner of delivery. So, I am able to bowl at a good length and the batsmen then plays at it and the ball ends up in the hands of slips or with the wicket-keeper. In terms of speed, I am told that I have hit about 140Kph although I feel that with more training and by following the plans provided to me by my Under 19 coaching staff, I can improve this further.

Like any young aspiring cricketer, I would like to play for my national side but to do that, I know I have to work very hard and show selectors what I can do. For that to happen, I will need to play first-class cricket and it is my wish to play for my favourite departmental team SNGPL at some point soon. I have spoken to Abdul Razzaq at SNGPL about my wish to play there and have also taken part in trials for the team, so I am hopeful that I will get to play first-class cricket next season.