A profile of the talented fast-bowler Naseem Shah, who has been making waves with his impressive pace-bowling for Pakistan at the Under-19 level. 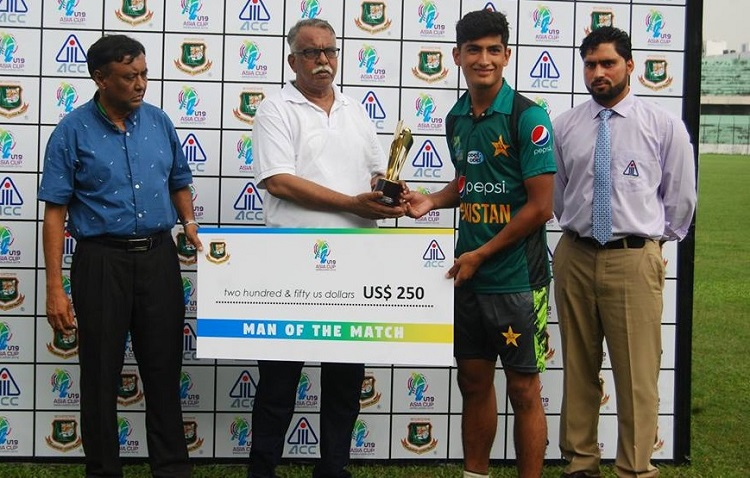 I was born in Lower Dir and from a very young age, I loved playing cricket even though no one in my family was really interested in this game. Also, my parents weren’t in favour of me taking this game seriously, but I started off playing tape-ball cricket around the streets of where we lived. I also used to play tape-ball matches where people told me that I had the talent to play hard-ball cricket.

Whilst I had the desire to play hard-ball cricket, I had no way of doing that in Lower Dir. So, it was my brother who recognised my love for the game and took me to Lahore and got me enrolled in the Abdul Qadir Cricket Academy.

I had good success at the academy and as a result of that played for Lahore Under-16s where I was the top wicket-taker with 32 wickets in 8 matches with best figures of 6/23. I was really happy with these performances which caught the eye of the selectors for the series against Australia Under 16s played in Dubai in January 2017.

First taste of playing against a non-Pakistan team

This was of course a very exciting time for me as we travelled to Dubai and took on a foreign side. The experience of playing at the ICC Cricket Academy ground was amazing as was being part of a Pakistan side in a tournament. In all, I played 5 games during this series, 2 T20s and three 50 over matches. Whilst my performance in Twenty20s was satisfactory as I took 2 wickets in 3 games, it was in the 50 over matches where I made a big difference taking 6 wickets in 3 games and was the second highest wicket-taker for Pakistan.

My introduction to the Under-19 stage of cricket was through the Inter Region Under-19 One Day Tournaments in 2017 and 2018. Both years were excellent for me, but I had exceptional success in the 2018/2019 season where I took 25 wickets in 8 games and was the second highest wicket-taker.

There was a lot of buzz around this tournament as the main Asia Cup had ended so there were a lot of expectations from our team to succeed but unfortunately, we couldn’t win some of the key games.

Whilst I had a fairly good game against Hong Kong, I only ended up with 6 wickets in total with my best figures of 5/13 in the only game that we won. I was satisfied by my own performance and I think the reason I could not get more wickets was that I was attacking more in the games against Bangladesh and Sri Lanka and in such a scenario, if you don’t take wickets then you go for runs.

I feel that as a squad we did not practice that much together apart from a short camp whilst the squads of other countries had been together for many months and it showed in the way they played. I still feel it was a great learning experience for me and hopefully I can put that learning to good use later in my career.

The one bowler who I admire is Shane Bond. I have watched many of his videos and copy him so much that a lot of people tell me that I bowl just like him. Among the Pakistani bowlers, I am a great fan of Waqar Younis who is a legendary bowler. I have also met Mohammad Hafeez at the NCA a few times and he has been very helpful to me for which I am grateful to him.

I bowled fairly quickly in the recently concluded ACC Under-19 Asia Cup but there were no speed-guns there; whilst bowling in Pakistan, I have been told that my speed is easily in excess of 140KPH. I get most of my wickets with in-swinging deliveries and that is also my favourite style of bowling too.

My development as a cricketer seems to be going in the right direction as I have now moved to first-class cricket after debuting for ZTBL in the ongoing Quaid-e-Azam Trophy. My season was interrupted a little but for a good cause as I was selected for the ACC Under-19 Asia Cup squad, but I am now back in Pakistan and will be playing for ZTBL once again.

I really want to do well in first-class cricket and would eventually like to get noticed by the national selectors. Like any other players, my dream is to play for my country and I got an idea of that feeling when I played for the Pakistan Under-19 team recently. I would not only like to play for my country but also put in some good performances which would make me proud as well. Along the way, I would be really happy if I am picked by any team in the Pakistan Super League where I can showcase my skills to the world.