A profile of an aggressive top-order batsman from Okara who has caught the eye of Pakistan cricket enthusiasts with some impactful limited-over performances in domestic cricket. 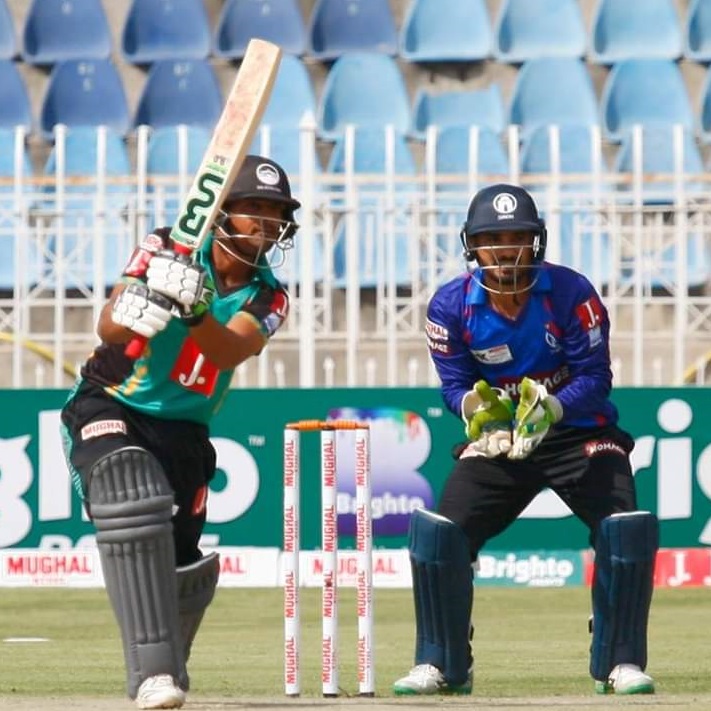 My elder brothers were keen cricketers in Okara and were regular players in local tape-ball cricket. Initially, they would take me along to watch them play and then when I was a little older I would join in with some of the matches. Back then, it was just for fun and I would imitate Sourav Ganguly, Brian Lara and Saeed Anwar with my batting-style.

My first experience of hard-ball cricket was at Government Islamia High School in Okara where I went for trials and was picked as captain. In my first match I scored a century, in my second match I scored 95 and I was very successful at the school level. Whilst at school, I also took part in an Under-15 tournament organised by the PCB for the local region and that too was another successful time for me.

At the age of 15 when I was still competing in school cricket, I played a tournament final at the main Okara cricket stadium where Mian Munir, a local cricket official and someone who also represented Multan region and went on to represent Multan on the PCB Board of Governors was present. He was the Club President at Okara Gymkhana Cricket Club and he and his senior officials watched me batting and liked what they saw. After the match they asked me to go for trials at the Gymkhana Club. I went for trials and they signed me up and ever since then I have played for this club, despite many offers from other clubs over the years. I’m currently the captain at Okara Gymkhana and Zulfiqar Babar also plays there. I owe a lot of gratitude to Mian Munir for his support from a young age till now.

In Pakistan you need guidance and in my younger days, there was nobody to guide me so Under 19 cricket became a vacuum for me. In Pakistan, everyone alters their age to show that they are younger and I wasn’t wise to that and missed out for most of the years when I should have been playing at Under 19 level. I went for Under 19 regional trials and got selected but I got limited opportunities due to over-age players getting chances ahead of me. In 2008, when I did get some chances at the age of 17, I was making 30s and 40s and a few 50s with a few matches rained-off. The same happened in the next season where I only played a few matches, making 30s and 40s when I got a chance to bat. Then in my third season of Under 19 cricket, I had my best season and got picked for the Under-19 Regional team. But I flopped at the Under-19 Regional level and in 4 innings my highest score was only 14. During this time when I was struggling, some players were making accusations of nepotism against me, despite me earning my spot through good performances at the regional and district level.

After the accusations of nepotism, I said to my team-mates that I would prove them wrong with my performances and would eventually make my way to First-Class cricket. I started to work with a coach in Lahore, Izhar Ahmed Siddiqui, an elderly man but someone who was still super-fit. He would match me doing my fitness drills and match me doing laps around the ground. He really worked hard with me and this time working with Izhar was very beneficial to me. After that I enjoyed a couple of good seasons in Regional cricket but I was still overlooked by any First-Class teams in 2011 and 2012.

This tournament was in Faisalabad and I played in the same team where Asif Ali scored a hundred. We were both making our debuts and I scored 35 off 13 or 14 balls batting at number three. After that innings, I only got a chance to bat at number 6 or 7 in this tournament

The importance of Wasim Haider

After being overlooked season after season by First-Class teams, Wasim Haider was important for my career after he watched me playing and he gave an opportunity in First-Class cricket for Multan in 2013. I made a half-century in the second innings on debut and I made a steady start in the next few matches also at this level. When Wasim Haider watched me bat, he thought I had it in me to play in the Limited-overs formats too and I was given a chance for Multan Tigers. On debut, I scored 71 off 53 balls and I finished as third-highest scorer for my team.

I was then in 2013 picked in the squad for Pakistan Under 23s who were due to play an Asia Cup tournament in Singapore. But then I was dropped for the reserve players for this squad and I missed out on this tournament.

Unfortunately, then in 2014/2015 Multan were relegated to Grade II and this started a very tough period in my career. I wasn’t picked even for Grade II cricket and just played club cricket when I was given the chance. I was playing in local tournaments and doing very well, but the chances for Multan just weren’t coming. Then an opportunity arose when a new departmental team for Grade II was formed, called Ghani Glass. They called me for trials and their captain Moiz Ghani asked me to start playing for them. The coach there was Mohammad Ramzan who played a Test for Pakistan and I learnt a lot from him whilst playing for Ghani Glass and was top-scorer in the PCB Patron's Trophy (Grade II) 2017/18 with 512 runs in 6 matches with two 100s and two 50s.

Last year, the offers started coming in to play First-Class once again. ZTBL, KRL and State Bank all offered me contracts but playing for your Region is special and I declined the offers of other teams and played for Multan again. While I struggled a little in the longer format, I made almost 500 runs during One-Day matches last season.

I was picked by Lahore Whites for the National T20 Cup in December 2018 but in that tournament, I was given opportunities down the order as the team had Kamran Akmal, Salman Butt and Umar Akmal. I had been an OK tournament for me, not great, but it was not bad. We won the tournament but I could have done better.

I opened the batting for Balochistan with Awais Zia in this 50-over tournament. In our team's win over Sindh, I made 75 which was the second-highest score of the innings.

I never gave up and never lost belief. There were some very bad days and some days where I had enough of cricket, but my father who is also my best friend has really supported me through the tough times. When things are not going well, it’s important you have good supportive people around you and I am lucky that I have my father and a couple of good friends who have been around for me. They always said to me that better days would come, don’t give up on cricket.

It was a brilliant tournament for me where I was named player of the tournament after scoring 395 runs at an average of 66 and strike-rate of 175. Everything clicked into place and after all the tough times, when you have this sort of tournament you savour it and realise that all the hard work was worth it.

I was picked for Southern Punjab Second XI although I am hopeful that the call-up to the First XI isn’t too far away. The players are really under pressure to perform in the new domestic structure as the competition for places is really intense. I’ve seen quite a few players who are now without any income and even those who are playing are struggling. In addition, some players have been around for a long time and they are sometimes preferred over players who haven’t been playing too much cricket. It’s almost like a seniority rules scenario.

Being a left-handed batsman, my favourite cricketers and heroes are Kumar Sangakkara and Saeed Anwar. Both were brilliant batsmen and batsmen who will be remembered for many years to come.

Well I won’t lie, I would love to play for Multan Sultans in the Pakistan Super League. After all they are my local team, but I’d be more than happy to play for any team if given the chance.