A profile of the Karachi-born off-spinner who lead Pakistan Under-16s at the start of his career and recently impressed with figures of 4/28 in Quetta Gladiators final game of PSL 6. 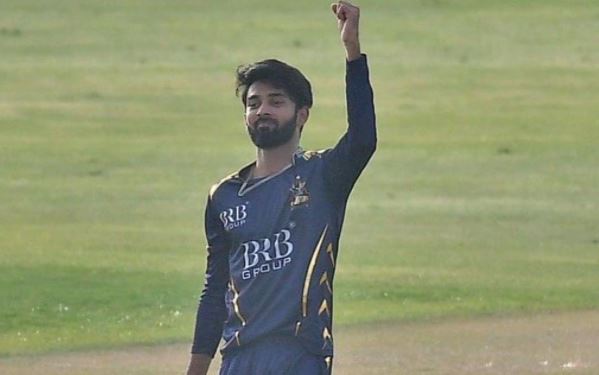 Almost all members of my family were interested in watching cricket, but no one had ever played it to any proper level. Like most youngsters of my age, I used to play street-cricket with a tape-ball and one day, I told my father that I would like to join an academy to learn to play the game properly. My father, possibly thinking that this was some passing fad for me during the summer break, decided to enrol me at the age of 10 in the National Bank Cricket Academy hoping that I would grow out of it and move on with my life. How wrong was he!

I am studying for a degree in Computer Science and have continued to take my education seriously and am indebted to my teachers for helping me keep up with my studies whilst pursuing my passion for cricket.

I played for 2-3 years for my academy during which I impressed the coaches to no end and then in 2014, I was invited for trials for Karachi Region’s Under-16 side but could not make it into the side in that year but did well enough in the subsequent 2 years. Along the way in 2015, I was appointed captain of the Pakistan Under-16s for the tour of Australia where we won the One-Day and T20 series. This was a side which consisted of the likes of Shaheen Shah Afridi and Haider Ali and for me to not only be selected for this tour but to be named as captain was a huge achievement. I was to captain the Under-16s again in the tour of UAE in 2016 where we played against Australia Under-16s. On this tour, I lead a team that consisted of players such as Rohail Nazir and Naseem Shah. I must admit that I was surprised myself when I was named captain for both these tours, but I assume the selectors saw some leadership qualities in me and this proved to be a great experience for me.

Experience of playing Grade 2 cricket since the age of 15

I have always felt that playing cricket in Karachi is not for the faint-hearted as you get to play on very tough surfaces but if you do well, then it does make things easier for you later on in life. This is why along with my appearances for Karachi and Pakistan Under-16s, I was also able to play very competitive Grade 2 cricket starting with Pakistan Railways in Patron's Trophy (Grade II) 2015/16 where I took 15 wickets in 4 matches against some high-quality players, then with Port Qasim Authority in Patron's Trophy (Grade II) 2016 to 2018 seasons taking a total of 17 wickets. Needless to say, that the experience and exposure in playing in such competitions was amazing and has helped me shape my career so far.

Moving up to Under-19 cricket

I was selected in the emerging category for Quetta Gladiators in the fifth edition of Pakistan Super League but did not get to play any games. Of course, the whole experience of training and sharing the dressing room with some top international players was amazing and an experience that I wanted to be able to draw upon in the future. My plan at the PSL has always been to interact with as many foreign players as I could to understand their mindset and learn how they plan and prepare for games.

The opportunity to put all that I had learned into practice came in the next edition of the PSL in the second stage of the tournament in Abu Dhabi when our captain Sarfaraz Ahmed told me the night before, that I would be playing the final game of the tournament for Quetta. This was an opportunity I had been waiting for a long time and my attitude was to go out there and do my best and not to worry about failure and not to take unnecessary pressure on myself. This helped me bowl so well in this game that I ended up with figures of 4/28. I suppose, the wicket of Martin Guptill on my first ball of the spell really set things in motion for me as that removed any pressure I had on my shoulders. And then the wicket of Sharjeel Khan was the icing on the cake for me as these were two very dangerous opposition batsmen. Knowing how the Abu Dhabi wicket behaves I bowled in a way that made it difficult for batsmen to hit out against me. I guess sometimes, things do according to plan, and this was that day. After that game, Sarfaraz Ahmed spoke to me at length and told me to continue working hard and I was very pleased with the support I got not just from our captain but our team management as well and I am hoping that this performance will open more doors for me in the future.

I always try and bowl wicket to wicket with the objective of frustrating the batsman into making a mistake. This strategy in T20s and 50-over matches can be very effective as in these formats the batsmen are looking to score off every ball and not being given that opportunity makes them make wrong decisions or play risky shots. As Twenty20 cricket has become very tough for bowlers, I am looking to bowl more dot-balls and use the Chinaman as a variety in my bowling and hopefully that will help me take wickets too. In terms of role-models, Sri Lanka’s Rangana Herath has always been someone I follow and copy in terms of bowling in the red-ball version of the game but when it comes to the shorter formats, I draw a lot of inspiration from and idolize Mohammad Nawaz for the way he contains the batsmen and also for his batting skills.

I am preparing myself to play in the upcoming domestic season in the 2nd XI or the first XI for Sindh and hope that at some stage, I can play First-class cricket as that is a great honour for any cricketer. In addition, hopefully, my performance in the only game I played in PSL 6 will play some role in my possible selection for the next season. Whilst I do wish to specialize as a Twenty20 player, I have no issue in playing all formats and am looking forward to wearing Pakistan colours in the not-so-distant future.