A detailed profile of Dera Ghazi Khan born batting-allrounder who has represented Pakistan U19s in the ICC Men’s U19 World Cup and was recently named as the best batter in the National U19 Championship. 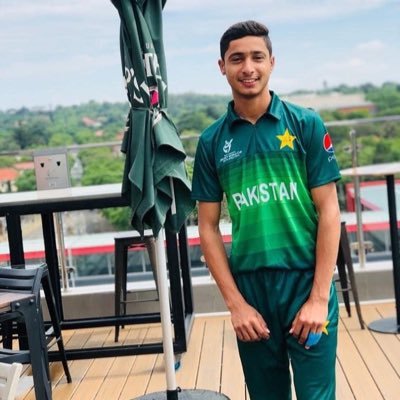 Like many other youngsters in Pakistan, my cricket journey started in the side streets of where I lived. I was not from a well-to-do family so apart from my passion for the game, there were other considerations as well, especially due to my father’s death at an early age, but I persisted with my love for cricket. The passion for the game took precedence over everything and sadly my education took a back seat, so I only studied until year 9 but my hope is to continue my studies later.

In 2015, based upon recommendation from a good friend of mine who saw my potential, I joined the Zakariya Cricket Club where I got my first taste of hard-ball cricket. In 2018, at the age of 14, I decided to make a bold move to bolster my career and moved to Lahore to play for the PakLand Cricket Academy with whom I was associated with until a few months ago.


Selection for Pakistan Under-16

I played for Multan Under-16s in the PCB-PEPSI Stars U-16 One Day Tournament 2018/19 where I scored 197 runs in 5 games and then improved my performances considerably when I was named the best batter in the PCB U-16 Pentangular Tournament 2018-19 for 309 runs in 5 matches. These performances brought me to the attention of selectors who liked my talent and picked me for two Pakistan Under-16 series.

I was selected for the tour of UAE to play against Australia Under-16s in January 2019, but my performances in the 2 One-Day games I played were not satisfactory however in the only T20 game, I was the highest scorer amongst both sides with 73* runs to my name as Pakistan Under-16s won the game by 6 wickets. This tour did wonders for my confidence as this was my first exposure to playing against another country’s side and was a great learning experience as it was away from home.

My selection for the U19 World Cup squad was confirmed after I attended the November 2019 camp at the NCA but my invitation to the camp was based upon an interesting story. In the first 3-Day game against the touring Bangladesh U16 side, the U19 Head Coach Ijaz Ahmed challenged me to score a hundred in the final innings, but I ran out of time and ended up on 80* which seemed to convince him that I had sufficient talent to be selected for the U19 World Cup squad. Later, he commented about me:

“I have taken some bold decisions by including a boy called Shehzad who was under my supervision in U16; Throughout all 8 practice games, he has been following my instructions and putting them into use; One should be able to learn and adopt to conditions fast and he can do that; He is an opener and a medium pace bowler, and he fits in my combination well. I want all of you to note what I said today because after a year or so when he does well, you will remember that how he was identified as a product by us”

These comments, coming from one of Pakistan’s finest former players, naturally filled me with a lot of confidence and I vowed to repay his faith in my skills.

I only played 2 games at the U19 World Cup, one was against Scotland and the other was against Zimbabwe but the learning from being part of this event was amazing and am sure will hold me in good stead in the future. There were some memorable moments in this tournament with our win against a very competent Afghanistan side the one that stands out the most for me.

I have followed Babar Azam for a long time and consider him my role model but amongst current all-rounders, Ben Stokes is my favourite. Of course, when we talk about all-time greats, our Prime Minister and former Pakistan captain, Imran Khan, is my all-time favourite cricketer.

I can consistently bowl around the 130 kph mark as was measured at the NHPC in January of this year and hope to improve on this in the future. I was also declared the best batter of the 3-Day National U19 Championship where I scored 829 runs in 6 matches. I am currently taking part in preparatory camp for the upcoming U19 Asia Cup in the UAE and the ICC U19 Men’s Cricket World Cup in the West Indies and of course, finding a place in a Pakistan Super League team is also on my mind and am hoping that this dream will also come true.

But above all I feel that I am making good progress to an important stage of my career which is to represent Pakistan. Whilst I am happy to play in all formats of the game, Test cricket is what really interests me most and when I do get a chance to represent my country, I will do so in a way that my performances will help in winning matches.