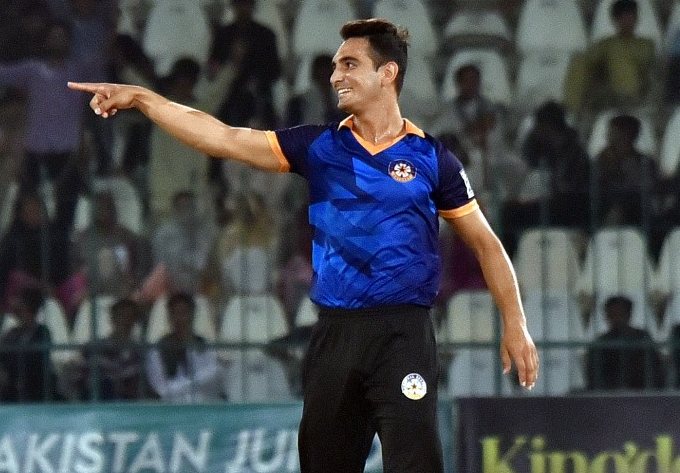 I have five brothers and all of us had an interest in cricket but just Naseem and I loved it so much that we spent a lot of time playing amongst us or in local grounds using a tape-ball. The family elders did not like us playing cricket and we sometimes got told off by our parents for this as they wanted us to concentrate on our studies, but seeing our love for the game, they let us pursue cricket as a career. I did complete my education to the matriculation level and have hopes of continuing my education at a later point in time.

The loss of our mother in late 2019 was the toughest time of our lives. It must have been even worse for Naseem who was touring Australia at that point as he had no family with him. We had no idea what to do at that point and felt helpless as Naseem was by himself on tour. For myself, this was a period of darkness when it seemed that my world had crumbled, and I had no idea what direction my life would take. Losing one’s mother is a terrible experience and even thinking about this now makes me feel very sad.


Naseem Shah as my role model

Ever since I started playing cricket, there is just one bowler I have always admired and look to emulate in my bowling style and that is my elder brother, Naseem Shah. Not only has he been the rock for our family, but he has also been my best mentor and someone who always has the time to advise me on cricket and about life in general. He had to struggle a lot once he came over from Lower Dir to Lahore and it is that experience of coming through against hardship which I take great inspiration from. His view is that one has to learn to progress in life without any help from others and to work hard to stand on one’s own two feet. He has told me to improve myself and to do justice to my talent. This is the advice which I will cherish forever and will be my guide as I go through my career. Naseem as a bowler has done wonders and made all of us very proud with his performances and God Willing, will continue to do his best for the country.

It’s an honour to be known as Naseem Shah’s brother but what I want to do is to learn from him, bowl like him and use him as my role model, and then make a name for myself and hopefully one day, represent my country as well. Comparisons with Naseem are something I take in a positive way and look to use that as a way to better myself.


Moving to Lahore, the introduction to hard-ball cricket and the progression to Under-19 cricket

In 2017 I followed the example of Naseem and move to Lahore where I started off at Pak Lions International Cricket Academy. I stayed with them for a good six months and then played District Under-16 cricket, but my main break came when I was selected by Central Punjab to play in the National Under-19 One-Day Tournament 2020/21 where I ended up with 9 wickets in 8 games. In the next season, I was picked to play for Central Punjab Whites Under 19s in the National Under 19 Cup 2021/22 where I took 8 wickets in just five games. I also had some success in the red-ball format where I played in the National Under-19 Championship 2021/22, taking 11 wickets in 4 matches, with best figures of 4/47.


Graduating to the National T20 Cup this season

I was naturally very excited when I was offered an opportunity to play for the Central Punjab senior team at the National T20 Cup this season. In my first season playing alongside some top names of Pakistan cricket, I took 6 wickets in 5 games with an economy rate of 7.65 which I felt was very pleasing. My first wicket in T20 cricket on my debut, that of KPK’s Maaz Khan was indeed very special and memorable of course. Overall, I could have done better and there is big room for improvement which is where hard work is needed by me in the future.

To have at your side, a senior like Shoaib Malik who is an international player with so much experience under his belt was a huge blessing for me. Throughout the tournament, Shoaib kept on advising me about how to bowl to certain players and what lines to bowl to which batter as well as helping me hone my skills, so that I could become a better bowler at the start, middle and in the death overs.

I am also looking forward to making my First-class debut for Central Punjab in the ongoing Quaid-e-Azam Trophy and will not disappoint, when given the chance to play. To have the services of top-class trainers and world-class coaches and to be sharing a dressing room with some of Pakistan’s finest players is truly eye-opening and is a great experience for me. Playing at this level, you also come across quality opponents such as Pakistan players who have either played a lot of international cricket or are keen to make a comeback to the national side, so they come hard at you, and it does give one extra satisfaction when one can do well against such cricketers.


Bowling to Abdullah Shafique in the nets

Whilst I wait for a chance to debut in First-class cricket this season, I have been busy training with the Central Punjab side and bowling to some of the top batters in the squad has been a great experience. Abdullah Shafique, who recently scored a double hundred is an absolute nightmare to bowl to as his sublime technique means that he can punish you for any loose delivery. This means that as a bowler I have to be on my toes when I bowl to him and am sure this experience will help me a lot going forward.

The quality of Pakistan’s pace-bowlers is amazing, and Shaheen Shah Afridi is an example of someone who has shown what exceptional talent and hard work can do. The enthusiasm with which he represents Pakistan and the way how he wants his side to win every game he plays is a great example for all up and coming fast-bowlers like myself. On top of that, the care he takes in keeping himself fit where he has bowled an incredible number of overs in the past year or so, and how he continues to look to improve himself is what I would like to emulate as well.


Bowling speeds and bowling the outswinger

My fastest delivery was measured at the Central Punjab trials last year at around 140kph. This is something that I want to improve upon as soon as possible. I have the example of Naseem in front of me who has shown what express pace can do and I wish to emulate him and increase my bowling speed as well. In the modern game, where the pitches may not be that helpful, the ability to bowl at express pace is what differentiates you and can get you wickets too. Regardless of my speed, the one part of my bowling that really gives me a lot of satisfaction is the ability to bowl good outswingers and getting wickets with catches in the slips. This is my natural bowling style and something I have worked a lot on in the past.


To play Test matches for Pakistan is my dream