"Belief from the captain and coaching staff are inspiring us to do better things" : Hasan Ali

In an interview with Saj (for FirstPost), Pakistan fast-bowler Hasan Ali opens up on 'special' Lord's win and the team's desire to push for a series win. 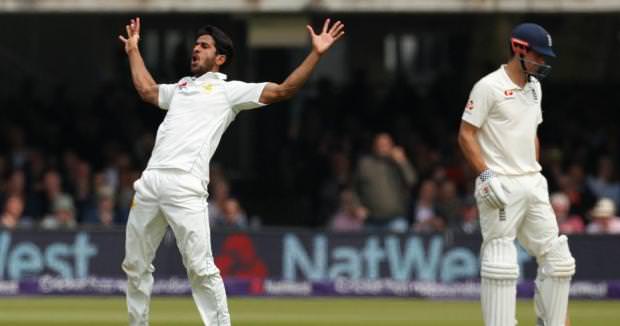 For a young man of just 23-years of age, Hasan Ali is no stranger to the term ‘underdog’ in his nascent international career of 49 games. He heard this same term when his side arrived in England last year to take part in the Champions Trophy. What transpired that summer is now a matter for the record books but suffice to say that the world of cricket was given an abject lesson in the amazing richness of talent and skills that Pakistan bring to the table, regardless of whichever format of cricket they play in.

And that is exactly what transpired at the end of the 1st Test at Lord’s when a beaming Pakistan side walked away with the honours and the lead in the 2-match series. Hasan Ali, along with Mohammad Abbas were the main instigators of an England collapse in the first innings which set the tone for the rest of the match and possibly the series as a whole.

Once again, an inexperienced and less-fancied side from Pakistan had shown what can be achieved with determination and hard-work as Hasan Ali put forward.

“Yes, it's true that some people were saying England versus Pakistan was going to be men against boys, but whether it's men or boys, the winner is the one who performs best during the match. It's a great achievement to beat England at Lord's which is regarded as the Home of Cricket.”

Lord’s, due to its historical relevance, is a much-revered venue for cricketers from all over the world and as Hasan explained a chance to play at this venue is not something to be taken lightly, “Every young cricketer wants to play at Lord's and to perform well. I've played a One-Day international at Lord's previously but to get the chance to play a Test match at Lord's was just a memorable experience and a unique experience. It's inspiring for players to get the chance to play there and what made this such a fantastic occasion was that we won in style. It's been a brilliant few days for a team that not many people expected to do so well.”

A squad of youngsters, with 5 names who had not played a Test match before arriving in the United Kingdom, needed guidance to put together a performance which has once again, like in the Champions Trophy, made them heroes in the eyes of their countrymen. To Hasan Ali, it is the confidence provided by the leadership of Sarfaraz Ahmed as well as the tutelage of Head Coach Mickey Arthur which are all important components of the team dynamic that drives the Pakistan side.

“The atmosphere within the squad is a great help as the likes of Mickey Arthur and Sarfaraz Ahmed always say to me and the other players in the squad that you are the best, you have the skill, you have all of the ingredients to be successful and they have the belief in us. These are the things that are really inspiring the team at the moment and taking us forward as a group. That belief from the captain and coaching staff are inspiring us to do better things.”

The 2016 tour of England by Pakistan was one that had some iconic images associated with it. The ‘push up’ celebration at Lord’s and the triumphant walk by a Pakistan team consisting of the two stalwarts, Misbah-ul-Haq and Younis Khan, around The Oval are all images etched in the memories of Pakistan fans. Whilst the 2018 Test tour of England by Pakistan does not contain the two batsmen, nor does it have the presence of an injured Yasir Shah, the manner in which the young guns have picked up the baton is truly inspiring as Hasan described.

“We came into the Lord's Test match without Misbah-ul-Haq, Younis Khan and Yasir Shah but cricket is all about comings and goings. Great players retire and get injured, so you have to find replacements and they have to find their feet in international cricket. Misbah and Younis' achievements will always be remembered fondly and respected but we have some very good batsmen in their own right in the team at the moment. We have new guys like Imam-ul-Haq and there are also a number of other talented youngsters in the squad, as well as experienced guys like Sarfraz Ahmed, so the combination is a balanced one I feel.”

The manner in which the Pakistan bowling attack systematically dismantled the much-vaunted England batting line-up which contained some big names will be discussed for days to come but it seemed that Pakistan came well prepared for the task ahead as Hasan explained, “we had really focussed on the weaknesses of the England batsmen before the match having watched videos of them. In all honesty there were no major plans for the likes of Joe Root, but at the back of our minds we knew the opposition batsmen's weaknesses.”

For a young man who took part in only his third Test, the maturity in attitude from Hasan Ali is inspirational for many up and coming youngsters and his words about his own performance at Lord’s need to be considered carefully.

“I feel that as a cricketer it's all about learning from your mistakes and carrying that forward to the next match and beyond. The Lord's Test was only my third Test match and there was some pressure on me as I got injured in the last series, so I was making a comeback of sorts, but I came into the match against England at Lord's with a lot of confidence and was totally focussed on the task at hand.”

Whilst Hasan Ali played a major role in Pakistan’s victory at Lord's, it is true that he nearly missed the match due to an unfortunate injury to his hand and some might argue that the fate of the match may well have been different if that had been the case. Thankfully for Pakistan, Hasan did not let this injury stand in the way of his participation and is now looking forward to playing a more important role in the second Test.

“The injury I suffered on my hand was uncomfortable but there was no way I was going to let it miss the match at Lord's. Yes, there was some discomfort, but that pain soon disappears when you win. I'll be fine for Headingley, the injury is not a big issue now and it's not hampering me.”

With a 1-0 lead in a 2-match series, the temptation to relax and sit back on their laurels would be a big one but Sarfaraz’s side are in no mood of taking prisoners and the message from the team to the world as Hasan explained is a simple one, “we won't get complacent or overconfident after the win at Lord's. We have to remain professional, yes, we have won, but it's only one match. It's a big win and there is no way we will get overconfident. The next Test match at Headingley is a very important one and our aim is to win that match also and win the series 2-0.”