17 year old Imran Butt is a top order batsman from Lahore who made his first class debut less than three months ago. Since that debut in December he has made over 700 runs in only nine first class matches at an average of over 61 including two centuries and five half centuries.

Speaking with PakPassion.net, Imran explains how his interest in cricket developed, the challenges presented to him in his debut season in first class cricket, his plans for selection in the Pakistan Under 19s and beyond. 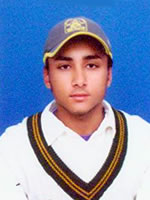