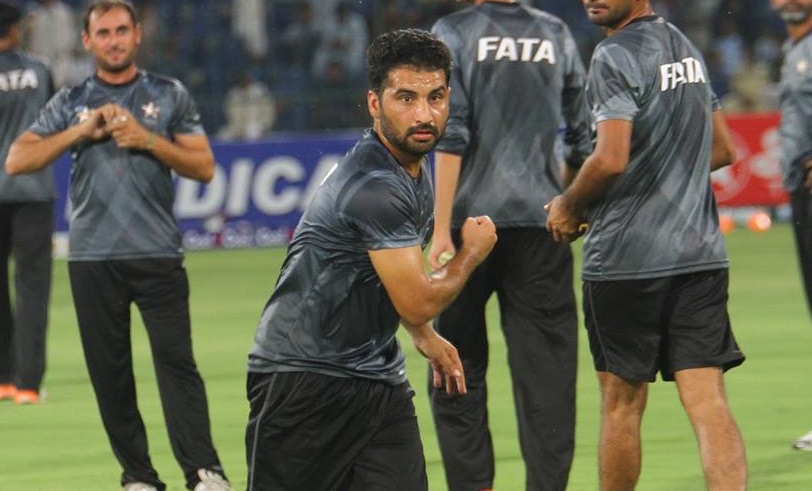 I was born in Bajaur Agency and have completed education up to the FA level. I started a degree course at the Islamia College in Peshawar but had to give up after four semesters as I wanted to play league cricket in Bangladesh. I do not intend to resume education as cricket takes most of my time and the university will not give me time off to pursue my career on the side.

Like many others, I started playing cricket in the streets. My interest in cricket was fueled by the fact that my uncle, Shad Mohammad, was an accomplished wicket-keeper batsman and I used to bowl leg-spin to him all day. He used to tell me to work on my fielding and bowling all day and that advice helped me build my passion for cricket and that is the reason I am where I am today. My father passed away when I was young and there was some resistance from my uncles to my wasting time playing cricket. However, with the Almighty’s help and my own hard work, I have managed to stay the course and made cricket my profession.

I was always impressed by the bowling style and abilities of Mushtaq Ahmed. He has inspired me throughout my career. I have had the honour of meeting and being coached by him a few times and I can’t tell you how proud I am of meeting him in person. Apart from that, I have been told that my bowling action resembles the legendary Australian bowler, Shane Warne. I do love his bowling and but I really can’t say if it has been my intention to copy him, but my run-up is definitely very similar to the great Australian leg-spinner.

I really admire Yasir Shah and know him well. I first came across him when I was playing for Abbottabad region where he was representing Under-19s for Abbottabad. As a youngster I was in awe of Yasir’s skills and he also used to spend time with us showing us some tips about leg-spin. He showed us how to bowl the flipper and other variations. Not only would he teach us but then would check how well we were bowling these deliveries. He was an excellent teacher for younger spinners.

I played under Under-15 for Abbottabad and Under-19 for FATA and then in 2015, I got my chance to play First-Class cricket for the first time. My First-Class debut which was against WAPDA was something I will remember for a long time as I took four wickets in that game. Even though we lost that match, knowing that I could compete at the highest level in the domestic season gave me great satisfaction. I also knew that playing well at this level was the stepping stone for a place in the national team and performing so well did make me very proud. The WAPDA team management was so impressed that they even offered me a place in their team should I want to move in the next season. I took five wickets in four-day games which is pretty decent given the fact that our team has good fast-bowlers. Opportunities, therefore, to take wickets for me as a leg-spinner were limited but still I feel I did well in the last season. The Quaid-e-Azam Trophy for this domestic season (2016-2017) has started and I intend to put in my best performances. I want to ensure that I give myself the best chance of being noticed by the selectors which will also fulfil my dream of representing my country in the future.


Performances at the National One-Day and Twenty20 tournaments

First of all, I must thank the Pakistan Cricket Board for creating such opportunities for Pakistan based players and our local audiences. Both tournaments were held along the same lines as the Pakistan Super League and were of the highest standards with television coverage and good crowd attendances. The kind of exposure such tournaments have given to me is amazing and the PCB must take full credit for successfully organising these events. Personally speaking, I was very happy with my performances for FATA in these tournaments. I managed to pick up seven wickets in the One-Day cup and in the recently concluded National Twenty20 tournament, I took six wickets which is excellent for my career progress.

I am obviously still new to the domestic scene but if I have to name one performance which gave me a huge boost in confidence and satisfaction, that has to be my spell against Karachi Whites during the recently concluded National Twenty20 Cup where I removed a well-settled Asad Shafiq who was then batting on 62. No other bowler had been able to trouble him in that match so I felt very proud of my achievement, especially given that Asad is a world renowned batsman.

I understand that as a leg-spinner, there are many types of deliveries which one can master but whilst I am working on the googly which I feel is in a decent state for me at the moment, I do prefer to bowl normal leg-spin as that seems to give me the best results. At the end of the day, if you cannot bowl the correct line then no amount of variations can help you achieve your goals.

Like any other bowler, even I have a great desire to improve my batting. I am spending a lot of time in the nets but obviously as a bowler there is only so much time you can devote to batting. I am lucky that the FATA batting coach has been helping me a lot to work on issues with my batting and I am feeling much more confident about this aspect of my game.


Selection for Patrons XI squad for match against the West Indies

I cannot describe in words how I felt when I heard that I had been named in the squad which will play the day/night game against the West Indies team. I was in a part of my home which has no mobile signal so I didn't know about this news until my relatives had to come over to me to tell me that they had seen my name being flashed across television screens. I also got calls from the FATA management to congratulate me. I am overjoyed but I know that the real hard work lies ahead and if given the chance to play, I will need to perform well and justify my selection. Who knows what other doors a good performance in this game might open for me in the future?

I am a great fan of Test cricket and feel that success in this form of cricket gives you the most satisfaction. However, it is also true that one prefers the format where one can perform the best in. I would prefer to play Test cricket for Pakistan but I am happy to serve my country in any format where I can give the maximum benefit to my team.