A comprehensive profile of an upcoming, young off-spinner from Karachi who impressed one and all with his displays for UBL in the recently concluded Departmental One-Day Cup. 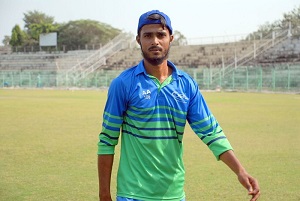 We are a cricket playing family and my elder brother, Asif Ali, used to play club cricket regularly so my interest in the game was sparked by watching him play. There was a local academy in my area at the Steel Town Gymkhana and my elder brother would practice and play cricket there, so I would also go with him when I was about ten years old and that really helped me appreciate the game and also build interest in cricket.


Playing Under 19 Cricket for Thatta

My bowling was really liked by others and I rose up through the local Under-15 and Under-17 system but it was a little difficult for me to get a place in the Karachi Under-19s as I used to live a little further away from Karachi. So, I had no option other than to play for Thatta in 2011, which is one of the interior Sindh teams. I didn’t do too well in the first year, taking just 14 wickets in the Inter-District Under 19 Tournament but I excelled in the second year (2012) where I took 37 wickets in just 5 games. I then moved to National Bank of Pakistan (NBP) Under-19s and played for 2 years in their team but did not do too well and then came back to play for Thatta once again. This time around, I did even better, taking 39 and 41 wickets respectively in 2-day and 3-day Inter-District Under 19 and Senior competitions in the 2013/14 season.

Due to some exceptional performances for Thatta in the 3-day Inter-District Senior Tournament in 2014 where I took 40 wickets in 5 matches and scored close to 300 runs, I was picked up by HBL to play first-class cricket in the Quaid-e-Azam Trophy Silver League in November 2014. I did not play many games in this tournament and did not get many opportunities to bowl which is why I ended up with just five wickets in two matches. Unfortunately, it was difficult for me to establish a place in the HBL first-class team as there were some excellent players in the side already. I had no option but to move to Grade 2 cricket in the 2016/17 season where I played for Candyland. Here, I was able to make a name for myself as I took 33 wickets and was the second-highest wicket-taker in the Patron's Trophy (Grade II) 2016/17 tournament.

Success in the National One-Day Cup for Departments

Nadeem Khan, the manager of the UBL team picked me to play for the team in the Quaid-e-Azam Trophy in 2017. However, the team was doing so well and all bowlers like Sohail Khan, Ehsan Adil and Mir Hamza were in such good form that I just did not get a chance to play in any game. Although it was a little disappointing for me, yet I am glad that UBL did really well and just missed the final slot by a tight margin. The One-Day Cup for Departments which followed this tournament was a different story though. In this tournament, I played 8 games for UBL and took a fantastic haul of 14 wickets at an economy rate of 4.53 and on top of that, my contributions helped in our team winning the tournament which made me really proud of my achievement.

It will surprise many that I as a bowler have a batsman as someone I admire, but Younis Khan is my role model. The manner in which he has carried himself in the past is a lesson for all of us youngsters. To this day, he takes care of his fitness and when he is on the field of play, he is totally focused on the task of playing cricket. Whenever I have met him he has told me about the effort involved in getting to the stature that he has today and that is a fine example for me to follow too. By following his lead, I feel that I am also doing well so he is definitely a source of inspiration for me.


Experience of playing alongside top cricketers in domestic cricket

I have been very fortunate to play alongside some excellent players, some of whom have also represented Pakistan such as Hasan Raza, Imran Farhat, Humayun Farhat and Abdur Rehman who is a spinner himself and has given me a lot of support. Since I was the youngest in the Habib Bank team when I made my first-class debut, I received a lot of guidance from the senior players which has really helped me in my career so far.


The wonderful atmosphere at UBL

When later on I moved to UBL, I experienced something even better as the environment was such that I never felt like a new player amongst a well-settled outfit. I think a lot has to do with Nadeem Khan who is our manager and treats each person like they are stars and the team depends on them which gives a lot of confidence to the players. There is no difference in the way I am treated with respect there as compared to the likes of more experienced players such as Shan Masood or Umar Akmal. To top that, playing under the captaincy of Younis Khan was literally like a dream come true for a young player like me.

I would have liked to have played in the One-Day Cup for Regions but sadly that did not happen. I am looking forward to being selected for participation in the Pakistan Cup (50 overs) competition later on and also to making a comeback in the Quaid-e-Azam Trophy later this year. I was also hoping to be named for the Multan Sultan’s squad in PSL 3 but that was not to be either.

Of course, there is sometimes need to bowl like that but my heart is not in that type of bowling. I would rather bowl like Nathan Lyon or Ravi Ashwin and those are the types of bowlers I look up to for inspiration in my bowling. Hopefully my performances will catch the eyes of selectors and I will one day play for Pakistan which is my aim.